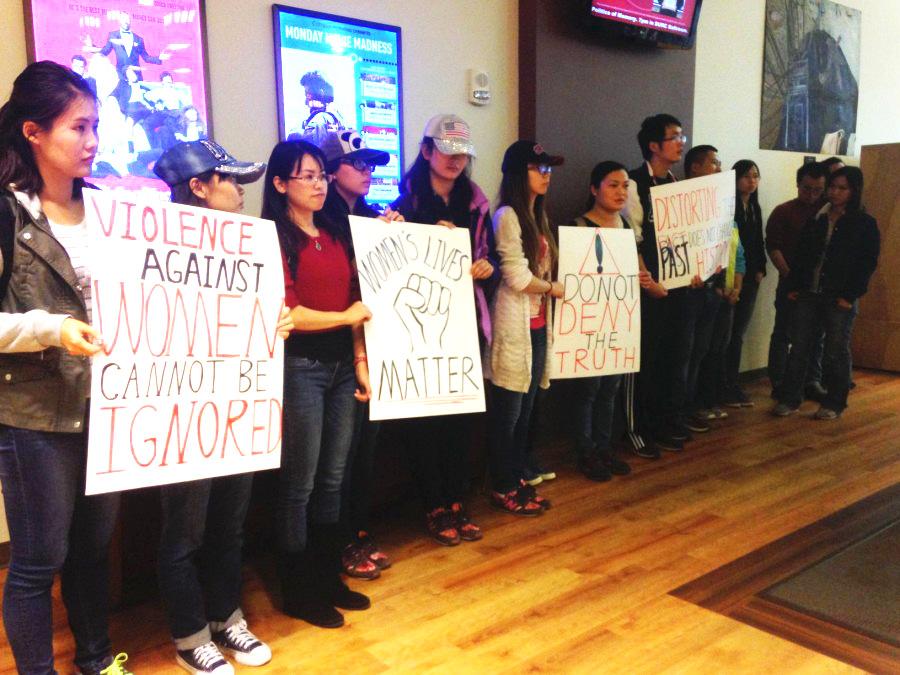 On Tuesday night, Central’s SURC building was center stage for an ongoing political battle about sex slavery, and the legacy of Japanese Imperialism during the first half of the 20th century.

Director Yujiro Taniyama screened the U.S. debut of his film “Scottsboro Girls” in the SURC theatre, as well as allowing a few speakers to air their long-winded theories in support of his film before-hand. Taniyama’s film attempts to deny the nearly universally accepted historical crime of organized sex slavery, or comfort women, endorsed and often facilitated and ran by the Japanese government during World War II.

In response, scholars from Central and around the nation rallied in a show of solidarity against the film’s premiere. They conducted a reading of comfort women testimony in the SURC pit at 5:30 p.m., then moved upstairs to the SURC ballroom adjactent to the film’s screening for a panel of experts to discuss the issue at 7 p.m.

Clad in ill-fitting overalls, and a baseball cap with a faded American flag, Taniyama made the rounds before his event was scheduled to begin at 5 p.m.

“I have come to America not to stir up hatred,” Taniyama said. “I hope I can really talk.”

Koichi Mera, a business professor from the Univerity of Southern California, gave a presentation for Taniyama before the film in the SURC theater. Mera also promoted the idea that comfort women were not sex slaves.

A group of concerned students was protesting the screening outside the theater. They said they did not believe it was appropriate to show Taniyama’s film at Central.

Downstairs in the SURC pit, student volunteers were busy preparing for the reading of comfort women’s testimonies.

“The problem is that this is being phrased as two-sides,” Patience Collier, a senior history major, said. “There’s no controversy over whether or not it happened.”

Collier said that she does not see any legitimacy in Taniyama’s claims.

Collier said that they are not anti-Japan, but that all governments must acknowledge and accept war crimes and human rights violations that they have committed.

Another student volunteer, Lauren Gilmore, senior Asia-Pacific studies major, said that she has studied this issue in many of her classes.

“I think it’s important to spread information about these woman, and not traumatize them anymore,” Gilmore said in reference to the stress that comfort woman deniers inflict on the surviving comfort women.

Mark Auslander, museum director, and Jay Ball, assistant theatre professor, led the reading of comfort women testimonies in front of a display about the issue.

There was a solemn silence among the crowd of around 175 people who gathered to watch and listen.

During the reading, some of the volunteers became visibly shaken. One of the more emotional passages was an account written by Yuan Zhulin, and read by a student volunteer. It reads as follows:

“Life became even more miserable after I became pregnant. I realized I would die sooner or later as a result of the abuse by the Japanese soldiers, but I didn’t want to die.”

Other passages recounted in graphic detail multiple accounts of rape, murders and other grievous abuses inflicted upon comfort women.

“This is a very good opportunity to know the truth about Korean and Japanese history,” Yoo said.

Yoo said that she does not want the Japanese government to distort or revise history.

“We just want to share the facts,” Kang said.

Upstairs in the theater, the initial crowd of around 50 who had come to Taniyama’s presentation had dwindled to around 30 by 6:30 p.m., and the film had not yet started.

“It was really weird, he didn’t give much evidence for the things he was saying,” Masters said.

Masters said that she didn’t know much about the issue, but wanted to learn more, and was planning on attending the scholars panel held at 7 p.m.

In the theater, Taniyama took the stage before his film.

Launching into a rambling tirade, Taniyama proceeded to let loose with a speech describing those who had left his presentation as closed minded.

He took aim at the ‘liberal media,’ in America for attempting to censor his views, as well as bringing up his own testimony that he claimed had never before been heard by ‘western media.’

Downstairs, after the testimonial reading in the SURC pit wrapped up, the crowd moved upstairs to the SURC ballroom for the scholars panel.

In the SURC ballroom next door, where the scholars panel was being held in response, Bang-Soon Yoon, a political science professor at Central, gave the key note speech.

In it, Yoon described the widely accepted position of the vast majority of credible scholars: that tens or hundreds of thousands of women were used as sexual slaves by the Japanese empire between the years of 1910 and 1945 in China, Korea and other Japanese colonies.

Yukiko Shigeto, professor of foreign language and literature from Whitman University was another speaker on the panel.

Shigeto said that framing the issue as a two-sided debate between different perspectives casts doubt on the legitimacy of the historical fact of comfort women and sexual slavery.

Justin Jetsy, Asian literature and language professor from the University of Washington, further put the historical facts of the issue to rest.

“There is no shortage of documented evidence about this issue,” Jetsy said.

The Central and Ellensburg community also showed where they stood on the issue.

Of the 50 or so people initially watching Taniyama’s presentation and movie, only a handful were left by the time his movie began. Nearly 200 people watched and engaged in the comfort women testimony and scholars panel.

For more information on the political and historical context of this issue, see here.

Jury trials in the Kittitas County Lower District Courts have been suspended until Jan. 13 due to a spike in coronavirus cases and wanting to “push ... 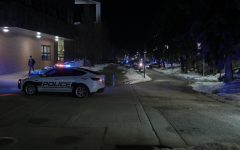 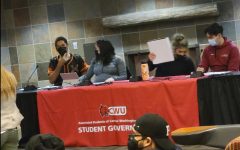 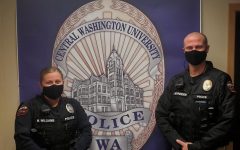 Editorial: How I got the story… And ended up with more questions