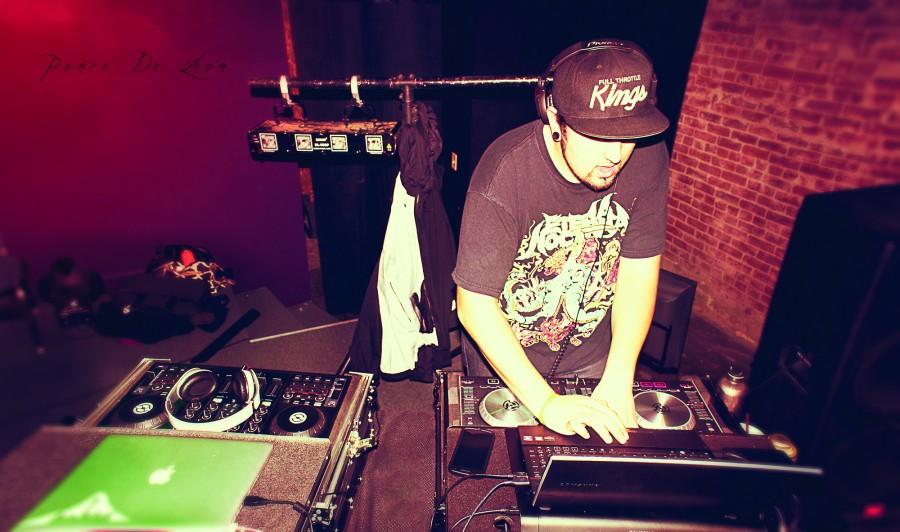 Aleks Kimball-Moreno is a monumental part of the changing party and music scene in Ellensburg; home to one of the biggest party schools in the state.

Wiesen, a 24-year-old Ellensburg resident who has been heavily involved in electronic dance music for nearly 11 years, is one of the people who helped teach Kimball-Moreno what he knows.

Kimball-Moreno is tall, with dark shaggy hair that pokes out from under a baseball cap, and gauged ears. He graduated from Central last August with a bachelor’s degree in political science, but by then his aspirations had already been swayed in a different direction.

For the last two years, he has been DJ-ing at public and private events throughout Ellensburg.

He lives in Ellensburg with his girlfriend in an apartment near campus. Posters for raves and electronic music festivals are pinned throughout his kitchen, and even the refrigerator is decorated in colorful posters. An entire room is dedicated to the equipment he uses to mix his music, and electronic songs play constantly in the background.

“I really hadn’t ever thought about doing it until I was actually at a house party one night,” Kimball-Moreno said of his first gig two years ago.

His first gig was a formal party on the Westside, with a DJ already set up to play the show. However, not too long into the evening it was obvious to the host, Anthony, that the hired DJ wasn’t meeting his expectations.

Anthony asked Kimball-Moreno if he would step in to play, since he already knew his phone was well-equipped with good music. Kimball-Moreno was happy to say yes for a friend.

“It wasn’t really DJ-ing obviously, but I just started picking out songs and playing some, and everyone loved it,” Kimball-Moreno said.

There were over 100 people at the event. Once he began to play his music, the crowd rose to their feet to dance and enjoy the party. After that, Kimball-Moreno thought that he could attempt to pick up DJ-ing.

“Took me a while, I wasn’t very good at first — no it was pretty rough — but yeah,” Kimball-Moreno said. “I started getting the hang of it and I don’t know, it just kind of took off from there.”

In the months following that first party, Wiesen began taking Kimball-Moreno to shows and getting him to play in front of bigger crowds.

“He’d get frustrated (from practicing), but he never stopped and it showed,” Weisen said. “It kind of took him getting that frustration out of the way to show that he was really serious about this, that this was something he really wants to do. And now it’s all he thinks about, all he talks about.”

Soon, Wiesen went to The Starlight Lounge, a popular Ellensburg bar, to set up a regular show. He brought Kimball-Moreno along.

They got the gig, and began DJ-ing at the bar together on weekends. This is where Kimball-Moreno learned how to mix not just EDM songs, but also hip-hop, Top 40 and other genres.

“That’s definitely something that I learned at the Starlight, to an extent,” Kimball-Moreno said. “Also just playing house parties and just kind of practicing at home. Really I just spent a lot of time sitting in that room right there just messing around for hours, just figuring stuff out.”

Owleks is the stage name Kimball-Moreno goes by. He offers many different types of music within the EDM genres. His favorite genre to play is called Drum and Bass. Local artists have even coined it as his sound because he is the only one who plays it.

“It’s a UK genre, kind of hard-hitting, fast electronic music,” Kimball-Moreno said. “I love it. I guess people have been eating it up when I play it.”

Listeners can also hear dubstep, trap, trance, electro house and moon baton at his shows. While he wants to play a wide variety of music for his rising fan base, Owleks said he wants to narrow the sounds released under his name, in order to have his own original sound.

Although he explains his DJ work as a hobby, Kimball-Moreno takes his shows very seriously.

“I just want to come across as someone who really does care about what I do, and I care about the quality of what I do and so by doing that, I tend to get a little stressed out and I like for things to be perfect,” Kimball-Moreno said.

Wiesen has seen the stress bubble over at times, but once the music starts and the lights begin flashing, the stress and frustration is all worth it.

All the hard work Kimball-Moreno had been putting into DJing was obvious while playing one night at the Kittitas County Fairgrounds. About 30 college-aged kids sat around a dark room with flashing colored lights lining the walls, waiting for the beat to drop.

It was in front of this small group that something changed in Owleks’s DJ-ing, and he went from being a comfortable performer to a confident creator.

Wiesen and Kimball-Moreno began “beat-matching,” which occurs when two DJ’s match songs and sounds on the exact wavelength.

“Everything clicked, everyone started getting up and dancing, and everyone had been sitting before,” Wiesen said, adding that even though the audience was small, something in the room just felt right.

It wasn’t the first time Kimball-Moreno felt the music and mood combine to create pure bliss.

“I had the most amazing time of my life, and it was the first time since my dad died that I had been happy that I literally like broke down in tears,” Kimball-Moreno said. “And it was because of that way the music makes you feel.”

Kimball-Moreno explained that the music made him feel as if he could finally express himself, and from that day on, he admits to being completely sucked in by it.

“It hits you at the heart, it touches your soul and it allows you to release all this energy and joy,” Kimball-Moreno said of EDM.

He now finds it difficult to listening to other genres, because he feels they are missing the same raw quality.

According to Kimball-Moreno’s girlfriend of almost three years, Brook Welsh, he has a connection with his work and audience.

“He has developed a more emotional connection with what he does,” senior fine art major, Welsh said. “When he can spread this connection to his audience through music, he’s overwhelmed by the happiness and bliss.”

Because Wiesen has been DJ-ing his own electronic music since middle school and produced his own sounds, he gave Kimball-Moreno advice on how to put together a strong set; something he could be proud of.

Wiesen told him to “build sets like your favorite song: There is a reason why you love it, because you love all of it. There isn’t one part that you don’t like.”

Kimball-Moreno spends entire days putting together a one-hour set that may contain 60 songs, and it may still need to be tweaked later. He says there is much more that goes into DJ-ing than people may think. But, because a laptop is the main piece of equipment used for the sets, people assume he’s not mixing anything during the actual show.

Although he is not making any money to put toward bills at the moment, the skill of DJ-ing has been increasingly sought after. Forbes magazine published in 2012 that the highest-paid DJ in the world was Skrillex, the DJ who put EDM on the mainstream charts, who is worth $15 million.

Electronic dance music has recently gained popularity all over the world, and with it has travelled the culture that is embedded within the genre.

The idea of “PLUR,” which is the acronym for peace, love, unity and respect, is at the root of the EDM culture and the rave scene. Attached to each word is a physical representation of the word in a hand gesture that is shared between two people.

A rave, which is a concert or music festival that features EDM, has many aspects that separate it from concerts in other musical genres. According to IBNLive.com, drugs, teenagers, brightly colored plastic jewelry called “Kandi” and high admission fees are examples of more recent rave trends.

“I just feel like sometimes it’s not about the music anymore, people are forgetting about that so much, and thinking about just party, party, party,” Kimball-Moreno said.

He said there is something different about electronic music, that it has its own individual culture, and that it is still gaining popularity.

“If people are still willing to go get crazy for a day and have the time of their lives, then yeah I think it’ll be around for a while,” Kimball-Moreno said of raves on the grand scale.

As for the effect the EDM movement has had on the local community, things have been changing in the party scene. A year ago, it was uncommon to see a live DJ at a party, but now it’s the norm.

“Just seeing what has happened here in Ellensburg, going to a party with no DJ at a party seems really weird,” Kimball-Morena said. “It’s just not the same anymore.”

Even though Owlecks is not alone in the DJ category around town, he has made his personal mark. Wiesen said he has developed a good fan base in town, and his moon baton songs have become popular at local parties.

“He has very good stage presence. People know his name,” Wiesen said. “So I’d say he has been a big part of creating an EDM movement in Ellensburg.”

DJ 13onez, which is Wiesen’s stage name. Through the changing party scene, they are all working on ways to enhance communication between the DJs.

Together, these DJs have created a community called “The DJ Union,” based loosely after something Western Washington University students had made for their EDM community. The union is an open dialogue for all the local DJs to communicate about equipment, sets, parties, etc.

Wiesen is planning an outdoor music festival in Ellensburg for this coming September, where he plans to close off 5th Avenue, and fill it with DJ’s spinning Hip Hop and EDM. Kimball-Moreno is happy playing small shows in Ellensburg, surrounding areas and even the westside until he moves to Bellingham this coming fall. Welsh plans on transferring to Western Washington University, and because the EDM scene is more prevalent in that area, Kimball-Moreno will have more opportunities to DJ. He also hopes to start working on producing his own music.

“Two years ago I was struggling to even mix a song together, I didn’t even really understand the concept of the software,” Kimball-Moreno said. “It’s been a lot of trial and error, but I feel a lot more comfortable with where I am now. It’s just automatic, I can do it now.”