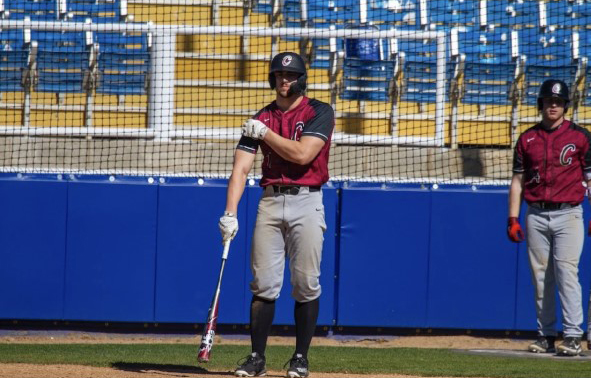 Junior centerfielder Adam Fahsel was named baseball GNAC player of the year for the 2022 season. Despite CWU having a 14-35 record this season, Fahsel had a career individual season in which he had career highs with eight home runs, 30 RBIs, 66 Hits and a .351 batting average.

Fahsel said it was awesome to learn he had won the award because of the talent that the GNAC has.

“It was really cool when it happened because there are a lot of good players in this league,” Fahsel said. “So being named the best [player] for this season was really an honor, so I’m grateful for that. It just goes to show the hard work that I put in all came to fruition this year.”

According to Fahsel, the biggest difference he made from last year to  this year was working with a personal trainer during the off-season and gaining 25-30 pounds. He said that this allowed him to gain more power when not swinging with 100% effort.

“I wanted to gain effortless power,” Fahsel said. “I always had power, but it had to be on a max effort swing, so I wanted to have more weight and strength behind my swing so that I could swing at 80% and hit balls as far as my max swing. I wanted to put on this weight and strength, so I could take an easier swing and stay more consistent and hit better pitches.”

Fahsel said while this was a tough season for the team as a whole, there were some positives to come out of it.

“We did have some good times during the year, so you have to look back at those games that we pitched well and hit well. So you have to look back at what the formula was in those games on why we won those games,” Fahsel siad. “Looking forward, you’ve got to realize we had a really strong offensive unit, so if we can figure out a way to play better defense and help out our pitchers then next year should be smooth sailing.”

Because he will be a senior next season, Fahsel said he knows he needs to step up and be a leader for the team. However, he said he wants to lead by example as opposed to being a vocal leader.

Fashsel has high expectations for the team to perform well next year and that starts with putting in the work during the off-season.

“The team is going to be good,” Fahsel said. “Everybody has a sour taste in their mouth from what happened [last year] and we kind of had expectations coming into this year and it didn’t go very well. Being punched in the mouth everybody will be focused in our practices and taking that into the weight room and over winter break by making sure we’re staying locked in and putting in a good off-season of work.”

Similarly, Fahsel has high expectations for himself next season.

“This was the first full season I have played and this is what I did so in my head it’s time to do it again,” Fahsel said. “I know what it took last year with my training regiment and lifting in the off-season. If I did it last year I’m going to do it again.”