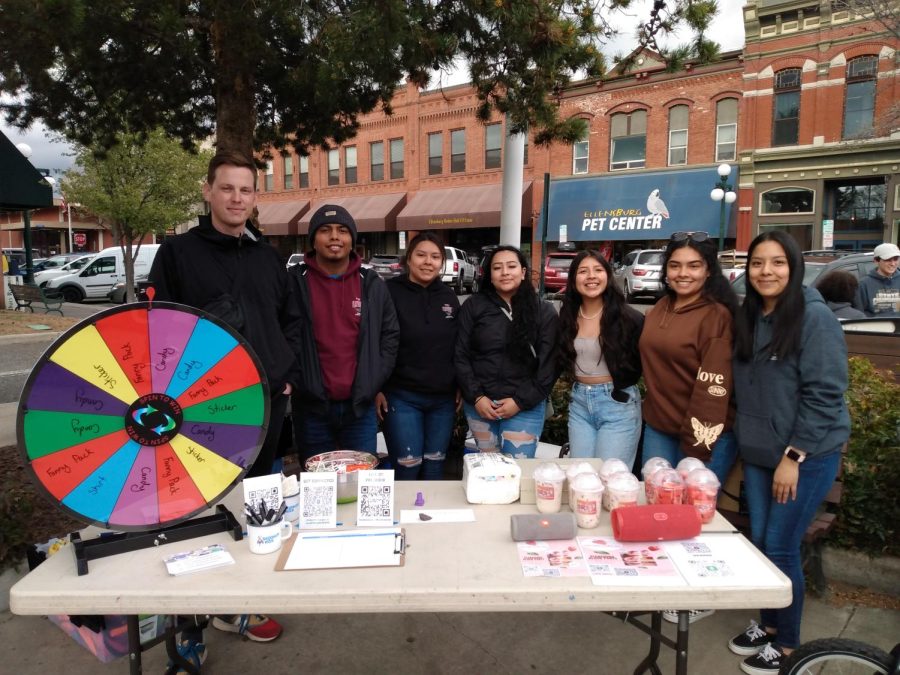 The aroma of street tacos from El Loco Food Truck and some reverberating reggae beats rang through the air around the Rotary Pavilion in downtown Ellensburg as over 50 people celebrated the first ever Day of Action on Thursday, May 12.

The Day of Action was hosted by Provost Fellow Dr. Teresa Divine, the Museum of Culture and Environment (MEC), the Diversity and Equity Center (DEC), the Student Leadership, Involvement and Community Engagement (SLICE) office and CWU Business Leadership and Management students for their Capstone project.

The goal of the event was to raise awareness about social justice and bridge the divide separating the CWU community from local Ellensburg residents.

The event kicked off at 9 a.m. in the SURC pit with a letter writing campaign and opening remarks. Two workshops were hosted later in the day in the DEC, Black Hall 105, called Agents of Social Change and Savior Complex and Voluntourism.

An Activist’s Roundtable was held at noon where community members could ask questions to a panel that consisted of Stephanie Wickstrom representing Apoyo, Tylene Carnell from Helen House, Hope Amason from the MEC, and Law and Justice Professor Todd Mildon from Central Washington Justice for Our Neighbors.

At the roundtable, the moderator asked what activism meant to each panelist and what inspired them to get involved with activism.

Mildon replied, “For me at least, activism is the pursuit of justice. When my grandmother was young, many of her classmates were hauled away from their lives under FDR’s executive order 9066, which interns Japanese Americans at the beginning of WWII. She fought against that. All my life I’ve had that in my mind as an inspiration for seeking justice for people who are harmed by terrible governmental decisions.”

The day progressed to a Unity March following a sign-making party at the DEC. A full spectrum of causes were addressed on the signs, from climate change to sex worker’s rights, to bodily autonomy and immigration reform.

The march traveled from Black Hall down University Way, left onto Main Street, and back down Fifth Avenue to the Rotary Pavilion where the metal bull sculpture and a roaring block party awaited.

Cassidy Peters, junior in law and justice, said it was important to show people in Ellensburg that they’re not alone when standing up against injustices.

“An event like this is really cool because people with different opinions and all these different beliefs they’re marching for, they can just come together and show the town,” Peters said.

Various clubs, organizations and nonprofits played games, gave out treats and sold beverages at tables around the perimeter of the pavilion.

Jaeda Nelson, a senior in business leadership management, helped plan the bloc party as her capstone project with three other students.

“A lot of the times, especially with social justice, community wellness, they’re leading in isolation with their own group, so we wanted to force people to talk to each other,” Nelson said. “That’s why they’re all partnered together for every table, we paired them and we’re hoping it will spark some collaboration or shared activism.”

Gallery One was partnered with the Equity and Services Council and handed out free posters. The Central African Student Association (CASA) shared a space with Central Washington Justice for Our Neighbors. Next to them, the Black Student Union (BSU) played word games, shared photos and handed out sweet treats.

Eburg Veg, a local food blogger, gave out vegan cupcakes and shared a table with CWU’s Presidents United to Solve Hunger (PUSH) chapter. Skookum Kids, an organization that connects kids with foster homes, and the LatinX Student Organization offered a wheel to spin for prizes and sold strawberry milk drinks.

Apoyo and Jerrol’s partnered together, as did the Ellensburg High School Environmental Club and Kittitas County Friends of Animals as well as Movimiento Estudiantil Chinana/o de Aztlan (MEChA) and the Latino Community Fund.

Jaden Barrie, senior in business leadership management and a planner of the event for his capstone project, said he wanted to bring the local businesses together with the CWU campus.

Barrie said he wanted, “Something that stimulated conversation between people. While they might be different, they can share some of the same values or they can have different values and they’re able to communicate that and disagree in a positive way.”

Barrie said he hoped participants would be able to have a fun time while talking about heavy topics in a safe environment.

CWU alumni Joey Packer said the event was “absolutely amazing” and hoped to see it happen every year.

“We don’t live in a vacuum at the university, there’s high school students here too,” Packer said. “It’s important because a lot of students come from out of town, usually the other side of the state or different states completely, and so it helps build a foundation, a network of people that you can talk to.”

Mildon said he hoped students connect with mission driven work through the event.

“I hope this helps students connect with the community by volunteering and interning and thinking about careers in social justice and in the non-profit sector,” Mildon said. “The more people you talk to from more backgrounds, the more you humanize the other and start developing empathy for other peoples’ challenges. People already know what they need for the most part. Mission driven work should just help them get what they already know they need.”