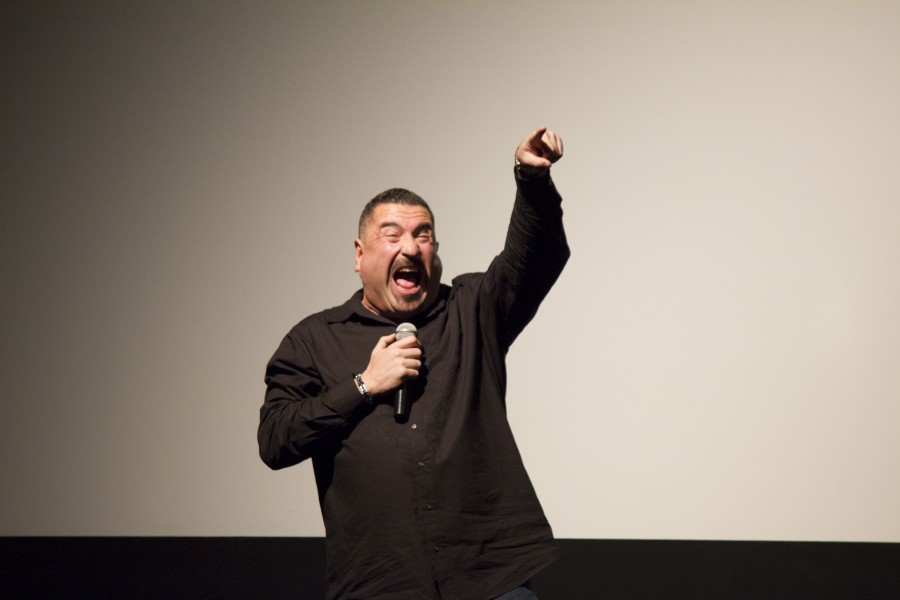 “For those of you who are not Latino, I promise you, you will get something out of my performance,” Ernie G said.

It all started when Ernie G was a young boy growing up in Los Angeles, Calif. He was raised by his single mother, who always made sure her son was going to get a college education. With the help of his high school guidance counselor, Ernie was the first person from his family to go to college.

Following the death of a close friend, Ernie’s grades began to suffer, which led to him being kicked out of college. Once he returned home, his aunt, with whom he shared a special bond with, became ill and died only a few days later. Ernie remembered this time as him “hitting rock bottom.”

At his aunt’s funeral, Ernie decided to speak a few words. His speech touched the hearts of his family and everyone else that had attended.

It was on this day that he realized he wanted to perform in front of people. He promised himself that he would work hard to get back into school and graduate in honor of his aunt.

He went back to community college for a quarter and received straight A’s. When he reapplied for university, he was denied re-entry; however, this did not bring Ernie G down; it only pushed him to try harder.

After four more quarters of hard work and dedication at community college, along with ten referrals, he overcame the odds and got accepted into Loyola Marymount University. Ernie finished strong, ended up on the dean’s list and received his diploma.

Ernie G not only hopes to make his audiences laugh, but he also hopes to inspire them.

“I love entertaining, and I love making people laugh,” Ernie G said, “but inspiring people to realize how beautiful they are is why I do what I do.”

The day before he performed at Central, he walked around campus, handing out flyers to encourage students to come out to the show.

“My favorite part about what I do is watching the students’ eyes water up with tears because they are so touched, moved and inspired,” Ernie G said.

Alyssa Martinez saw Ernie G for the first time, seven years ago, at an empowerment workshop at Washington State University. Martinez has been trying to bring Ernie G to perform at Central for the last four years and finally reached her goal as a senior.

“I remember mostly how his performance made me feel,” Martinez, senior public relations major, said. “He really taps in and brings the leader out in you.”

When Ernie performed at WSU, the students were so empowered by his speech that they actually came up with a scholarship in his name for $300.  Ernie G ended up helping them raise $2000 and gave $1000 to a boy and a girl. The first Ernie G scholarship was awarded to Cindy Guerrero, who is currently a junior at Central.

“We’ve had a lot of inspiration leaders here on campus, but he represents a change,” Martinez said, “Especially for those who might feel like they have no voice on this campus.”

Last Friday evening’s show included some of Ernie G’s new comedic work, which left students and professors in tears from laughter, but most of all, the audience left feeling empowered.

“I really enjoyed Ernie G’s performance,” senior event planning major, Sarah Wood said. “It was a lot different than the past events we have had on campus.”

The performance ended with a powerful message to take away. “If it is to be, it is up to me,” Ernie G said.