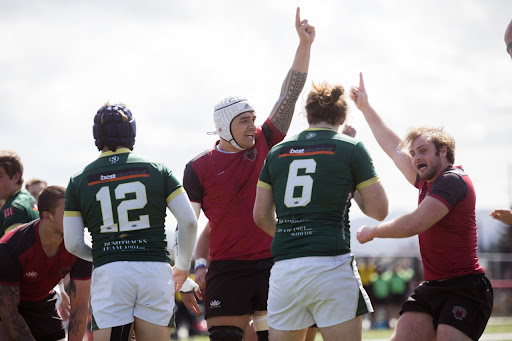 Men’s rugby took care of business in the first round of the 1A championship tournament with a 62-17 win over Cal Poly.

CWU men’s rugby opened the Division 1A championship tournament with a 62-17 win over Cal Poly University (Cal Poly) at Tomlinsion Stadium on Saturday. CWU (7-4) opened the tournament as the number four seed in their first postseason appearance since 2019.

CWU started the game quickly with a try in the fifth minute by freshman Campbell Robb. After a failed conversion kept the game at 5-0, Robb again converted a try in the 12th minute. A successful conversion made it 12-0.

Back-to-back try’s by graduate student Jack Welding and senior captain Albert O’Shannessey expanded the CWU lead to 26-0 in the 26th minute of the game.

After the second half started, CWU came at a flurry with four straight tries by senior Marques Fuala’au, senior John Dupree, freshman Connor Grande and junior Mitchell Hirose to expand the lead to 55-10.

With the win, CWU will travel to take on top-seeded University of California in the semi final next week.