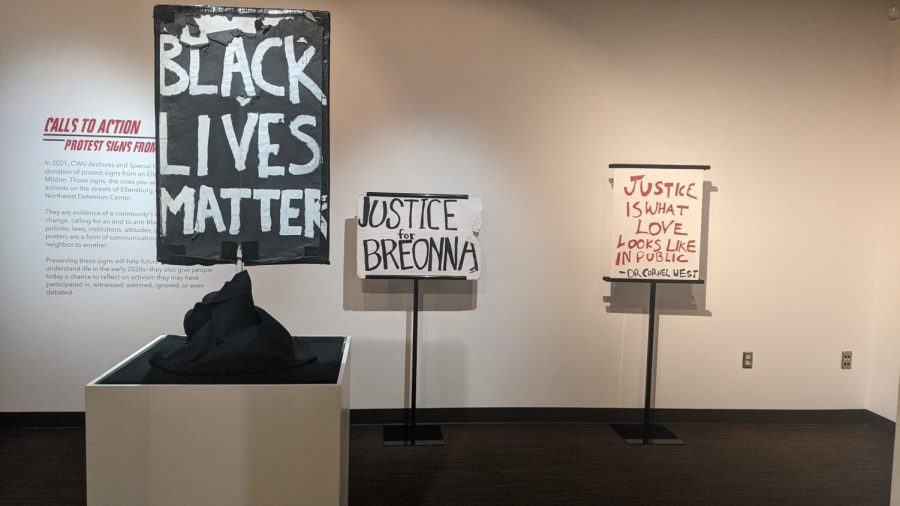 Calls to Action exhibit in the Museum of Culture and Environment

Signs sporting phrases like “Stop funding violence” and “Why is ending racism a debate?” decorate the glaring, white walls of the Museum of Culture and Environment this quarter as part of the Calls to Action exhibit.

The exhibit features protest signs donated by local activist and law and justice lecturer Todd Mildon. The signs have been added to the CWU Archives and Special Collections to forever mark this pivotal era in history.

“Bringing people together is really what my goal is,” Director of the Museum of Culture and Environment Hope Amason said. “There’s a group of really committed people in Ellensburg who are making us aware of injustice … and they are committed also to the call for change.”

The exhibit is “calling for an end to anti-Black and anti-immigrant policies, institutions, attitudes and practices,” according to the display.

Journals and pencils are provided with prompt questions posted above booths cut into the wall, so attendees can share their thoughts about the social justice uprising in recent years.

“People really like the interactivity,” junior in anthropology and front desk staff at the museum Caleb Aal said. “I feel like everyone has been affected by the contents within this exhibit … but you don’t know how they’ve been affected. So the notebooks really add to that ‘how?’”

According to Amason, the museum will feature signs from the Black Lives Matter (BLM) Movement this quarter and next quarter’s display will focus on immigrant rights.

Meaningful moments in the local movement

Many CWU community members participate regularly in activism and feel it’s important to share the message of their past, present and future work on campus.

Mildon and English senior lecturer Ruthi Erdman cited the BLM demonstrations in 2020 as some of the most moving activism they have participated in.

“The very first local BLM march, organized by two EHS girls, was massive,” Erdman said. “It was exhilarating to be marching with so many local families, including a lot of children.”

According to law and justice professor Teresa Divine, students taking abuse for holding Black Lives Matter signs and the solidarity of the Ellensburg community in 2020 were some impactful moments during the recent wave of activism in the community.

“That really moved me,” Divine said. “The fact that the school came out, all the students came out right after George Floyd died.”

Divine said campus police were “incredible” and helpful to her during the marches.

“The teach-in I put on was so grief stricken. It was just so painful, but it was beautiful,” Divine said. “I found out who my true friends were and who were true allies.”

According to Erdman, the resistance to the BLM movement was shocking.

According to Erdman, leaders in the movement were slandered, attacked and given death threats. Despite all the rage and resistance, the community came together to support the movement.

Organizations to look out for

Those interviewed encouraged students to get involved in activism, and they offered some options for participation.

“I’m one of the founders of the Ellensburg Bail Fund,” Divine said. “The Bail Fund came about after the George Floyd teach-ins.”

According to Divine, the Ellensburg Bail Fund is working to get off the ground and hoping to expand. Students can learn more by visiting www.ellensburgbailfund.org  or finding them on Facebook.

“If you find somebody who needs to be bailed out, you can call on the website and we can figure it out and gather the money from other people,” Divine said.

Mildon also volunteers for the Ellensburg Bail Fund and advocates for fair treatment of incarcerated individuals.

“We don’t want to treat people so badly just because they can’t afford bail,” Mildon said.

“I’ve been involved in Central Washington Justice For Our Neighbors which is … a nonprofit, free immigration legal clinic here in Ellensburg,” Mildon said. “Part of our work at CWJFON is to be advocates and activists on behalf of immigrant rights.”

Students can find out more information about CWJFON and get involved by visiting www.CWJFON.com.

Mildon invited students to the CWJFON weekly silent vigil every Wednesday from 5-6 p.m. in front of the courthouse.

“I think we’ve been able to get the word out about the need for immigration reform,” Mildon said. “We’ve been on the street … every single Wednesday from 2018 ‘til last night. As long as it takes to ensure that immigrants have the rights they deserve, we’re going to be getting that message out.”

According to Mildon and Divine, various local activist organizations are planning to collaborate on a Day of Action taking place next year.

According to Divine, it’s important for students to get involved with activism so we can build a society that is fair for everybody.

“Activism should be part of all of our lives if we want to live in a safe, inclusive and equitable world,” Divine said. “The power of the pen, the power of your voice, the power of your passion you can make into activism. It starts here in college, here is where you learn your power.”