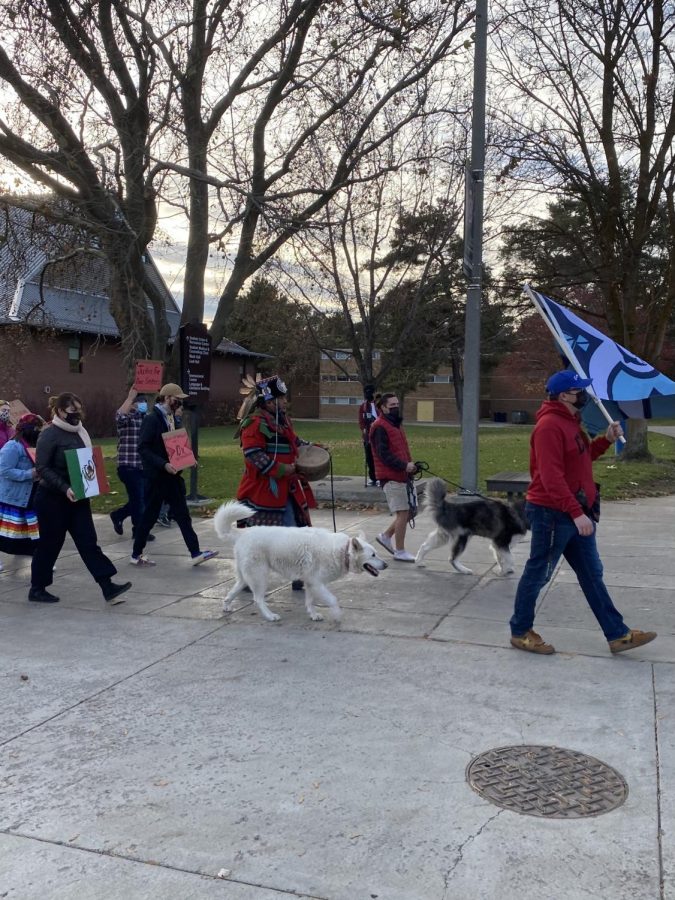 All photos by Katherine Camarata

“Where are our sisters? We pray for you everyday. We miss you. We love you.

Creator, watch over our sisters. Bless their beautiful families. Each day we pray for our missing sisters. Light their way home safely.”

Many Native American and Indigenous attendees donned vibrant regalia and moccasins, and guest speaker Don Nanamkin sported regalia, moccasins and a headdress, singing and using his hand drum as he led the Missing and Murdered Indigenous Women (MMIW) march from the Wildcat Statue to Black Hall on Wednesday. His words and the drumbeat echoed on buildings as the march passed by.

“I come dressed up in regalia here today to show our strong presence as Indigenous people,” Nanamkin said. “We are still here. We stand strong in our culture and traditions.”  Nanamkin is from the Chief Joseph Band of Wallaowa, Nez Perce, and Colville Confederated Tribes, according to Methow Arts. He is a known activist, raising awareness and caring for Indigenous matters, ranging from the MMIW movement and pushing to preserve Indigenous culture and keep it alive.

The Diversity and Equity Center (DEC) hosted this march to shed light on the issue of missing Native American and Indigenous Women.

Around thirty students, faculty and community members of all backgrounds participated in the march to address the lack of representation in the media and overall awareness for missing Native American and Indigenous women versus white women.

Thousands of Native American and Indigenous women go missing every year, and according to a study by the Urban Indian Health Initiative, 95% of these cases were not covered by national or international news media in 2017.

Of 5,712 indigenous women and girls who were reported missing in 2016, only 116 of them were logged in the Department of Justice database according to the Urban Indian Health Initiative.

Attendees held signs that said phrases like “Missing but never forgotten, “Am I next?” and “No more stolen sisters.”

Student Initiative Coordinator Roberto Chavez from the DEC started the march off with a brief speech encouraging attendees to fight for the current generation and future generations.

“We are everything the colonizers feared,” Chavez said. “We are educated now.”

Nanamkin sang and played the hand drum while the march proceeded across campus. Nanamkin said the drumbeat represented a heartbeat.

When the march arrived at Black Hall, everyone gathered in a circle and started to slowly move in a clockwise direction around Nanamkin, known as a “round dance,” as he sang a song that he composed for all missing Native American and Indigenous women while drumming.

Nanamkin encouraged all people present to find the courage to say what needs to be said. He specifically encouraged men to “reclaim their position as warriors” so that collectively they can break the cycles of violence and abuse.

Chavez spoke about his personal experience with this issue and how it motivated him to get involved.

“My aunt and cousin went missing,” Chavez said. “We were lucky to have found my aunt but my cousin so far, no luck.”

Chavez said that even though he is from central Mexican tribes, he feels solidarity with Native American people and wants a connection between tribes on this issue, “regardless of a border.”

Vice President of the Native American Student Union Claire Olney was at the sign-making event prior to the march. Olney said she was motivated to attend because she is part of the Yakama and Snoqualmie Nations and because this issue has been prevalent for years all over the globe.

“I think it’s important that we have this discussion that really needs to be had,” Olney said. “I hope that we are able to make a difference on campus but in the broader community as well, and expand awareness beyond just Ellensburg.”

Chavez said he hoped this march would allow people to be part of something greater than themselves and that it would have lasting effects on the community.

“I … wholeheartedly hope that the march brings awareness to [the] Missing and Murdered Indigenous Women’s movement, and that it’s not a hashtag one moment and never mentioned again,” Chavez said.

Nanamkin said he hoped the march would explain what the display located in front of Black Hall meant to those who may be unaware.

“The solidarity of everyone and their presence brought that to life,” Nanamkin said. “That’s something that will be meaningful and touching to those that saw the gathering, but also those that see the photos and videos [of the march]. They will know what this actually meant.”

Nanamkin said he is grateful for the display of solidarity that occurred and he hopes the march will empower, educate and support students in the missing Native American and Indigenous movement.