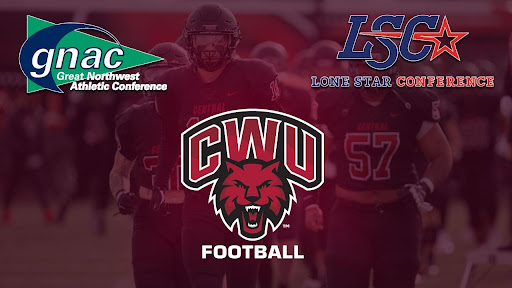 In coordination with the Great Northwest Athletic Conference (GNAC), CWU football will be accepting a multi year affiliate offer with Lone Star Conference (LSC) starting in 2022, according to a press release Wildcatsports.com.

In the release, Director of Athletics Dennis Francois said, “This is truly an exciting day for Central Washington University Football.  Becoming an affiliate member of the Lone Star Conference solves the ever-increasing scheduling challenges on the West Coast and further demonstrates our university’s commitment to providing our football student-athletes the best opportunity to succeed on a national level. I commend Commissioners Haglund and Poerner for their leadership, perseverance, and collaboration in making this union come to fruition.”

With the addition of CWU, WOU and SFU, the LSC will field 10 football teams for the 2022 season. Of the seven teams already in the conference prior to the move, five of them are located in Texas and the other two are based in New Mexico.

Under the affiliate membership, all teams will play a nine game in-conference schedule with two open weeks to schedule non-conference opponents.

The move comes three years after the Lone Star and GNAC conferences formed an alliance in which they agreed to schedule nearly 60 in-region matchups over a four year period.

CWU captured its fourth straight GNAC football championship and has won 11 conference championships since the GNAC was formed back in 2001. The team will play in the first round of the Division II playoffs this Saturday, Nov. 20, at 11 a.m. at Northwest Missouri State.