Wildcats reflect on short season, look to next year 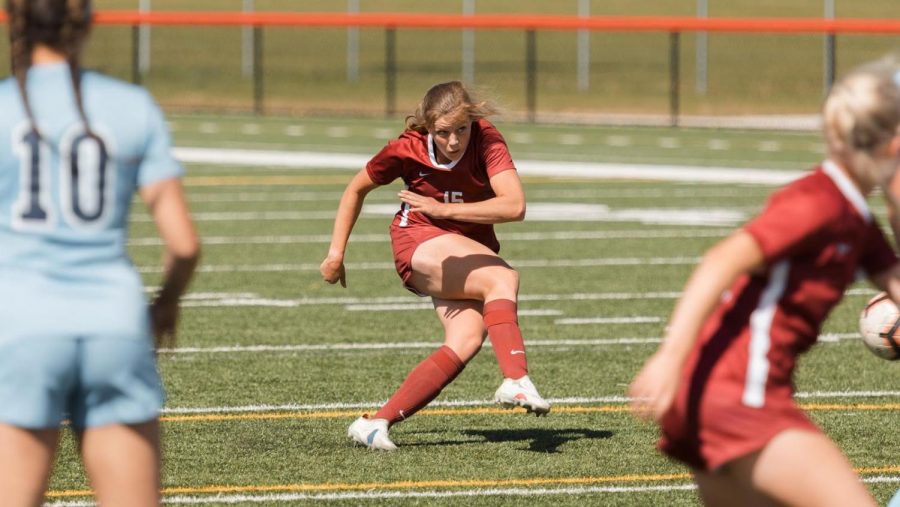 CWU Athletics: Senior Jaymie Woodfill (#15) scored the only goal for the Wildcats as they fell to WWU 3-1 to end their season with a 2-3 record.

After winning their first two games of the season the soccer team ended the season with a 2-3 record. While the season may have been cut short, the team is looking towards next year when it looks like there might be a full season to show what they can do.

The women’s soccer team ended their quick five game season with a 3-1 loss at the hands of the Western Washington University Vikings on May 22. Senior forward Jayme Woodfill scored the lone goal with 2:17 remaining in the second half.

Sophomore forward Peyton Vogel said the short season was difficult when it came to bonding the team together.

“This short season honestly has been really rough because you only know your team so well,” Vogel said. “And how the short season is only six games, it’s really hard to connect and play together compared to when you have an entire season of 20 games.”

Senior midfielder Sophia Keenan echoed the notion of how team bonding was difficult in such a short season.

“It was difficult, but we took some time at practice and did some team bonding activities,” Keenan said. “We did this thing called highs and lows before and after practice to just kind of go over things that were going on in our life that were good and bad just to make sure we are keeping in touch with what we are doing outside of soccer. So that was to try and build those relationships besides being teammates.”

Vogel said that during a regular season the team would try to have a bonding event once every quarter. However, this year they upped the amount of bonding events to three per quarter to try and make up for loss time.

Vogel also said that a combination of some of the freshmen already stepping out of their comfort zone and upperclassmen showing them the ropes led to them feeling more comfortable at CWU.

“The freshmen were already out of their box which was kinda cool,” Vogel said. “A lot of sophomores took them under their wing to show them the ropes of CWU. It was really hard for them because they’re not on campus meeting more people so I think us as a team being their only outlet of meeting people is important.”

Keenan said while she was impressed by the leadership on the team due to making through the shortened year, she admits there is still some growing to do because of the inexperience that the team will have next year.

“It says a lot and I think we have a lot of growing to do leadership wise because we are such a young team,” Keenan said. “There’s definitely going to be a lot of big roles for freshmen and sophomores to step into in the fall and I think it will be very telling as we get there.”

Keenan said the excitement of just being able to play soccer after over a year off was the thing that motivated the team the most.

“How we kept each other motivated was preparing ourselves for the fall, ” Kennan said. “It’s been such a weird year but everyone is excited since it’s been a year and a half since all of us had touched a ball and played a game. I think the excitement of just playing and being there with each other and being as a team was what really carried us throughout this spring and just being motivated and committed together as a team.”

Keenan said that what motivates her as she approaches her final year of eligibility at CWU is she wants to end her collegiate career strong.

“I just want to end my career at CWU as a soccer player on a very high note,” Keenan said. “Me and the rest of my class have worked so hard to get to this point and it was heartbreaking hearing the news about COVID taking our senior season and besides being upset it kind of ignited a fire out of me and I said I don’t want to go out this way.”