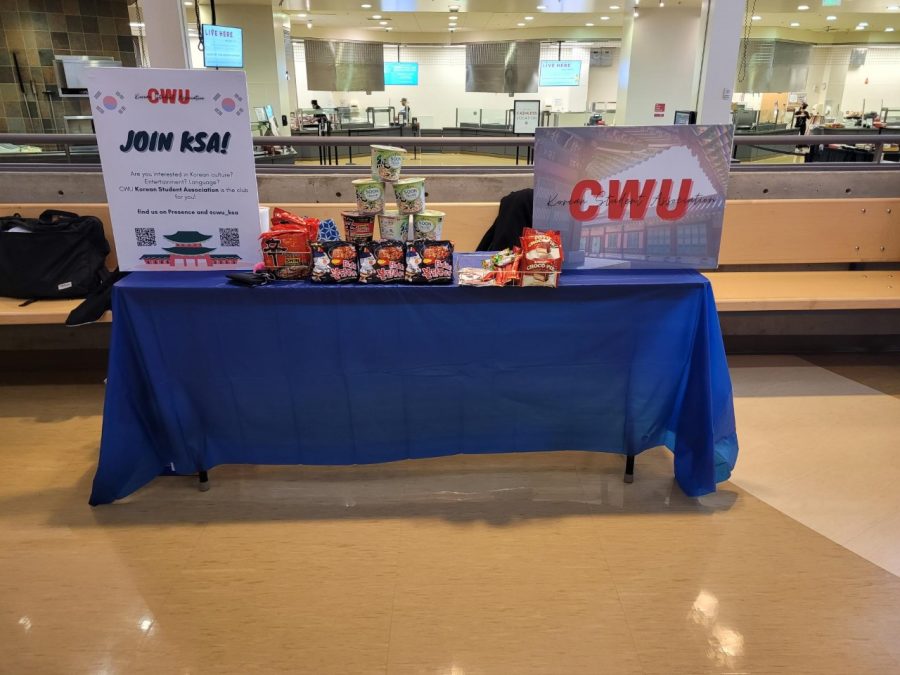 There’s only one week left in the quarter and what better way to celebrate than with student appreciation week. Monday Movie Madness, Student Club Fest, Headphone Disco and many other events took place May 24-28 to appreciate students.

“Typically, campus activities would just have one day and call it student appreciation but this year with the COVID protocall, we decided to spread it out into a whole week to allow more activities for students to participate in,” said Avery Cortinas, special events coordinator of CWU campus activities.

All of these events were held in person, although students were expected to keep their distance and wear face masks.

Starting the week off was the showing of “Wonder Woman 1984” at Monday Movie Madness. Junior Public Health major with a specialization in population health Makenna Theringer said she attended the event because it is a good movie and gives her an opportunity to meet up with friends.

“Both the drive-in ones they had we’ve gone to because I have a truck and we sit in the back of it and so that’s fun but they had to move it inside because of the wind,” Theringer said.

After seeing them play “Wonder Woman 1984,” Theringer said she would like to see more of the superhero movies, such as Marvel and more DC Universe, and newer movies in general.

Special Events Coordinator for Campus Activities Katie Doonan said in previous years, Campus Activities chose what movie to play based on what is doing well in theaters and ones that are family friendly. This year, they looked at popular movies on Disney+ and Netflix. Doonan said they are always open to suggestions from students.

Over 20 students came to Club Fest on May 25 to check out the clubs on campus. Freshman Anthropology major Rachel Pfander said she heard about the event through all the advertising on campus and has been looking for ways to get involved on campus, as well as meet new people.

“I am excited to hang out and to do some activities as well as learn a little bit more about what we have here,” Pfander said.

Pfander didn’t have a specific club she was looking to join, but she ended up joining the cosplay club.

Freshman Psychology major Kendall Johnson said she found out about club fest, after reading the “what’s going on this week” flyers in the SURC. Johnson was also looking to make new friends and get involved on campus.

“The event was fun!” Johnson said. “Everyone I spoke to was really nice and they made me feel very welcomed.”

Johnson also wasn’t looking for a specific club to join, she said she wanted to see what clubs CWU has to offer.

Special Events Coordinator for Campus Activities Avery Cortinas said the goal of this event is to have as many clubs as possible to participate and get students excited and involved for the upcoming school year.

“So we just wanted to get students excited about the opportunities they’re going to have moving forward and kind of let them know that there are so many different opportunities for them to express their interest,” Cortinas said.

If students were unable to attend the event, there is still a way for them to get involved. The Inter Club Association page on CWU’s website, https://www.cwu.edu/clubs/, all the information about the clubs and when they meet will be on there, as well as on the individual clubs’ social media pages.

Wildcats gathered outside the SURC Wednesday afternoon for the Equity and Services Counsel (ESC) Block Party. The east patio was lined with tables representing each organization that makes up the ESC.

“[The ESC] is composed of [nine] traditionally marginalized communities of students,” said Gared Contawe, member of the Filipino American Student Association (FASA), one of the represented communities within ESC.

The event helped bridge the gap between each organization of ESC and other CWU students. Each booth provided information on the individual clubs, links to social media, fliers of information and free goodies.

Students in attendance were given a slip of paper at the entrance of the event. The goal was to have each booth sign the slip of paper to prove you talked to each organization. In return, students were given a free t-shirt in exchange for the completed paper.

“The biggest take away from this is that it’s an event for students to come and connect with other students to find out what is happening on campus through other groups and honestly, just have a good time,” Contawe said.

The east patio was yet again filled with students as Campus Activities hosted a BBQ and Concert event. “Yeah it is a really cool event and we love doing events out on the east patio. It is really just a neat place,” said Joe Ritchie, executive chef of dining services.

Ritchie helped put together the menu that consisted of several options for students to choose from. These include mini burgers, mini veggie burgers, pork quesadillas, veggie quesadillas, and veggie wraps with green goddess dressing.

The quesadillas were cooked out of “the wagon.” The dining services’ wagon has been parked for over a year now and Ritchie said he was excited to see it up and running again. He hopes to use the wagon much more now that the COVID-19 restrictions are loosening up.

Along with food, there were plenty of drink options as well. The Coke truck made an appearance to hand out drinks to students as well as an italian soda bar that came with a free cup for students to take home with them.

The concert portion of the event was held in the ballroom of the SURC. Students could grab their drink and dinner of choice and make their way inside to watch the performances.

Student artists performed all evening as students came in and out of the ballroom. Many students attended the concert in the ballroom for entertainment as they ate their barbeque dinner.

The Wildcats broke out their dancing shoes late Thursday night at the Headphone Disco. More than 20 students attended the mass jam session.

“I got to experience [a headphone disco] at one of our conferences we go to and it’s really fun. Everyone gets to listen to whatever station they choose,” Cortinas said.

At the entrance of the event, each student was given their own set of headphones. These headphones had two buttons, one to control the volume and another to control the station they listened to.

Each station, DJed by 88.1 the Burg, had a specific color that lit up the headphones. This way, other people can tell what station others are listening to.

The ballroom was dark and had neon lights illuminating the room. The stage was occupied by a DJ that ran one of the stations available for students to listen to.

Toward the back of the room was a table for the sound crew and a series of extra tables and chairs for students to take a break in between dancing their hearts out.

“I think for students that are graduating and not coming back next year this is kind of a last hoorah for them,” Doonan said. “They really did not get to experience a lot of things in the last year and a half or so. I think it is nice to do something in person for them and celebrate the things they have accomplished throughout this last school year.”