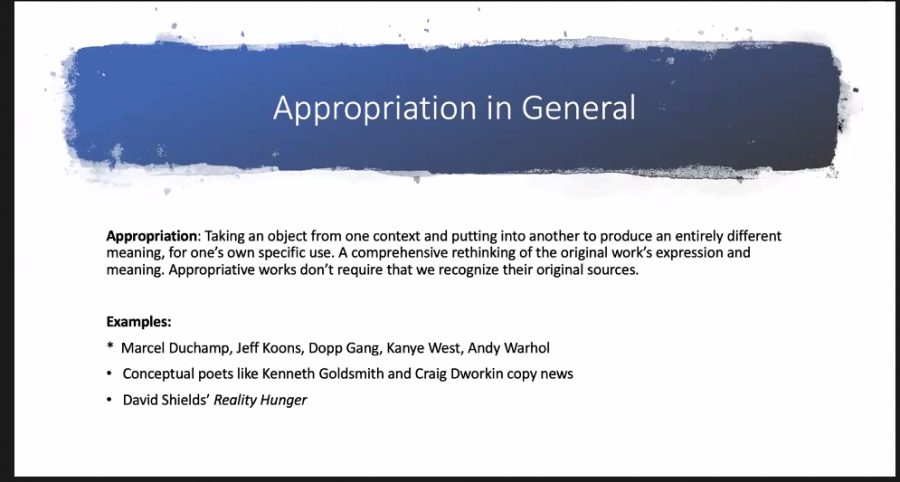 The rising issue of cultural appropriation was discussed over a Zoom webinar by author Paisley Rekdal. Rekdal was invited to speak by the English department in their Lion Rock Visiting Writers Series. During her craft talk, Rekdal presented a slideshow on cultural appropriation in literature and spoke on how aspiring writers should navigate this issue.

Rekdal is a professor at the University of Utah. An award-winning memoirist and poet, Rekdal was named Utah’s Poet Laureate in 2017. Rekdal is the author of the book “The Night My Mother Met Bruce Lee.” Rekdal’s most recent book, “Appropriate: A Provocation,” which came out February 2021 discusses cultural appropriation in literature.

Rekdal began her discussion by saying, “All of us are appropriating all the time, whether we think we are or not.” Rekdal then discussed the definition of appropriation and gave examples of works and writers that appropriated cultures. Such examples included pop artist Andy Warhol, musician Kanye West and poet Kenneth Goldsmith.

Rekdal analyzed works that had issues with cultural appropriation. The poem “How-To,” which had made its round recently in social media and divided people on whether or not it was acceptable was mentioned. According to Rekdal, the poem sends out the message “You’ll be successful in the streets if you can mirror back what the perceiver sees.” The author Andy Carlson, a middle-class white man, was accused of having no right to write this poem as he had no experience with the streets. The main dispute of the poem was who the speaker is.

Another work discussed was the novel “American Dirt” by author Jeanine Cummins. The book follows a migrant mother and son as they try to make it to the U.S. Rekdal noted that Cummins tried to make the book accurate but still ended up with lots of inaccuracies. Rekdal warned against creating characters into statistics by putting them through “too much” like in Cummins’ novel. Rekdal touched briefly on Cummins’ advantage over Latino writers.

Rekdal answered questions from the audience at the end of the webinar. Attendees asked questions such as, what steps can white writers take to continue to make space for Black, Indigenous and people of color writers, and advice for Professional and Creative Writing major students to get their work published.

Rekdal ended the talk by speaking on the term “stay in your lane.”

Students who would like to watch a recording of the craft talk can contact Maya Zeller for a copy of the recording.