The Rise of Phoenix: Why the Suns deserve to be in the Playoffs 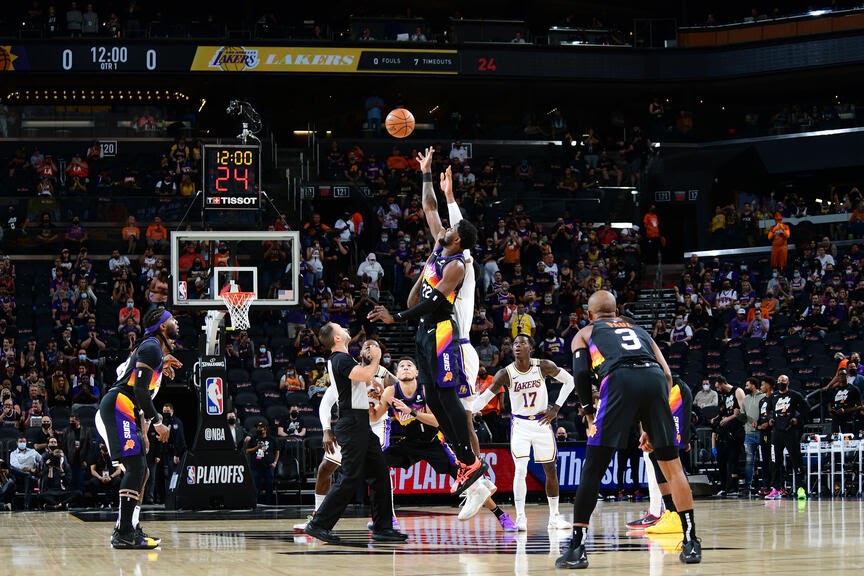 PHOENIX, AZ - MAY 23: Deandre Ayton #22 of the Phoenix Suns jumps for the tip against the Los Angeles Lakers during Round 1, Game 1 of the 2021 NBA Playoffs on May 23, 2021 at Phoenix Suns Arena in Phoenix, Arizona. NOTE TO USER: User expressly acknowledges and agrees that, by downloading and or using this photograph, user is consenting to the terms and conditions of the Getty Images License Agreement. Mandatory Copyright Notice: Copyright 2021 NBAE (Photo by Michael Gonzales/NBAE via Getty Images)

The Phoenix Suns make a postseason appearance in the playoffs after 11 years. The last time they made it to the playoffs was in 2010 only to lose to the Los Angeles Lakers in game 6. Since then, the team has gone through many changes and challenges but they have risen like a phoenix from the ashes better and stronger than ever.

None of the teams currently in the playoffs have waited this long to play for a chance at the championship. No matter the outcome, it will go down in history for both the organization and fans. There are four reasons why the Suns deserve to be in the playoffs.

Despite their shortcomings in previous seasons, The Suns remained optimistic and determined to get to where they are today. The Suns hit rock bottom during their 2018-19 season ending with 19-63, their second worst since their debut in 1969. In the infamous bubble the Suns had a perfect record of 8-0 but were shy from the playoffs due to other games.

The thing is, once you reach the bottom the only other way to go is up and that’s exactly what they did. In the span of two years they’ve gone up the ranks from being last in their conference to the number two seeding in the west at the end of their regular season.

In 2019, former NBA player and coach Monty Williams was signed to the Suns on a five year deal. It couldn’t have been better timing as the Suns were at their lowest point. In his first season the Suns improved by 15 games finishing the 2019-2020 season with 34-39. Things really took off in his second year with the Suns as he took them from being in the bottom to the top improving by 17 games from the previous season finishing strong with 51-21 making it the second best record in the NBA and into the playoffs.

The Suns offense and defense rankings have also improved under Williams’s leadership standing at 6th and 7th in the league. Williams has completely turned over the dynamic and culture of the team. He has also raised his expectations for the team and pushes and motivates them to be the best they can be.

The Suns currently have one of the youngest rosters in the NBA. They have proven that age is just a number as they continue to make up for lost time.

The Suns have a number of young talented rising stars like Devin Booker and No. 1 pick of 2018 Deandre Ayton. This pair broke records in their postseason debut, Booker with 34 points and Ayton with 21 points and 16 rebounds. Other notable players include Cameron Payne, Mikal Bridges and Jae Crowder who was in the finals last year with the Miami Heat.

Point guard Chris Paul and forward Abdel Nader were traded from the Oklahoma City Thunder to the Suns in November of 2020 in exchange OKC got Kelly Oubre Jr., Ricky Rubio, Ty Jerome and Jalen Lecque.

Williams and Paul were reunited once again after working together in the past in New Orleans where Williams coached him for one season in 2010-2011. Paul is considered one of the best perimeter defenders in the NBA. He quickly rose as a leader on the team and is respected amongst his teammates. Paul has definitely helped turn the franchise around.

He has also been in the playoffs for the past 10 years in a row making him the most experienced on the team.

The Suns will continue to play the Lakers in the series as they fight for a spot in the finals.