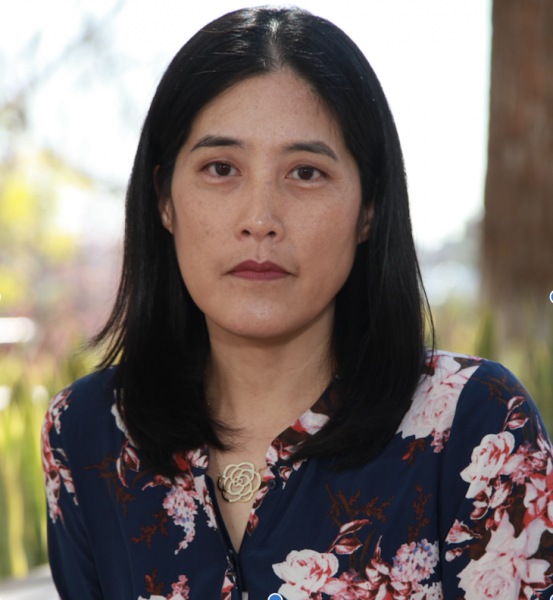 “Victoria Chang is known for her sharp wit and her ability to weave humor with grief, social commentary with literary allusion and lineage,” Maya Zeller said.

Chang’s writing varies across genres, with topics of race, class, grief and humor. Chang’s most recent titles are “OBIT,” and “Love, Love.” According to Wiki “OBIT” was a finalist for the National Book Critics Circle Award, the PEN Voeckler Award and long listed for the National Book Award.

“Love, Love” has received critical praise, and is popular with younger readers and adults alike. Recipient of numerous awards and fellowships, Victoria Chang was born in Detroit, Michigan and raised in the suburb of West Bloomfield. Her parents were immigrants from Taiwan. Chang graduated from the University of Michigan with a BA in Asian Studies, Harvard University with an MA in Asian Studies and Stanford Business School with an MBA.

During the May 4 virtual reading, Chang read from her novels “OBIT” and “Love, Love.”

In “OBIT,” Chang extracted her grief during a feverish two weeks by writing several poetic obituaries for all the things she lost in the world.

“Love, Love” is a novel about a young Chinese American girl dealing with school bullies, trying to find the mystery of her sister’s strange illness and strength and validity at the local tennis court.

Gabby Trianna is a senior at CWU majoring in English Language and Literature, with a minor in Creative Writing and an intern at the Lion Rock Visiting Writer Series center.

Trianna was able to open for Chang by reading two of her own pieces, “Visiting Soldotna, Alaska,”a poem about the town she grew up in, and “Sestina for Dead Words,” a poem about language.

Trianna wanted to read these pieces of her own because of the connection she felt between her writing and Chang’s, “Both in terms of aesthetic and subject matter with the visiting author,” Trianna said.

On May 5 Chang delivered a craft talk where she discussed the decisions she made with form, genre and other literary moves, as well as how to write about difficult topics like grief and timely discourse around immigrant identity.

“I just think the series is a really great chance for anyone to have opportunities to connect and work with professional authors that do what we want to do,” Trianna said.