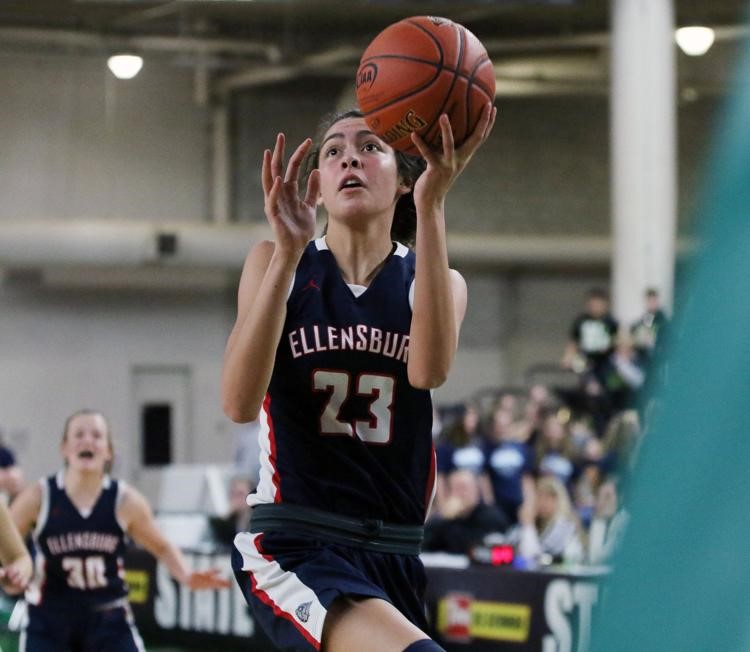 Ellensburg High School sophomore Olivia Anderson has risen as a top prospect in the country. She has received 23 college letters.

The Olympic stage is where a nation’s best athletes compete for the world to see. For those fortunate enough to play on this stage, their world changes.

One person that has started down this path is an Ellensburg local named Olivia Anderson.

The sophomore power forward for the Ellensburg High School girls basketball team was recently invited to the 2021 USA u16 National Team trials in June.

“I have always admired the women who have played on these Olympic teams,” Anderson said.

Anderson said she was surprised, but ultimately thankful for her invitation. At the trials, she gets the chance to play with, and against, some of the best in the country in her age group.

“At the trials, I’m expecting a lot of drills and playing, but there will also be a lot of mental work,” Anderson said.

According to Anderson, the Princeton head coach was once the coach for this same team and the two talked about the trials while Olivia was on a visit.

“I am now pushing myself much harder because I know that there is going to be great competition,” Anderson said. “I usually try to push myself at 100% all the time, but this gives me something greater to look forward to.”

Anderson is no rookie when it comes to stressful environments.

“I am currently playing with FBC Northwest Alliance,” Anderson said. “We have a tournament in Charlotte that starts tomorrow.”

According to Anderson, her parents and family are one of the reasons she has had so much success with basketball, saying they push her everyday to be the best version of herself.

Her father, Jason Anderson, said, “we are super proud and excited for her to have this opportunity.”

According to Jason Anderson, he and Olivia’s other parents have supported her journey wholeheartedly and have done their best to open as many doors for her as possible.

“We let her take on as much as she wants and thinks she can handle,” Jason Anderson said. “She understands how serious the trials are going to be.”

According to Jason Anderson, if Olivia makes the team, she will potentially be away from home for a month until the FIBA Americas u16 Championship in Chile is completed.

“Olivia is used to traveling so she should be fine,” Jason Anderson said. “And a lot of facetime calls with the family will bring some reassurance to her while she is gone.”

According to Jason Anderson, Olivia has been working extremely hard to come into the trials at her best condition.

“Usually, her performance would be peaking because of the high school season,” Jason Anderson said, “but with the way this year has been, she has had to expedite this process on her own.”

One person who is helping Olivia during this training process is the head coach of the Ellensburg High School girls basketball team, Jeff Whitney.

“I was really happy for her, because not many players get this opportunity,” Whitney said. “Only 30 people in her age group.”

According to Whitney, his first thought after hearing the news was to help her in any way possible, so that she would have the best chance to succeed.

Whitney said that they have been working on all her fundamentals before she leaves.

“She is highly athletic, and for someone of her size she shoots extremely well,” Whitney said. “She plays in the post, but has the skill set to be out on the perimeter.”

As a power forward, the post is where Olivia will be doing most of her battles. According to Whitney, Olivia does very well in the post, so her main area to improve on is her physical strength.

“When you are down in the post, strength is very important,” Whitney said. “I think with her, as she continues to develop, she is going to gain the strength needed to fill her role.”

An opportunity like the one presented before Olivia Anderson doesn’t come around very often. But Jason Anderson said, “there is no way to fail in this. Going in as one of the 30 kids and working so hard to get this opportunity, this is a success no matter what the outcome is.”