Vaccine requirement for students under discussion 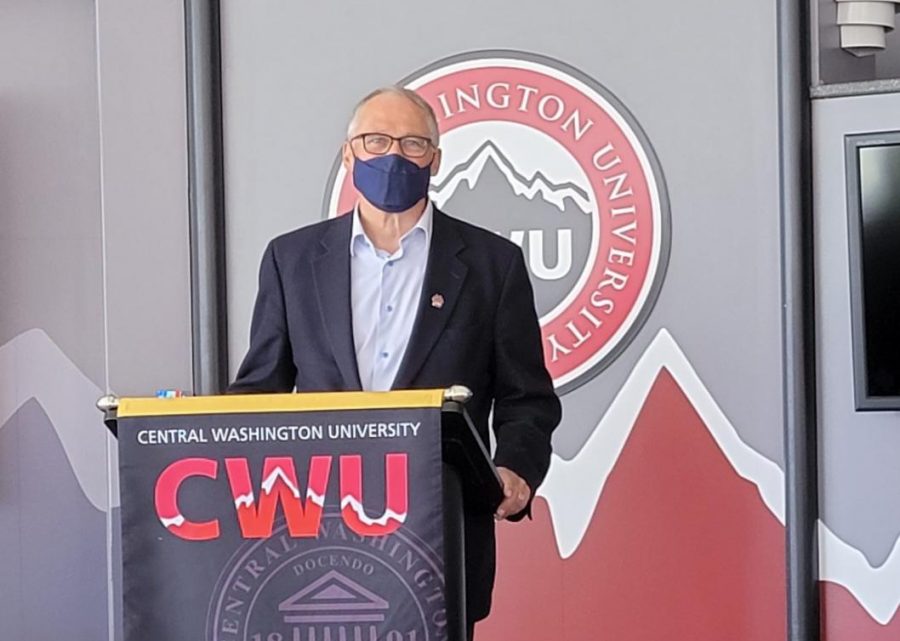 While Washington’s public universities are currently set to decide, Gov. Jay Inslee said a state vaccination requirement for students to attend classes on college campuses in the fall is “under consideration.”

Inslee made the comments during a visit to campus on April 27, where he toured the vaccine clinic in the SURC. Inslee was joined by several other local officials, including President James L. Gaudino and Ellensburg Mayor Bruce Tabb.

Inslee said right now, the state is “looking at some of the legal options we have” to mandate the COVID-19 vaccine for college students statewide, though it is currently under the “individual jurisdiction” of universities.

This comes after several public and private universities have announced that students will be required to get vaccinated.

Last week both the California State University and University of California college systems, which have over one million students combined, announced they would require vaccines for students returning in the fall.

“I was just talking to the [university] presidents about this,” Inslee said. “What I can say is it’s extremely important to have a high rate of vaccination.”

While stressing vaccine importance, Inslee pointed out college students make up about half of Ellensburg.

Inslee said there’s been some “irresponsible behavior” in Pullman with Washington State University students, which resulted in an increase in cases. Whitman county, where WSU’s campus is located, moved back to phase 2 of the reopening plan on April 16 due to that increase in.

“That affects the whole community there,” Inslee said.

Gaudino said if it were up to him, he would require a COVID-19 vaccine for students in the fall, and his vaccine plan will recommend the university do so. However, the decision will be made by incoming President A. James Wohlpart, who will officially take over for Gaudino on June 7.

CWU is currently discussing how they would implement a mandate, and Gaudino said that enforcement “is the big issue.”

“That’s a legal question more than it is a policy question,” Gaudino said. “If I could do it, I would absolutely do it.”

One option is an attestation, where students would submit a form saying they’ve been vaccinated.

“If 80, 85 percent of us get vaccinated, Central will look the same next year as it did before the pandemic,” Gaudino said. “If it’s less than that, we’re going to have to have restrictions, some restrictions.”

Gaudino said the number of restrictions on campus would depend on the infection rate in the fall.

“Right now, we’re on a trajectory to open more or less normally,” Gaudino said. “I’m expecting that the vaccination rate will not be sufficient that we don’t have to wear [masks] all the time, while we’re out and about, and in our classes.”

Inslee repeatedly said how important it is to get vaccinated, and said the state has “a very intensive public campaign going on” to increase vaccination rates.

Some of the incentives Inslee cited include relaxing COVID-19 restrictions that are in place.

“If that’s the route we have to look down, we need to consider these issues,” Inslee said. “Now, we’re not waiting for that.”

Beyond the public information campaign, Inslee said the state is engaging with medical experts to encourage the vaccine.

“We know that the most credible messengers on this are the nurses and the physicians and dentists and physical therapists,” Inslee said. “We have found this is the most persuasive way.”

During his visit, Inslee was complimentary of the vaccine clinic on campus, and how easy it is for students to get vaccinated. Inslee cited the clinic’s location on campus, and said it was “very well accepted by students.”

“The kind of operation here at Central, to allow them to have it right on campus is fantastic,” Inslee said. “We want all colleges to follow the leadership going on here.”

Inslee said part of the state’s strategy for increasing vaccination rates is stressing how easy it is for people to get vaccinated.