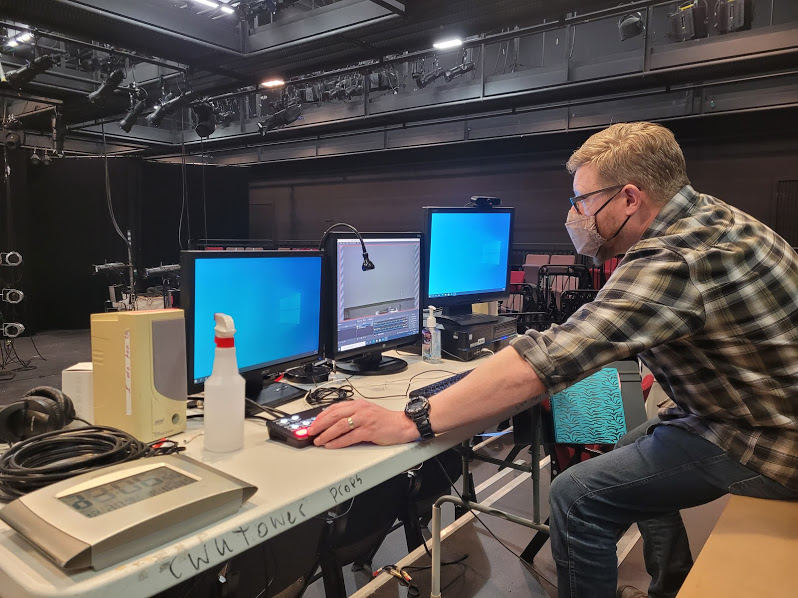 The theatre department’s fifth annual Short Works Festival went online this year, a decision made after the overall available time for those involved to work on the project in-person shrunk down.

Kathryn Stahl, faculty mentor for the Short Works Festival, said, “We planned for this to be in person, however, with the requirement to have the first two weeks online … and some miscommunications in CWU’s [COVID-19] testing release back-to-classes date we made the decision that with only a week and a half until tech it would be easier, it would be much more safe, to move it online with so many unknowns about student test results.”

Students make up the majority of the project’s talent and team.

“So, the Short Works Festival is a series of student-written, student-acted, student directed plays that is produced at [CWU],” Stahl said.

Michael Galvin, a theatre major, acted in two of the show’s pieces. He said acting at one camera is different from acting outwards at an audience.

Open Broadcaster Software (OBS), a program used for streaming and recording, played a big part in this year’s production.

Stahl said, “One of our alum from here, Megan Hicks, had directed a show using OBS and had incorporated scenic elements through background pictures … so I had seen her production and said, ‘Oh my gosh, we could totally do that with Short Works.’”

The production used backgrounds behind the characters to establish things that would normally be established on stage in other ways. Stahl said a rainbow backdrop was used to show when a scene moved out of reality, something that traditionally may have been shown with different lighting on stage.

“We have been on a journey of self-study of OBS,” Dougherty said.

Dougherty said the theatre department did a production last spring entirely online through Zoom. He also said there is a need for more control over what the audience saw, and new ways to tell the story through OBS made it an important tool in the process of the Short Works Festival.

“We’ve tried to maintain some of the process that goes with a traditional stage show,” Dougherty said.

The show used YouTube to livestream to the audience, which changed the way the audience could interact with the show.

“We had totally forgotten about audience feedback and interaction during the show … and then people started chatting and reacting to the stories, and that’s an element we don’t usually get,” Dougherty said.

The Short Works Festival allows students outside of the theatre department to put their works into the world.

“I think the Short Works [Festival]  is a good way for not only theatre students to get involved with theatre, but anyone across campus. If they have an idea of a play or even want to try acting there’s a little less stakes in short works,” Galvin said.

This year’s festival had stories involving imaginary friends, a monologue from the perspective of a hash brown, and a piece that highlighted the loneliness that some have experienced in the last year.

“The Short Works Festival provides an excellent viewport into the things that our students are currently thinking about,” Dougherty said.