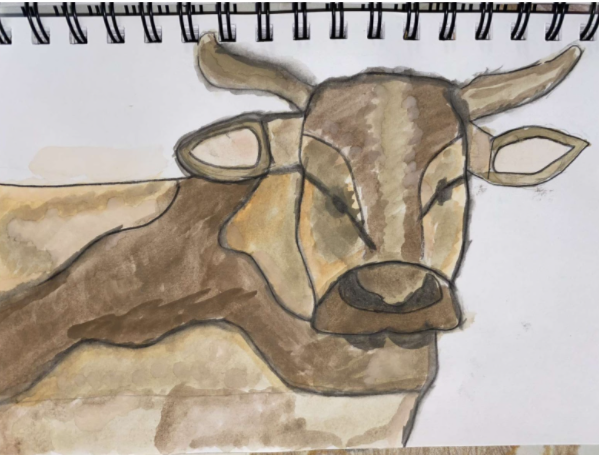 A mixed media portrait done by Bianca Sanchez in an attempt to maintain her mental health.

Being alone in a house when going outside and seeing friends is not allowed can be rough for some people. However, just because students are stuck at home doesn’t mean they can’t get anything done.

Nathan Sauther, a sophomore music education major, said quarantine allowed him to focus a lot more on studies and his passion for jazz music.

“I got a bunch of stuff out of the way for my school work that I wouldn’t have been able to otherwise,” Sauther said. “Now that I can go back into the music building I can work on other stuff.”

Sauther, who has been playing both piano and drums since he was little, said he wanted to understand different harmonies when it came to jazz. He also said he really wanted to play an instrument that had notes, and piano was something he initially played infrequently, but he has become more of a serious player during quarantine.

Christian Wilson, a junior psychology major, also had some accomplishments during quarantine he was very proud of.

“I started to read more,” Wilson said. “I read about six books during quarantine.”

Wilson, who admitted that he despised reading as a kid, said the reason he got into reading was that one of his friends gave him the book “Dear Evan Hansen” right before quarantine, and he really enjoyed it.

“I really loved the musical ‘Dear Evan Hansen’ and I kind of fell in love with the fact that I could picture the scenes in my head,” Wilson said. “From there I wondered, ‘what other fun books could I read?’ So I read some of the other books that we happened to have on the shelf in our house.”

Wilson said he enjoyed reading during quarantine so much, he is still reading books today.

Bianca Sanchez, a junior double majoring in psychology and public health, picked up a skill in which she already had a little practice in.

“I picked up art,” Sanchez said. “I used to just color as a form of art therapy to maintain my mental health. But during quarantine my mental health got a little worse so I kind of amped up my art abilities.”

She said instead of just coloring she would paint and draw cartoons to help her mental health improve during all the time spent inside.

“Coloring wasn’t doing it for me anymore,” Sanchez said. “I wanted to have an outlet to release my stress and put all my frustrations down.”