Organizers raise over $5,000 for Ellensburg BLM mural in one day 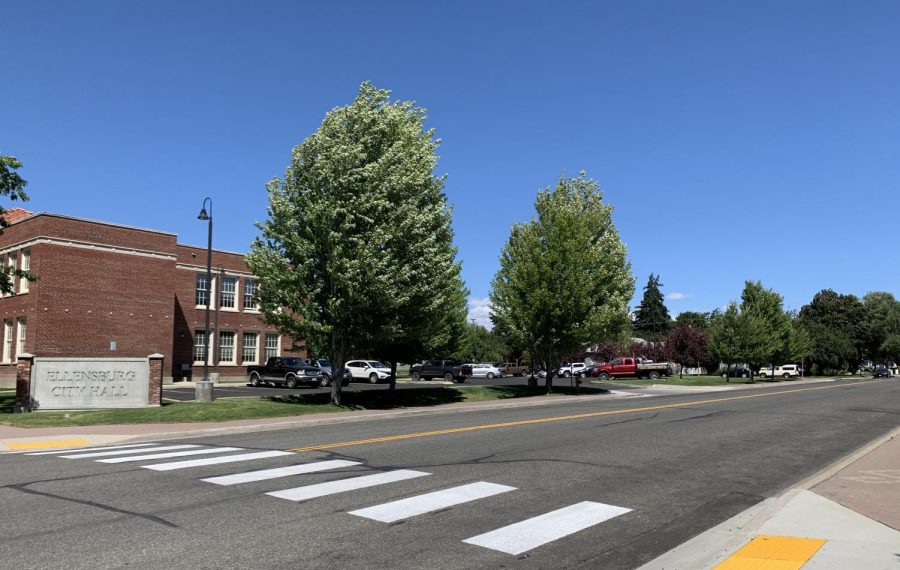 The street outside of Ellensburg City Hall where organizers plan to paint a Black Lives Matter mural.

A GoFundMe fundraiser to paint a Black Lives Matter (BLM) street mural in Ellensburg has raised over $6,000 in donations so far, including a $500 donation from ASCWU.

The mural is planned for downtown Ellensburg near city hall and Safeway. Similar murals have been painted in several cities across the country.

Tre Gardner, a CWU alumnus who has helped lead Black Lives Matter protests in Ellensburg for nearly two months, has worked to organize the mural with Ellensburg Call To Action. Gardner said the fundraiser to pay for the mural went better than he hoped.

“We called on the community to help and to support, and they stepped up 10 times more than I even was expecting,” Gardner said. “There’s a lot more support for this project than there is objection.”

The GoFundMe page was organized after some residents objected to city council members who suggested that taxpayer funds be used for the project.

While Gardner hoped the page would reach its target of $5,000 within a week, it met that mark within 10 hours of opening on Wednesday, July 15. While there has been opposition to the project, Gardner said the fundraiser shows the community, as a whole, backs the project.

“I think it’s tremendous what that GoFundMe was able to show in terms of symbolism,” Gardner said. “If that doesn’t show that we have support, then I don’t know what does.”

Gardner says whether people are for the mural or against it, the mural will start a dialogue among community members.

“As long as we can get people out, both positive and negative, that means we have the attention of them and we can actually start the conversation at that point,” Gardner said.

ASCWU President Mickael Candelaria announced Wednesday that ASCWU voted unanimously to donate $500 towards the mural. Candelaria stressed this money did not come from the Students and Activities budget, but rather the ASCWU foundation account. This account is funded through donations from alumni and local businesses.

Candelaria said the mural is “110% vital” to Ellensburg since CWU has a high level of diversity.

“Our black community here at Central has historically not been as welcomed as other students,” Candelaria said.

Candelaria thinks this mural is a step towards making CWU more open to everyone.

Gardner said he was appreciative of ASCWU’s donation and that it shows they want to continue the dialogue around Black Lives Matter.

“I feel like it’s very important for ASCWU to be involved in situations like this,” Gardner said.

Since Ellensburg is largely made up of college students, Gardner said it is important for CWU and ASCWU to “be involved in the community, trying to engage in dialogue and discourse and community action.”

While the mural met the fundraising goal, Gardner said there are more steps to take before the mural is painted. In a conference call on Thursday, July 16, Ellensburg Mayor Bruce Tabb told organizers that several city council members are reconsidering their support of the project. Tabb also told organizers the city council will need to outline rules on who could paint a street mural.

According to Gardner, organizers are still trying to determine which city council members are reconsidering their support and why. Gardner also said Tabb has been supportive of the project throughout the process, including during the call on Thursday. The Ellensburg City Council will hold a Zoom call on Monday, July 20, with organizers to talk about what to do next.

Gardner said the tentative plan is for the Ellensburg City Council to pass an ordinance outlining rules around street murals on August 20, and the mural will be painted in early September.

Tabb did not respond to an email requesting comment on the planned mural.