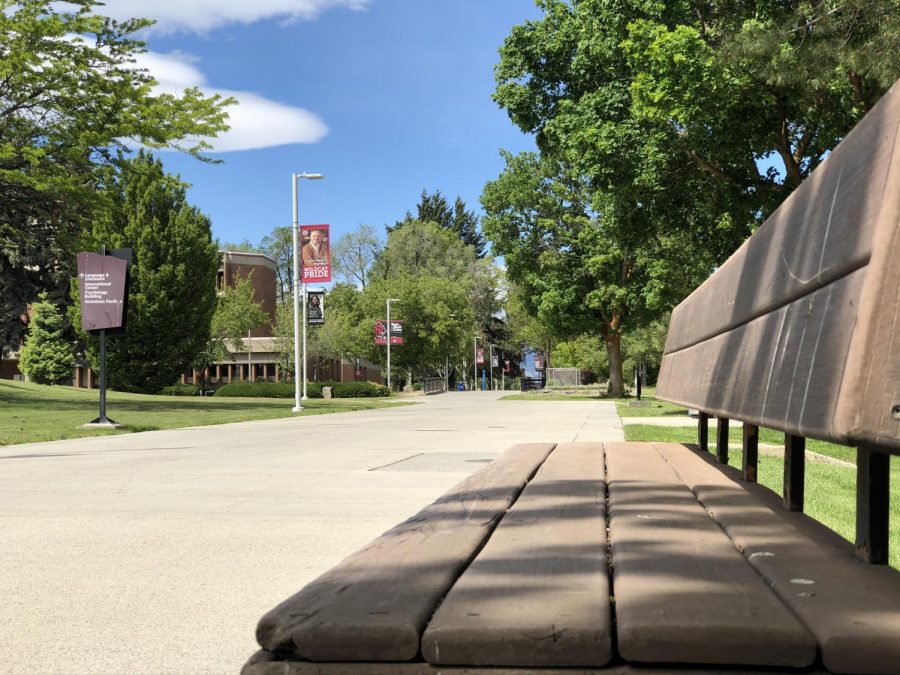 The main walkways through campus, usually occupied by students, were empty all quarter due to the campus shutdown caused by COVID-19. Most buildings were closed as well.

While COVID-19 will likely remain for the near future, campus is being prepped and classes are being planned for students to return for fall quarter.

In an email to campus, CWU President James L. Gaudino announced on May 26 that the current plan is for in-person classes to resume for fall quarter. While the plan is for students to return, it will remain flexible and could be adjusted depending on different circumstances.

In this plan classes will begin earlier and end early then they typically do. The first day of class will now be Sept. 9, and the last day will be Nov. 24. In his announcement email, Gaudino said this is to ensure students don’t have to leave campus and then return after Thanksgiving break.

In the fall, CWU will offer four different types of classes; Traditional, where students will be in a classroom with extra precautions taken; Hybrid, where class time will be split between the classroom and online; synchronous online, where students will login on at the same time and interact with the professor and each other at the same time; and asynchronous online, where students complete their work at their own leisure, with no set time for class. The types of classes offered will depend heavily on the subject matter of the course.

Gaudino said when he first proposed this plan to the board of trustees, he anticipated a split of roughly 50% of classes online and 50% holding some sort of in person component.

Changes are being made to campus so that students remain safe in the fall.

Tables are being moved in the SURC and inside the dining halls to ensure that students are six feet apart when eating. Academic and other buildings on campus will be deep cleaned constantly to limit the spread of germs. Clubs or organizations who meet with have to ensure that their members maintain distance throughout the event.

While the rooms in residence halls conform to Center for Disease Control guidelines, with beds over six feet apart from each other, the common areas will have to be adjusted to ensure students remain distanced. There will also be signs throughout campus reminding people to wear a mask and to remain a safe distance from other people.

There are also no plans for larger gatherings on campus in the fall. Events like freshman convocation will not take place, as it is not possible to hold the ceremony while remaining under phase three’s gathering limit of 50 people or less.

“We’re basically balancing the educational expectations that we believe that define Central with the safety of our students, faculty and staff,” Gaudino said.

While the plan is for Kittitas County to be in phase three by the time classes begin, the likelihood of a fall commencement for the class of 2021 remains low. Gaudino said with how many people attend the ceremony, the only way they could proceed with a full in person commencement in the fall is if Kittitas County is in phase four in October or November.

“It’s literally thousands of people that come to Ellensburg graduation, and probably a thousand of more that come to the west side graduation,” Gaudino said. “There’s no way we can do that face-to-face under the current conditions.”

When classes resume, students will notice the differences on campus.

“It may feel normal after a while, but it won’t feel normal in the sense of what it was like before the pandemic for a while,” Gaudino said.

Gaudino said it is tough to know exactly how many students will return to campus in the fall, as only a third of students at the Ellensburg campus live in campus housing. However, there is anecdotal evidence students will return, as Gaudino has heard from landlords that students are signing apartment and housing leases for the upcoming school year.

“There are indications that a significant number of students are planning to come back to Ellensburg,” Gaudino said.

In addition to the Ellensburg campus, CWU operates seven learning centers in six other counties across the western and central part of the state. Those centers will also be under the rules and regulations of their host community college, as well as the rules from CWU. For example, the Des Moines, WA center is located on the campus of Highline College and will be required to follow Highline’s guidelines in addition to CWU’s.

Gaudino said the belief is that every county where CWU operates a learning center will be in phase two by the time classes begin in the fall, with many in phase three.

While the plan is for students to return, it is still not guaranteed.

Gaudino said the overall plan will have to remain flexible for two reasons. First, depending on how many people are infected with COVID-19, there could be additional restrictions or a relaxation of the plan. This means that if the infection rate were to go up, the possibility remains of the classes being conducted exclusively online.

CWU is also still subject to state and county regulations. While the plan for fall includes Kittitas County being in phase three of the reopening when classes resume, there is no guarantee that it will come to fruition. And while the campus can place more restrictions, they are unable to be less restrictive.

The return to in person classes was a long process, Gaudino said.

There were three different groups working independently on plans for CWU. One group was tasked with thinking about what was best for CWU specifically. One group looked at what the other universities in the state are doing. And one group talked with medical experts, including epidemiologists and neurologists.

The groups then combined their ideas and created the plan that was announced for fall quarter.

“All of it fell within the recommendations of the medical and scientific experts,” Gaudino said.

Gaudino said the plan that CWU created  is similar to what the five other public universities in the state are doing in the fall.

When a vaccine is developed for the virus, students would not be required to get vaccinated in order to return to campus. Gaudino said like with a flu vaccine, as long as a majority of students get vaccinated, people will develop herd immunity to the virus and risk of a widespread outbreak of COVID-19 will be drastically reduced.

If a student or a staff or faculty member start to develop symptoms of COVID-19, Gaudino said it is critical for them to get tested and self-isolate.

“It’s going to require us to all kind of band together and think about the other person’s safety as our own safety,” Gaudino said. “That’s the key.”

While CWU has only announced plans for fall quarter, the early ending to the quarter allows the school the flexibility to adjust the plan going forward. Gaudino said he anticipates three possible outcomes for the status of campus in winter 2021.

“The extra time during the winter break is really the time for the university to adjust to the conditions that are present at that moment,” Gaudino said.

Throughout fall quarter, and likely into winter quarter, students will be “pestered” with information reminding them of the importance of maintaining safety precautions.

“If you see me on campus, you’ll see me in a mask. And you’ll want to hold your hand up and say ‘I get it, I get it. I’ll wear my mask and don’t get within six feet,’” Gaudino said. “Because that’s going to be the message of the quarter.”