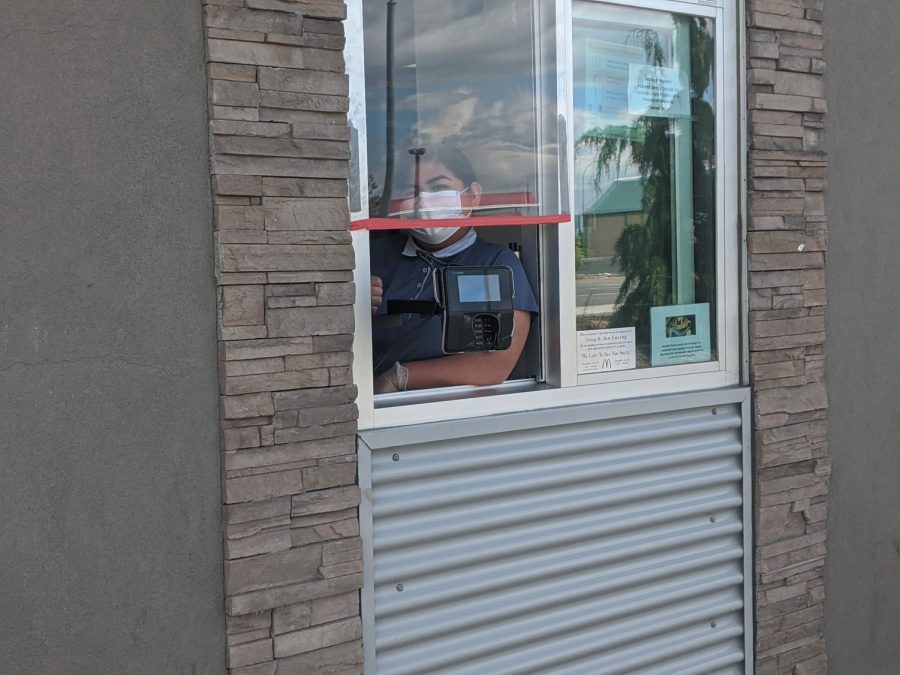 Fast food joints have stepped up their game to ensure customer and employee safety. Taco Bell, McDonald’s and Jack in the Box have closed their lobbies and made their services drive-thru or curbside pick up only. They have also added protective glass to their drive-thru windows to add an extra layer of protection between the customer and employee.

Yajayra Ramirez, a safety and health management major, is a crew member at McDonald’s. Ramirez said some of the precautions the store is taking have made it so she feels safer working.

All employees are now required to wear masks and gloves and have their temperature taken at the beginning of every shift. Other changes, however, have made it more stressful on employees.

“It’s very frustrating when there’s like new technology being added to help us get orders out to the customers as fast and safe as possible,” Ramirez said. “We’ve added tablets to our POS [point of sale] system so now people are outside taking orders on the tablets when our drive-thru is full.”

Ramirez has been working at McDonald’s since December 2019. She said lately, due to the lobby being closed, there has been an increase in the cars in the drive-thru.

“It’s been very challenging because sometimes our POS system does not process all the orders because we’ve had so many cars come through lately,” Ramirez said. “It can get confusing when cashing out cars and the order doesn’t show up.”

Shyanne Fralick, a student majoring in law and justice with a minor in psychology, also works at McDonald’s. She said it has felt a little easier now that the lobby is closed. According to Fralick, the drive-thru has set time goals for how long it should take the food to go out to a customer. Goals have been harder to reach due to the number of people coming through during rush times.

“Our times do keep going up because we’re holding cars, and that’s one thing that’s been stressful,” Fralick said.

Fralick said other than drive-thru times changing, she likes that they are doing only drive-thru because there is less to look after compared to when the lobby was open.

Lobbies for many fast food joints are opening after the stay-at-home order is lifted. Due to social distancing, stores will have to make changes in order to ensure the safety of their customers and employees.

Ramirez said although they will be taking many precautions for when the lobby does open up, she still feels a bit unsure about it.

“We will be cleaning everything to be sanitary for both the customers and the employees,” Ramirez said. “I heard from one of the managers that we will be limiting the amount of people in the store and having employees clean more frequently.”

Daniel Cedeno, a student majoring in safety and health management, said he would like lobbies for restaurants to be open.

“Sometimes we want to eat our food warm and the only way to do that is eat our food then and there. By the time we get home, the food is already cold,” Cedeno said. “It’s nice to have a place for people to socialize.”

A big concern for Cedeno is the quality of sanitation and whether it is clean and safe for them to be there.