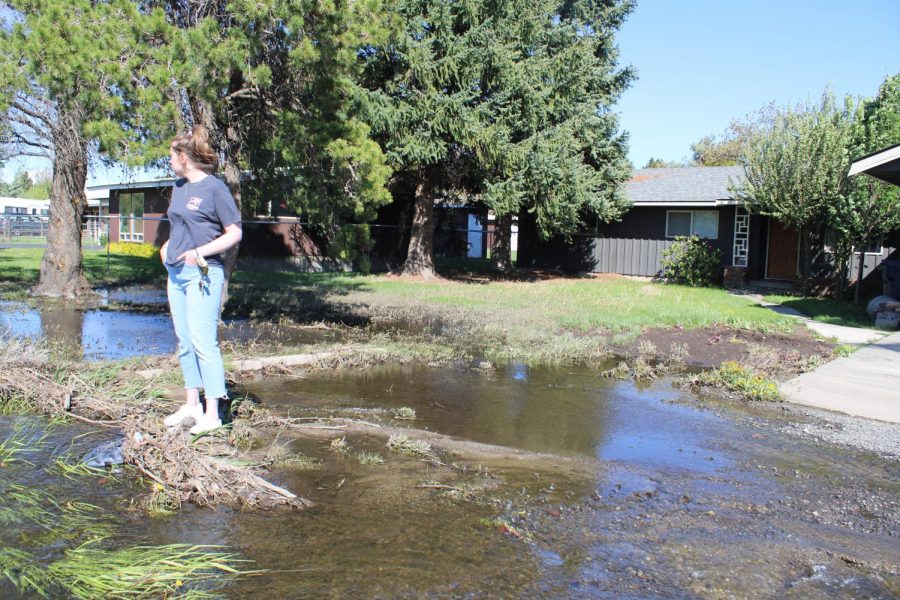 Landlords are trying to find a company to fix the flooding on a local resident’s driveway.

Preschool teacher and elementary major Noelle Wadlow said this year’s flooding has been the worst she has ever seen or experienced.

“Usually, when it floods it only lasts for a few days. This year has been significantly worse,” Wadlow said.

Kittitas County has an entire web page dedicated to being prepared for flooding. According to co.kittitas.wa.us, flooding can occur anywhere in Kittitas County, not just by rivers and streams. Floods can occur from excessive rain, irrigation canals and levees breeching or overtopping and ice jams.

When flooding occurs, the website says to place sandbags by doors and other areas where floodwaters could enter the home. The website also says to use sandbags to direct water away from the house and other structures.

The website recommends that no one drives or walks through the flood waters. Six inches of water can knock over a person and two feet of water will carry away most cars. Most flood deaths occur in a vehicle, according to the website.

“There were sandbags that were already in place on the driveway in case of a flood,” Wadlow said. “This year compared to other years have been way worse and the sandbags were completely ineffective.”

Wadlow’s driveway was not properly built. The driveway has a downward slope and it is filled mostly with loose gravel. The water has eroded away at the driveway over the years and the driveway couldn’t handle it anymore.

Wadlow isn’t sure when the flooding problem will be fixed. She said the entire driveway needs to be rebuilt in order for the problem to be solved.

“Our landlords have been super helpful and awesome during this process. The landlord is working with the City of Ellensburg and the Kittitas County office to do something about the flooding,” Wadlow said. “The property manager who lives next door lets us park in their driveway and are doing what they can to help out.”

Wadlow is currently working and has to deal with trying to get around the flood to get to her car. This is a hassle for her and a big safety concern. Wadlow also has a small dog to worry about and doesn’t want him to get swept in the waters.

“It has been nerve-wracking not knowing when the driveway will be fixed. I was worried daily about the water hitting the house if the flood got worse. For a while it was pretty scary,” Wadlow said.

With so many places being closed, it is uncertain when Wadlow’s driveway will be fixed. She will continue to park on the street or at her neighbor’s driveway. As for now, Wadlow has said the flooding has been getting better. As the weather starts to improve, the flooding also seems to decrease.