Athletes and coaches turn to Zoom to study game film, plan workouts and connect with team 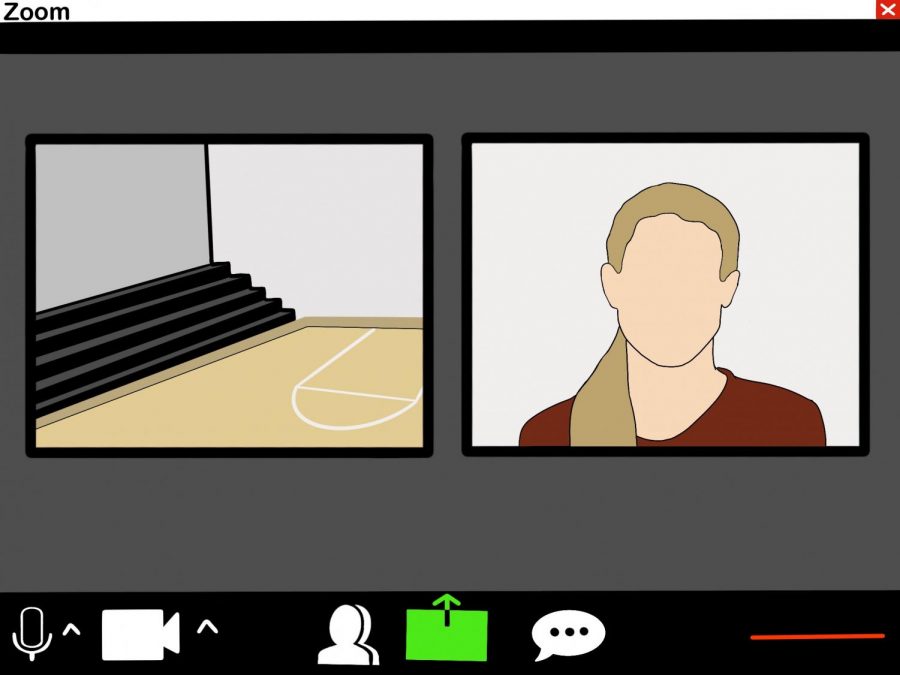 No school means no sports. However, the grind has not stopped for student athletes. Athletes have been attending Zoom meetings to continue improving their techniques and bond with the team. Teams are preparing as if the upcoming seasons will not be postponed or canceled, and coaches are using Zoom to stay in contact with their players.

Women’s basketball junior forward Kassidy Malcolm said the team has three Zoom meetings a week. On Mondays, the team is dedicated to planning what the week is going to look like and talking about what they learned from the week before. The team also talks about how the weekend went.

On Wednesdays, Malcolm meets with her assistant coach and another teammate who plays the same position as her to study film together.

Malcolm said watching film is beneficial because they can see the mistakes they need to fix.

On Fridays, Malcolm meets with all the post players to discuss the subject of the week and what they learned.

“I think it’s a nice platform for us to have right now. If not, we wouldn’t be able to meet, watch film together and communicate with one another,” Malcolm said. “Even though this situation sucks, and it would be better to be in person, we have to make the most out of what we got.

Women’s basketball freshman forward Symone Brown said Zoom has been very helpful to keep in touch with her teammates to maintain some chemistry. She also said it provides a professional environment for her coaches to reach out.

“We are still able to go over game film and the coaches can draw up diagrams. Zoom’s honestly been a really good tool to use during this time for our team,” Brown said.

Brown loves the fact that her coaches are putting in so much time and effort to properly prepare to the best of their abilities. Brown said her coach’s efforts are keeping her motivated for the upcoming season.

“Our coaches know we’re working towards the same goal because they can see it on Zoom. It just gets me excited when I can see my teammates and know that they’re working hard too,” Brown said.

Women’s volleyball senior middle blocker Julia Mellander said it is difficult not being able to practice and have a good understanding of how everyone plays together. She also said Zoom is another thing she has to manage on top of school, work and just life in general but that it’s also nice to have the tool to talk to her coaches.

During Mellander’s Zoom meetings the team goes over a book they’ve been reading together and she’s thankful the team can do that.

“As a team, we are reading a book called, ‘Chop Wood, Carry Water’ and it’s a book about life motivation and it applies to sports and life,” Mellander said.

Mellander said each week they read a chapter and have a group discussion.

Women’s volleyball junior middle blocker Leanna Shymanski said her Zoom meetings have had a very positive impact so far. She said she misses spring volleyball practices and her teammates, but Zoom has allowed her to see her teammates from home.

“Our team is using Zoom in a variety of ways. We’re actually sending each other letters. [It’s] something fun and interactive to do, even though the Zoom calls are a hard reminder that we don’t get to do what we love,” Shymanski said.

Shymanski said her team always says they’re a family, and this is something they truly want to be a part of and that they will find a way to get better. She added that writing the letters will build an unbreakable bond and help them perform better down the road.

“Our coaches have done an amazing job of making our Zoom calls really engaging. Everyone on the team appreciates their efforts,” Shymanski said.