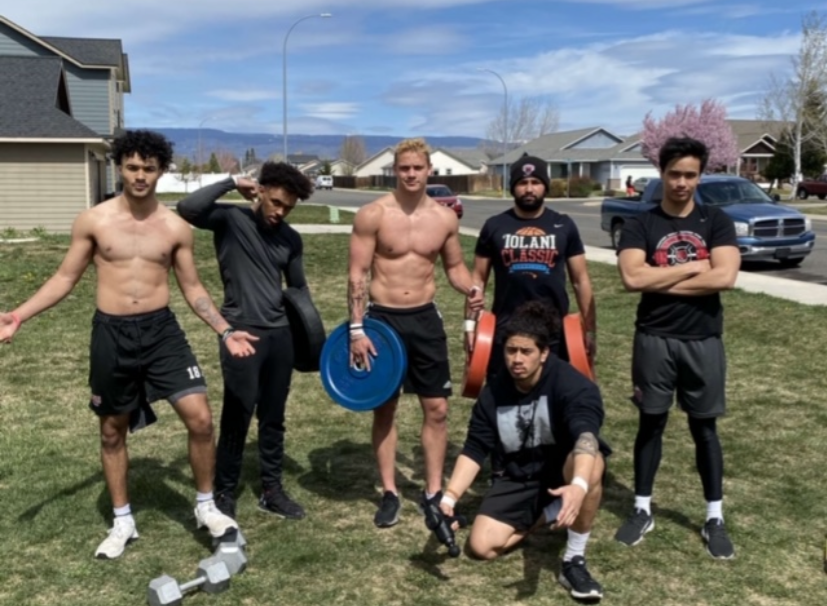 CWU Football student athletes have had to get creative for working out. Whether they returned home for the quarter or stayed in Ellensburg, all gyms across the country are closed. Some of the student athletes think the team’s physical shape will take the biggest hit due to COVID-19.

With sports on an indefinite pause in America, CWU football has had to get creative in their offseason program. Due to COVID-19, athletes in fall sports can’t practice and will miss out on other things that usually prepare them for the season.

CWU Football head coach Chris Fisk said this offseason is unlike anything he has seen.

“There’s no playbook for this,” Fisk said. “Nobody’s been through this before.”

With no spring football, Fisk said the biggest thing the players are missing is the practice time on the field.

Finding ways to stay active can be hard right now. Fisk said he has tried to make up for the lost time. With all gyms in the state closed, Fisk has challenged players to get creative with their workouts.

Although players can’t report their physical activity due to NCAA and conference regulations, Fisk has sent players videos of NFL legend Hershel Walker and movie character Rocky Balboa to show them how they can work out with limited equipment.

“The kids are trying to substitute what they can for what they have,” Fisk said.

Senior wide receiver Jojo Hillel moved back home and is able to work out at a family friend’s gym while still maintaining social distancing.

Sophomore wide receiver Tai-John Mizutani, on the other hand, has decided to stay in Ellensburg. He travelled back home to Hawaii for 10 days and came back to be with his team.

“Luckily one of our teammates has a gym in his garage. We’ve been working out in there and running sprints up and down Water Street,” Mizutani said.

While some players have workout equipment to use right now, not everyone does and Mizutani said that could be a problem when practices come back.

“I think the main difference will be our team’s physical shape. Since a lot of people don’t have access to gyms, it will be hard for some people to maintain the strength that they would’ve had if they were able to work out,” Mizutani said.

While Fisk has worked to make up for missed practice time, he’s also trying to help players outside of football. Fisk said before their team meetings, players have one-on-one meetings with coaches to check in on them. During these weekly Zoom meetings, players talk with coaches about their academics and how to adjust to online classes.

“I think what is having the biggest impact is not being able to practice. Those reps in practice are so valuable and as much as you can learn in a classroom, you cannot replace the live reps you get on the field,” Hillel said. “Those trials and tribulations on the field allow you to make the mistakes and fix them immediately.”

Fisk said team meetings begin with conversations about how players are handling the situation. The team has even started a book club, where players read a couple chapters each week and discuss them in a Zoom meeting. Fisk said this is all in hopes of building a comradery among players.

“Just talking, trying to have that social interaction,” Fisk said. “Football is a game of brotherhood.”

For the football team, the spring game is their last spring practice. The team opens the practice up to fans to showcase their skills early in the year before the season rolls around. The spring game won’t be happening this year.

Hillel will miss his last spring game with the Wildcats. He said missing out on the game not only affects getting ready for the competition but will also have an effect on the community.

“The spring game is also huge in the community as we always do a kids camp the morning of the spring game. I am sad that I will miss my last spring game,” Hillel said.

Mizutani also expressed his feelings about not having a spring game this year.

The spring game isn’t all about being ready for “fall ball,” according to sophomore Oromrow Opiew.

“Not having a spring game actually hurts a lot because spring ball is the time you compete. But not [by] playing games,” Opiew said. “You’re anticipating to ball up against your teammates and show your coaches what you can bring to the table.”

Opiew said his biggest struggle with having practices stopped during this time is a little different from his teammates.

“Not having Coach Perry to help me through my rehab because I had to get surgery about two months ago,” Opiew said.

Opiew also sees this time as a blessing in disguise for himself and other teammates to be able to get healthy for when they can return to practice and games.