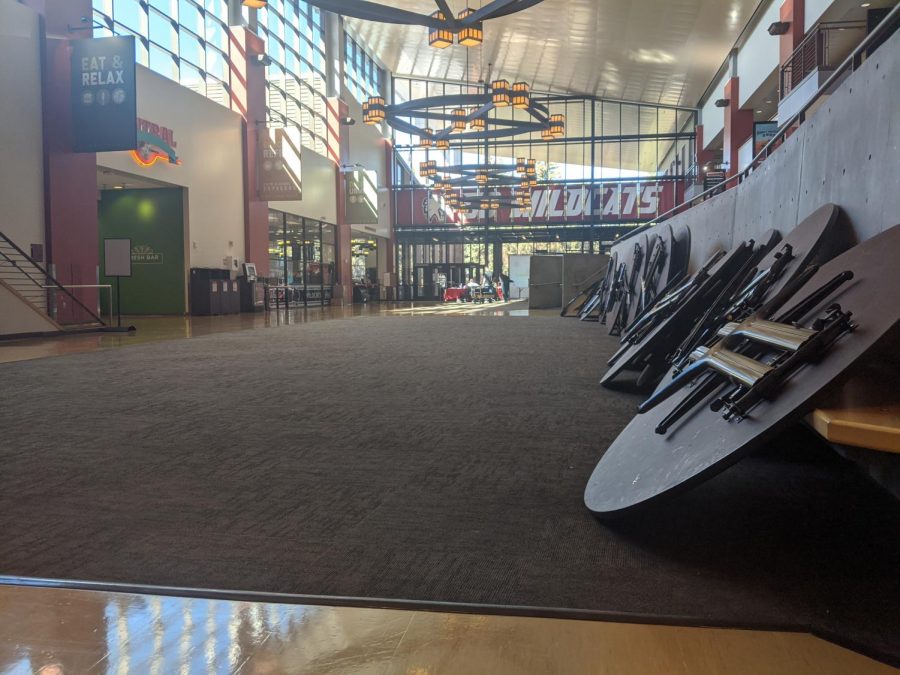 CWU Dining Services has terminated the majority of its student employees, according to Director of Dining Services Dean Masuccio. This was announced via an email employees received from Assistant Director Denise Payton on April 9.

“I am sending out this email to let you know we do not have any work available due to impact of needing to moving classes online due to covid 19,” Payton said in the email. “Because we do not foresee business changing this term, we will be terminating all of your jobs so you can apply for the new covid 19 benefits that have been made available.”

The email goes on to explain that student employees were not eligible for federal unemployment benefits while they were still hired, but that they now can and should apply for them. Payton warns in the email the Department of Labor may currently be backed up with claims due to the impact of COVID-19, and provides a link to the CWU website’s COVID-19 FAQ .

“Our hope is to be back to full operations in the Fall,” the email said. “At that time, we hope to have you back on our team in Dining Services.  If you plan to return to Ellensburg in the Fall, and would like to be added to the list to be contacted about Fall employment with us, please email dining jobs.”

According to Masuccio, while the majority of student employees have been terminated from dining services, some remain employed to support the current remaining operations.

“The majority of those that have been terminated in the system were not present in Kittitas County or were not interested [in returning],” Masuccio said. “But there are some that were local that were also terminated.”

Masuccio said those who have been kept on their jobs are primary student coordinators, a position created last quarter, to help with support operations. He added that dining services is currently serving 3% of their normal amount of customers and he looks forward to returning to 100%.

Vanessa Hysmith, a junior who was working as a barista, said she thought she had already lost her job before she received the email.

“I was kind of surprised, I was off the schedule and I assumed my contract was up,” Hysmith said. “But I had tried to file for unemployment last week and, because I was still employed at the school, I couldn’t get any benefits. So, when I did get the email I was like ‘oh finally.’”

Brianna Winegar, who also worked as a barista, said that she felt confused by a variety of messages that were coming from the Dining Services staff. According to Winegar, she was told in emails received two hours apart that Dining Services both did and didn’t have hours for student employees to work.

“I kept getting a lot of mixed signals. [Payton] shortly took over all the scheduling and communication which we had never really communicated with her before,” Winegar said. “When I got [the termination email] I was more relieved that they finally made a decision because honestly, the indecision of it and still technically being employed screws us over more with unemployment benefits.”

Cassie Creighton, a student coordinator who was laid off, said she never got an email announcing her termination. She said she found out in a group chat she is in with fellow employees, and even though she got no email, she logged into MyCWU to find she had been removed from her position.

Regardless of mixed signals, Winegar said that she hopes to get her job back in the fall. She added that she will be looking for a new job in the meantime, and her returning to dining depends on how that goes.

“I like the job, I like the people and I like working on campus,” Winegar said. “But if I were put in a position where I have to get another job, I may stay at that job, depending on how the management is there.”

Hysmith, on the other hand, said she is done working for Dining Services and she will be looking for another job.

“The way they handled everything, I felt a little bit like they’re like ‘oh virus happened, we’re just gonna fire all of you and not come up with any plans or anything,’” Hysmith said. “I am kind of done with dining.”

Hysmith said until she finds a new job she will be using money she had saved up for a car to pay for rent, which would cover her for a few months.