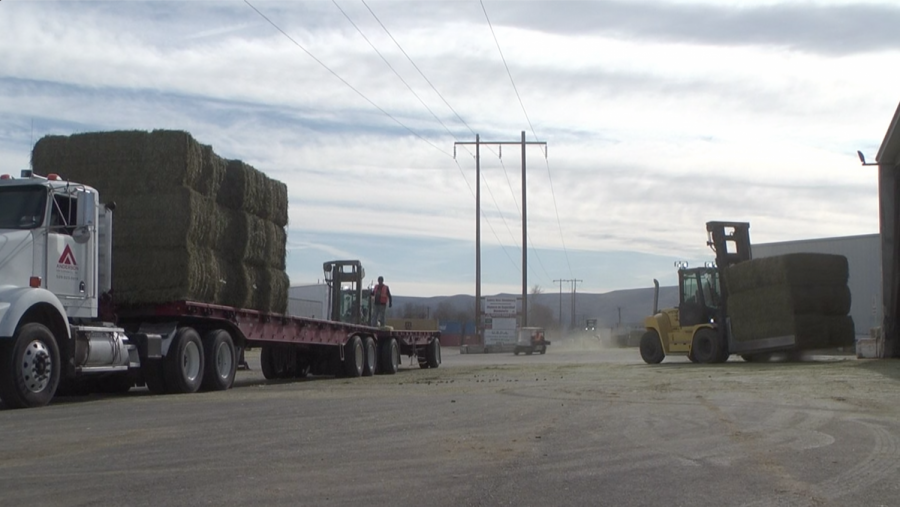 The coronavirus outbreak is not only impacting the healthcare system but the global supply chain as well. In Kittitas County, the loss is trickling down to hay farmers and exporters.

China has the world’s second largest economy and the closure and slowdown of factories are causing significant damage to the global market.

The decline of imports into the U.S. has led to fewer empty shipping containers that hay exporters use to fill and send to international markets.

Hay is a major cash crop in Kittitas County, producing about $50 million annually, according to the Employment Security Department (ESD) of Washington State.

Stone Wings II, LLC. is a hay export company with headquarters in Ellensburg. Its primary market is in the Middle East and Southeast Asia.

General Manager Bill Haberman said he has seen some shipping lines avoid countries that have a higher risk of virus infection or countries with port lockdowns like Kuwait.

“This will cause us to have to step back, we will not be able to move hay as efficiently and on schedule as we’ve been doing in the past,” Haberman said. “Without containers, without a vessel, the hay just sits here.”

According to Haberman, shipping lines normally allow them to book a number of containers on a vessel within two to three weeks. Recently, their salesman could only find a booking that is eight weeks away, at the end of April.

“So, if that’s the case, then we’re going to have effectively two months where we’re not able to move as much product,” Haberman said.

He explained that the slowdown of hay movement will also have a ripple effect on the farmers.

“We’ll continue to harvest, the farmer has to cut the hay, he has to plant, got to continue his business,” Haberman said. “We’ll have to take a look and see when we could move that hay and let the farmer know to our best of knowledge [that] we’ll have to store it for a certain period of time.”

With 5% or less of their sales in the domestic market, Haberman says there are not many options but to wait for the situation to get better.

“We’ll just have to ride this storm out,” he said.

Daniels said they are facing challenges of container and vessel shortages.

“The carriers have avoided 105 sailings from China [and] over 100 sailings to the U.S., to the West Coast,” Daniels said in an interview on Feb 28. “And if the ships don’t come in, then those ships are not available for us to export our goods.”

She said all they can do is find every space available and every container they can in the Pacific Northwest (PNW) region.

“It’s not realistic to truck your container down to California and have it export there, where there may be more available sailings,” Daniels said. “People exporting from the PNW, I mean we are kind of stuck with whatever [vessel] is coming into the PNW.”

According to Daniels, because of the decreased number of ships at the port, terminals are minimizing their operation hours.

“The days that terminals are closed, we can’t truck so our trucks are down,” Daniels said. “And if we can’t truck, we can’t get empty containers in front of our production line, so they’re down, it has a big ripple effect.”

Daniels expressed that it’s still early to tell how big of a revenue loss Anderson Hay faces in the hay exported to international markets.

“[The hay will] still move, just not in the week they were originally planned,” she said. “So they trickle down, if more vessels skip, that just builds a bigger snowball.”

No. 9 Hay L.L.C. is a hay producing and exporting company in Ellensburg that ships products primarily to Asian countries such as Japan and South Korea. Bob Haberman, is co-owner and brother of Bill Haberman.

Bob Haberman said the coronavirus situation has affected their export business due to the lack of shipping containers.

“[I’m] frustrated that it’s having such an impact in the everyday lives of everybody in the world,” Bob Haberman said. “Life has to go on and you do what you can to protect yourself and you keep moving forward.”

While the weather and the coronavirus situation could affect things, No. 9 Hay plans to plant and harvest hay to yield more output this year than that of 2019, according to Bob Haberman.

“[To] put up our high quality as possible as every year,” Bob Haberman said. “That’s our every year goal.”