As CWU Track and Field send Samantha La Rue and Erykah Weems to the indoor national championships in Birmingham, Alabama, the rest of the team is preparing for outdoor season to begin this weekend. 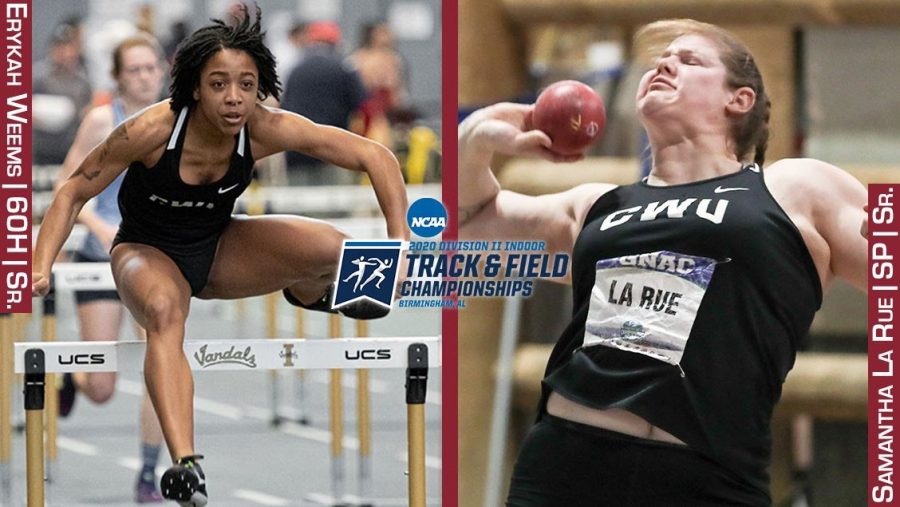 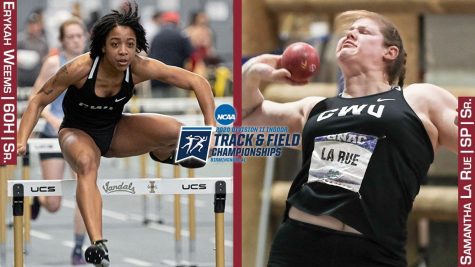 As the CWU Track and Field indoor season comes to a close, some of the athletes on the team are gearing up for the NCAA DII Indoor National Championships. Seniors Samantha La Rue and Erykah Weems will be competing and representing CWU at the event.

Head coach Kevin Adkisson will be accompanying both La Rue and Weems as they compete on March 13-14 in Birmingham, Alabama. Adkisson said both athletes have been on the upswing. Adkisson is confident both of the athletes can improve or at least match marks they’ve achieved throughout the season.

“When you have an athlete like these two, who have been building through the season and producing great marks all the way up to the final meet, that just tells you they’re ready,” Adkisson said. “When [La Rue and Weems] go to the meet and continue to show that type of competition and improvement, they’re going to have a great chance to make the final.”

“My main goal is to walk away and to not ever think that I didn’t do the best that I could,” La Rue said. “I want to make sure I show up and do all that I can. Whatever ends up happening will be awesome.”

La Rue is entering national championships ranked 14th in the country with a mark of 48 feet in the shot put. She hit this mark earlier this season at the NCAA DII Indoor Last Chance Qualifier. The throw was a personal record (PR), beating her previous best throw by over a foot.

The current leader in shot put nationally is senior Payton Roberts from Missouri Southern State University, with a throw of 52 feet, 11 inches.

Erykah Weems is competing in the 60-meter hurdles.

Weems said she is very excited for the upcoming meet and is hoping for the best. She said she has come a long way in the 60m hurdles and it is now one of her stronger events. It’s an event she feels prepared to compete in nationally.

“I know as long as I stay level headed, trust in my process, my coaching and in myself then I’ll be able to accomplish all I want to accomplish,” Weems said.

Weems enters the national championships ranked 12th nationally in the 60m hurdles with a time of 8.61 seconds. Weems hit this time earlier this season at the GNAC Indoor Championships.

The current leader in the 60m hurdles nationally is freshman Denisha Cartwright from Central State University, Ohio, with a time of 8.49 seconds.

Adkisson is looking forward to having all of his athletes competing in the outdoor season. He said the athletes have been training diligently and working hard to ensure they are ready to compete in the upcoming weeks. The track and field team is expected to have newcomers that will help the team take steps in the right direction. Adkisson said they are looking forward to the newcomers on both the men’s and women’s side who will contribute to the outdoor season.

“They’ve been working really hard and being really patient,” Adkisson said. “We’re excited to see what they’re ready to do.”

“We have people in those events that can score,” Adkisson said. “That’s an exciting zone for us.”

Adkisson said the team is looking forward to competing against conference rival Western Washington University (WWU). Adkisson said a goal for the team is to reach WWU’s level of competition.

“We want to close that gap as best we can, and see if we can put some pressure on them,” Adkisson said.

During her outdoor season, La Rue’s main events are discus, shot put and hammer. She is looking forward to her final outdoor season. She is focusing on matching her indoor shot put mark and also wants to set a personal record in discus.

“It would be great to PR in discus,” La Rue said. “That’s something I’m going to be having some fun with.”

La Rue is focusing on staying healthy so she can compete well in the outdoor season. On top of La Rue striving to stay healthy and finishing her indoor season strong, she is also focusing on staying in touch with her teammates who have already been training for outdoor. She does this by asking her outdoor teammates about their own personal goals, how they are feeling and if they’re having fun outside.

“It should be a really great transition,” Weems said. “I’m feeling really strong and very confident within the race.”

Weems is striving to stay as healthy as possible. This is to ensure she is ready to compete in her outdoor season once she finishes the last of her indoor season.

“I’m listening to my body and making sure I’m going to the trainers,” Weems said. “I’m looking forward to it for sure.”

Weems is excited to be competing alongside some of her teammates in the outdoor season. Weems said her teammates are great competitors and create a great atmosphere, which has been building their new program.

“Those ladies are always an honor and a pleasure to run with,” Weems said. “They bring so much to the team.”