Going green one salon at a time 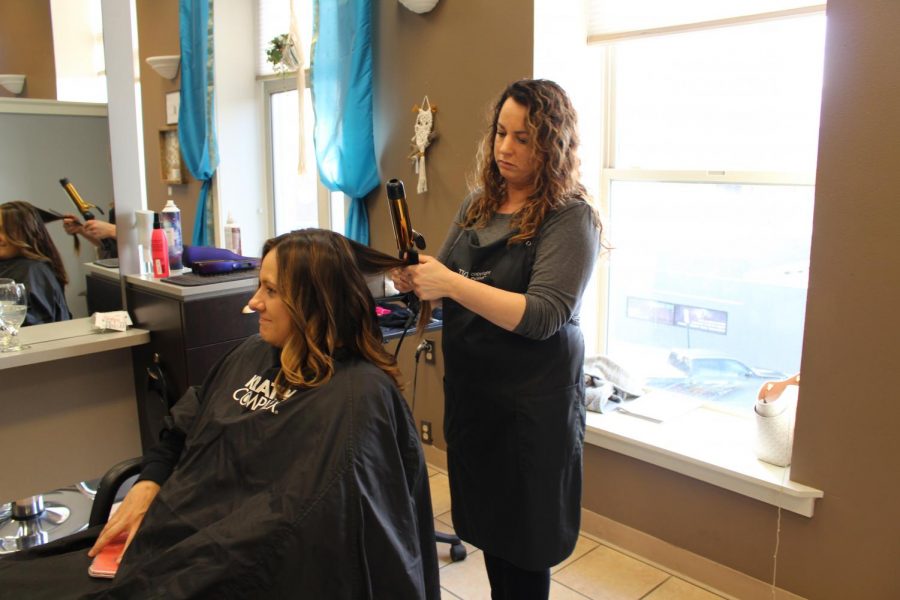 If a customer goes up the stairs into Mangos Salon to get a haircut, they may wonder where the hair goes. If it were a year ago then the hair would have just been thrown into the garbage without a thought. Well, not today.

They send multiple waste bins to Mangos Salon for them to use for recycling. Everything from used wax strips to hair color can be recycled.

The bins make it easy to throw away items that the employees never knew what to do with, like mannequin heads, according to Stephanie Castillo, the Mangos Salon Manager.

According to the Green Circle website, their mission is to allow salons to repurpose and recover up to 95% of the resources that can be considered waste.

So far, a little over 2,000 salons across the U.S. are Green Circle Certified. Over six million pounds of waste has been diverted from landfills and waterways, according to the live count on the Green Circle website.

“Green Circle is fantastic because they fully support you,” Castillo said. “They make it really really easy.”

Once the bins are full, they get taken to Green Circle where they proceed to process the waste.

Green Circle partners with other companies to process the more contaminated products such as bleach and hair color.

While Mangos Salon just recently went green, it does not stop them from wanting to do more.

What next step could they possibly be taking? Castillo said the salon is seriously considering beginning to compost.

“We’ve already started this. We might as well go all the way and then we would have zero waste,” Castillo said.

There are minimal items that don’t have a way to be thrown out such as razor blades and perm solutions. However, according to Castillo, the sorting bins are still “way better than before.”

Mangos Salon is currently the only salon on the east side of the mountains that has been Green Circle Certified. Castillo said it would be really cool to get at least 10 other salons in Ellensburg to go green.

“I think once people realize that it’s really not that hard, and they make it really easy for you, then hopefully [more salons will become certified],” Castillo said. “To me, it’s a no-brainer.”

Castillo invited Delainey Waddell and Sara Holloway, co-owners of The May Salon, to check out the differences in going green. The May Salon loves the idea of going green and they are now in the process of becoming certified, according to Waddell.

“They make it super simple for you,” Waddell said. “I mean, it’s as easy as just putting it in separate bins and picking them up. They really have thought of it all.”

Salons produce tons of waste, Waddell said. Certain products can not be reused after a single use, so they just get thrown away.

By going green, the salon will now have a system to recycle practically everything.

While Green Circle is primarily for salons and spas, Waddell hopes to see them start to intermix with other companies.

Everyone creates waste, so there should be some form of appreciation for going green, according to Waddell.

The May Salon is in the process of training to become certified.

After a conference call and a couple of informational videos, the salon will receive their starting package which includes the waste bins. They hope to become certified in the next year.

About two years ago, Castillo visited a New Mexico salon that was Green Circle Certified. Ever since that visit, Castillo wanted to have that same certification.

The visit was really, really cool, Castillo said. She, and various employees, discussed how much waste they just throw away each day saying it just bugs them.

About 42,000 pounds of salon waste is thrown away each day in the United States, according to Castillo. Waste includes hair, waxing strips, curling irons, hair color, used foils and more.

Castillo wanted to see for herself just how much waste can be created. She decided to test it from a single visit.

“From one client, I just saved everything that I used just to kind of see,” Castillo said. “It was shocking. I was like, that’s it. We are just going to do it.”

Mangos Salon did a practice run for a couple weeks before officially being certified. The practice run helped the employees get into the habit of recycling into all the bins.

Castillo said a lot of sorting is involved with going green.

It is not as easy as throwing everything into the garbage.

After getting into the habit of sorting all of the waste, the salon was ready to officially go green.

Mangos Salon has been receiving exciting reactions from clients, according to Castillo. One client, Nancy Schnebly, said that people are more aware now than ever about going green.

“I think this will benefit the community a lot,” Schnebly said. “I’m glad they are doing it, and I expect other salons will follow.”