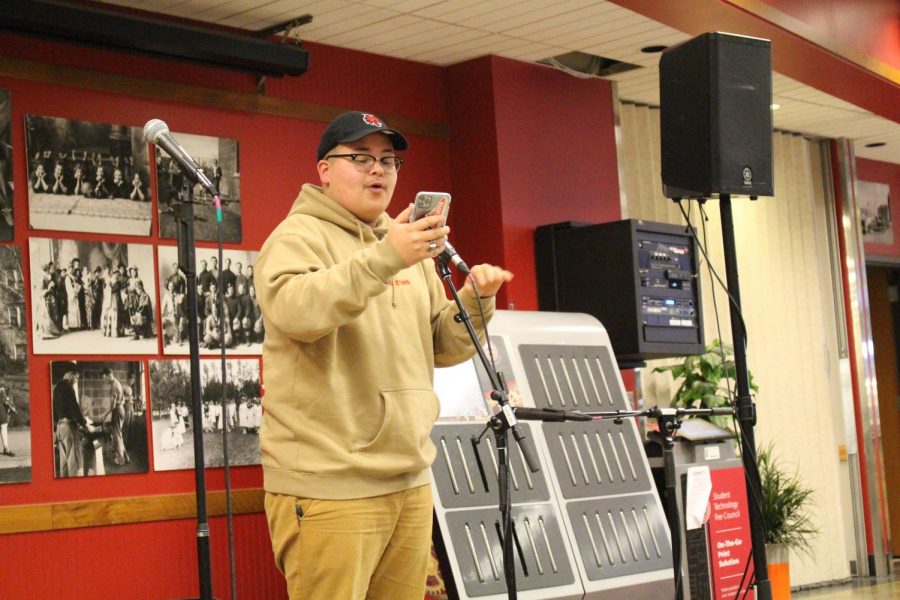 It is Open Mic Night and students are waiting for the first performer. A male with brown curly hair and glasses walks up to the microphone. After reciting an emotion-filled poem, the audience can see his aspirations to be a poet.

The performer, Champagne Ryder Jr., tries his best to be at every Open Mic event to showcase his original poetry.

He chooses to write about impactful events in his life including his dad passing away last year, substance abuse, being bi-racial and dealing with both Black and white struggles.Ryder chooses not to hold back when expressing himself through his poems.

“That’s one thing I definitely promised when I started to go write,” Ryder Jr. said. “I wasn’t going to write someone else’s story. I can’t be fake on stage because people won’t resonate with it.”

Ryder Jr. has been writing poetry for about five years and it all stemmed from his original goal to be a rapper. Ryder Jr. has taken up poetry competitively for the last three years.

Ryder Jr. is a member of Rain City Slam, a competitive poetry organization based in Seattle. When he can make it over to the west side, Ryder Jr. volunteers for the organization and helps run their social media. Rain City Slam sends Ryder Jr. to competitions and even nationals, if qualifications are met.

Ryder Jr. is the 2018 Hoodie Slam Grand champion, Rain City Grand Slam runner up, a finalist for Battle of the Word and he has been published twice by Train River Publishing Co.

Competitions are typically structured with three rounds and three minute poems each round. Each slam setup is different and can eliminate a different amount of poets each round. Judges are random members of the audience, and they change each round.

“If you’re not writing about a police officer killing a black kid or social injustice to a minority group or people of color, then it sucks,” Ryder Jr. said. “I mean, there’s those rare exceptions but if you’re not talking about mental illness or how you overcame this or that then you don’t score well.”

According to Ryder Jr., if he does not cry during the writing process then he does not expect to make others cry.

While reliving his memories to write poetry is hard for him, he says that he hopes to reach out to people like himself. He hopes to touch the people who feel like odd ones out, the people who think they don’t fit in and the types of people who are too afraid to speak about their own personal situations.

“I hope people can find peace in their own life by listening to mine,” Ryder Jr. said. “I mean, at the end of the day, it’s just a mass healing session.”

“His words are so powerful. Everything he writes has some sort of meaning and the way he writes is so beautiful,” Tonder said. “The way he speaks leaves such an impact on you, you’ll be thinking about what he said for the rest of the day.”

Ryder Jr. grew up in Skyway, Washington with his parents and older sister. During his senior year of high school, he went through some difficult times and was in danger of being kicked out of school. However, he overcame the situation he was in.

“I’m showing people you can come out the other side still strong, regardless of how you started,” Ryder Jr. said. “That’s why I write as much as I can, there’s still someone going through the fight, going through a struggle, who needs a glimmer of hope.”

Ryder Jr. has a clear confidence when reciting his poems, according to Phothivongsa. His message is clear and leaves listeners analyzing his poems.

“He seems to be abstract in the fact that we can’t do anything alone,” Phothivongsa. “We have to be vulnerable and build each other up. I also love how his poems all talk about breaking free from a shell of some sort, that nothing good came from being still.”

Ryder Jr. is a junior currently pursuing a major in information technology and administrative management with a specialization in cybersecurity.

With his social skills, he plans to one day be a cyber risk analyst. He currently works at The Porch and holds a second job in the CWU Wildcat Shop at CatTech.

Regarding poetry, he hopes to possibly get a book published and impact others through his work. For now, Ryder Jr. is enjoying the therapy that comes out of poetry along with the travel opportunities which allow him to connect with other people.