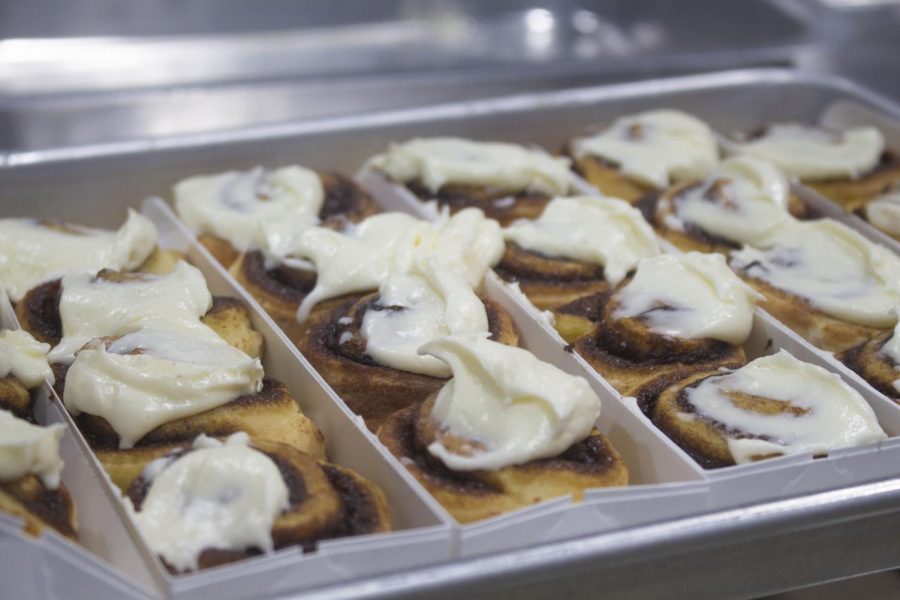 If you are a fan of cinnamon rolls, then this new development will be the place for you. Pilot Flying J, a travel center company, just opened up on North Dolarway Road near the west I-90 roundabout.

The truck stop includes a Cinnabon, Arby’s and typical convenience store. Truck drivers are able to park in one of the roughly 50 available parking spots. Overnight parking, laundry machines, five showers, a lounge room and gas fueling stations are also part of the center.

The land was previously home to a local restaurant, Blue Grouse, before the roof collapsed leading them to close forever. Early last year, Pilot Flying J announced its plans to begin construction.

“The Chamber is excited for the addition of the travel center,” McGuffin said. “It is a state-of-the-art travel center.”

According to McGuffin, representatives for the Chamber of Commerce received an impressive tour of the facility prior to its opening.

While the school district doesn’t have any definitive plans for the check at this time, McGuffin said it was a very kind gesture.

The start of a new business also means more job opportunities. Pilot Flying J brought Ellensburg about 50 new jobs, all of which have now been filled.

When students returned from winter break to another Arby’s, many were concerned and confused. Feelings primarily came from the fact that Ellensburg already has an Arby’s. Two CWU students, Sophomore Kendra Askevold and Senior Leilani Sheffey are among some of the students who are upset about the addition of a second Arby’s.

“I think they could have put in something better than Arby’s,” Askevold said. “I don’t know, we just have a bunch of places already that are equivalent to an Arby’s.”

Askevold said a Chick-fil-A would’ve been nice. However, while an additional Arby’s may have some people feeling uneasy, the brand-new Cinnabon seems to be a hit.

“Cinnabon I like,” Askevold said. “I like Cinnabon because I am tired of having to go to Yakima if I want my Cinnabon.”

It’s not only the saved commuting time that seems to hook people to the new bakery.

“Cinnabon, yes,” Sheffey said. “Cinnabon is new, it’s variety. There’s not many places like that to go in Ellensburg.”

Pilot Flying J is not the first truck stop in Ellensburg. The Flying J is located on the opposite side of town, near the I-90 Canyon Road exit. CWU student Paige Swartz works as a waitress in The Flying J restaurant.

According to Swartz, Arby’s and Cinnabon are great additions to the city when it comes to thinking about truck drivers. Swartz sees many truck drivers pull up at the last minute to order food, so she said the additional truck stop will be beneficial.

“It’s easy food,” Swartz said. “I mean, at that point, they just want food because they are exhausted from driving. They don’t care what it is.”

According to Swartz, many truck drivers pull into Ellensburg at night and they would rather go somewhere they can park overnight. So, the importance of this truck stop providing overnight space is high.

Pilot Flying J knew what they were doing market-wise otherwise they would not have invested in that specific location, according to McGuffin. Swartz agreed, saying it will be easier for truck drivers to get off at the west I-90 exit if that is more convenient.

“I personally think that the effect is going to alleviate the load of traffic from I-90,” McGuffin said. “I think it is going to help with the management of trucks that come in through Ellensburg on a regular basis.”