From Marines to theatre 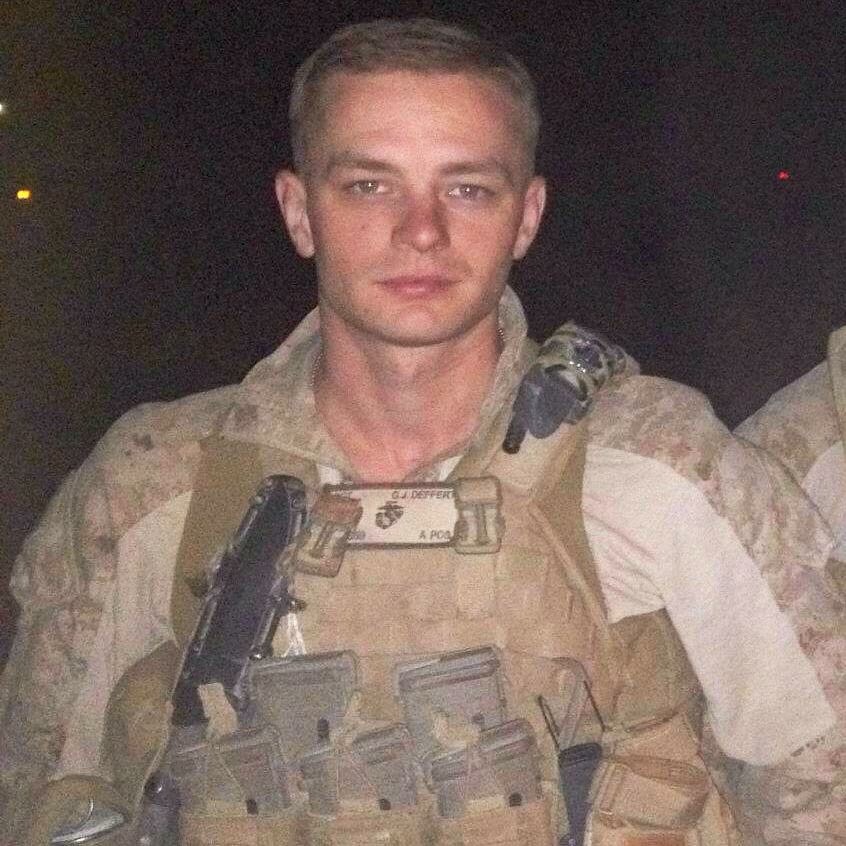 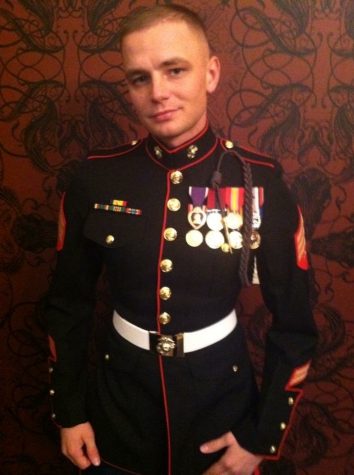 At the scene shop in McConnell Hall, you can smell sawdust, see pieces of wood scattered around the room and hear heavy footsteps on the paint-splotched floor. Oftentimes, the shrill grinding of an electric hand saw fills the room.

Garret Deffert is the master carpenter for the production of “Holiday Inn,” which opens on Dec. 5. Among other tasks, Deffert cuts out hearts and cherry blossoms from wooden boards for the stage set.

“This is what I do every day,” Deffert said with a smile. “I [enjoy] the controlled chaos, being out-of-my-mind busy. Using my imagination and working with my hands is one of my favorite things to do.”

Scene shop manager Dave Barnett said Deffert is a good leader who has grown over the two years he had worked with him.

“I will definitely miss him when he goes, he’s been a very good worker,” Barnett said. “He’s grown by leaps and bounds, as it usually happens here. They get really good and then they leave … They’re ready to spread their wings and fly.”

Besides working in the shop, Deffert has a full weekly schedule going to class, learning about movement, ballet or tap dance, memorizing his lines and rehearsing for a show or spending hours doing a character analysis.

Pursuing a degree in theatre and working as a performer have been Deffert’s lifelong passion and dream.

“Being a storyteller is my entire life right now, that’s what I look forward [to], it’s what gets me up out of bed every day,” Deffert said. “I wake up and get excited to build, to create, whether it’s building for a show or building a character.”

Time in the Marines

Behind the curtains and underneath the actor’s mask, Deffert is a former Marine sergeant who had served for about 10 years and had been on five overseas deployments.

Deffert had enlisted straight out of high school, after he witnessed the Sept. 11, 2001 attacks.

After Deffert graduated and got home at 3 a.m. from a late night graduation party, his recruiter picked him up early next morning for Marine Corps Boot Camp in San Diego, California.

“I went through recruit training and went through the school of infantry–infantry training battalion–and then I served with 2nd Battalion, 4th Marines,” Deffert said. “I was with Fox Company for [almost] 4 years.”

During his time in multiple battalions, Deffert had been deployed to Iraq, Japan, Philippines, Djibouti, Jordan and Afghanistan.

Going to different countries expanded his view of the world, which Deffert said was narrow at first, due to his upbringing.

“I was kind of sheltered in that regard culturally when I was a child,” said Deffert, who grew up in both Washington and Oregon. “I lived up in the mountains. I was homeschooled in a log cabin way up in the woods with no electricity, running water, phone, internet or anything. I was shut off from a lot of culture and I had learned a lot of that along the way [during deployments].”

Deffert experienced the various cultures in the places he stayed, whether it was eating yakitori, yakisoba and sushi in Japan or listening to Jordanian locals share about their culture and religion.

On May 12, 2012, during his fifth and final deployment in Afghanistan, Deffert was injured in a bombing when his group was called out to help another unit that had been ambushed.

The explosion damaged Deffert’s internal organs, including his brain and appendix, the latter of which was removed due to inflammation.

“I was having memory problems, balance problems, my whole body ached all the time,” Deffert said. “I had a lot of damage to muscles, ligaments, bones, basically everywhere on my body.”

Deffert moved in and out of hospitals for a year and a half and spent time in the Wounded Warrior Battalion West before getting medically retired in December 2013.

He feels physically healed on most days, but there are times when he is reminded of back pain, memory problems and of post traumatic stress disorder (PTSD).

“I’ve been seeking help for a long time for it. I’ve been working on getting counseling,” Deffert said. “It gets easier. It was difficult for me to accept at first because there was such a negative stigma on the idea that somebody could have PTSD because in the Marines, you’re not supposed to be weak, you’re supposed to be strong.”

While laying on his hospital bed in Afghanistan, Deffert said he reflected on his life, where he’s been, what he’s done and who he wanted to be.

In 2014, Deffert moved to northwest Montana to spend time with his grandmother, who was ill with cancer. He completed an Associates of Arts degree and got heavily involved in theatre at the local Flathead Valley Community College before transferring to CWU in 2017.

Since entering the field, Deffert has had performance and carpentry jobs at prestigious theatre companies in Montana called Bigfork Summer Playhouse and Fort Peck Summer Theatre.

For a “Peter Pan” production at Fort Peck this summer, Deffert was both the pirate Bill Jukes and the primary flight operator for Peter. After his character died, he had to run behind the curtains to pull on the ropes to help Peter fly.

“I love the complex elements … There’s so much that could go wrong at a moment’s notice, I don’t know what it is, but that’s when I’m the most focused, the most present [and] have the most fun in general,” Deffert said.

Deffert’s also been a part of about 20 film projects produced by the CWU film department. He starred in a short film called “Some Gave All,” directed by CWU film instructor Jon Ward, which can be found on Amazon Prime.

Patrick Dizney, associate chair of the theatre department who directed the production, said Deffert is completely dedicated to his craft and is everything he could ask for in an actor.

“He comes to me after rehearsals and asks questions,” Dizney said. “He loves it, so he wants to know more, he has a wonderful attitude about it.”

Deffert said it’s exciting to become the first person in his family to hold an undergraduate degree.

“It’s gratifying to finally make it to this point,” Deffert said. “I remember when I first started four, five years ago and it seemed like it would never come, that it would never happen.”

For his next steps, Deffert plans to apply to the University Resident Theatre Association in New York City and the University of Washington’s MFA acting program.