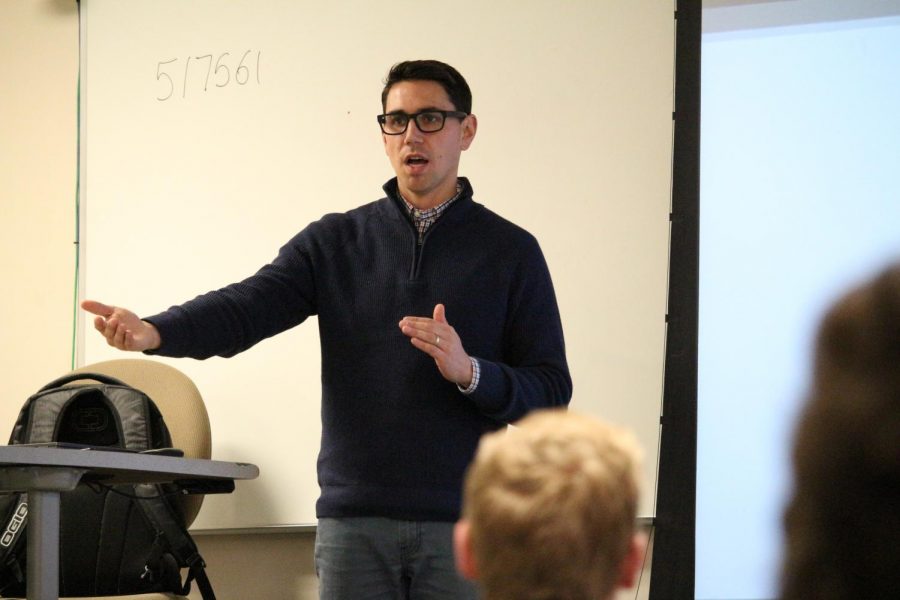 CWU Sport Management Club invites students from all majors to come learn more about working in the sports industry. As one of the newer clubs on campus, it is still in the process of growing and setting up events for students to attend.

On Nov. 21, the club hosted a meeting for students to come listen to Andy Knapp, the director of marketing for the Washington Interscholastic Activities Association (WIAA). This meeting was the third official meeting for the club this quarter. In a previous meeting, CWU Director of Athletics Dennis Francois came to speak with students about the sport industry as well.

About 20 students came to the meeting as well as some CWU faculty who were also interested in Knapp’s journey to his current position. One of those students was Kevin Bodle, who also serves as co-president of the club. Bodle said that having professionals come talk with students is a great way to get CWU undergraduates connections that will be valuable after they get their degrees.

“Networking is probably my biggest takeaway from this club,” Bodle said. “Not only do you get to meet some of the guys like Dr. Francois, who came on [Nov. 6] as well as Andy Knapp who’s coming today … but you also get networking opportunities through the people that are in the club themselves.”

Bodle said building the repertoire with fellow students that share the same passion is helpful to everyone in the club. One student that has come to multiple meetings is junior Emilio Valderas.

Valderas said he finds the club valuable because it opened his eyes to opportunities in the sport industry. For Valderas, however, it’s not just about the opportunities, but also the relationships between students and faculty the club begins.

“It’s so important to just get involved as early as you can,” Valderas said. “For me, realizing it a little bit too late is a little unfortunate, but the great thing about it is that everybody here is working for each other.”

Knapp began the speech explaining to the students in the club various things, such as his responsibilities, why he loves his job with the WIAA and his path to his current role with the WIAA. Another thing Knapp talked about was the opportunities for CWU students to get involved. The WIAA offers internships on a seasonal basis, in the spring, summer, fall and winter. The internships allow college students to help work at state championship tournaments as well as conferences.

Julie Barkhoff, the other co-president of the club,  said she has had to do a lot of learning due to the club being so new. However, she also said the resources that come with being an official club on campus has many benefits. Access to funding is one of them.

“We haven’t done anything yet and we haven’t requested any funds, but it’s on our mind and we have some plans that we’re hoping to do in winter and spring [quarters] that having access to those funds is gonna be really helpful,” Barkhoff said. “We can do fundraising, but it’s hard to get to that targeted amount you wanna get to so having that extra resource helps.”

Some of the things the club is hoping to do in the future are the Portland Trail Blazers career fair as well as a spring break trip to another city. Some of the cities Barkhoff listed as possibilities were Phoenix, Arizona and Portland, Oregon.

The club does not have a tentative schedule, meetings usually occur whenever a speaker can come to speak with club students. Because of this, Barkhoff and Bodle operate through email notifications. To be put on the notification list for the club or for more information on the club, they can be reached at [email protected] or [email protected] The club is also starting a Twitter account around January, which can be followed at @CWUSMA.