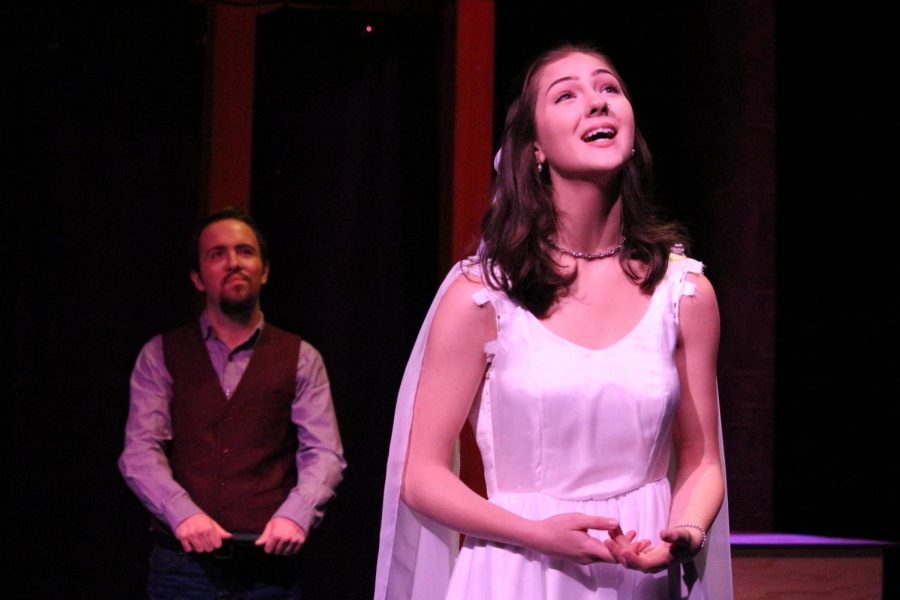 The production by CWU Theatre Ensemble ran from Nov. 15-16 and will run Nov. 21-24 in the Milo Smith Tower Theatre in McConnell Hall.

The play is partly a rendition of Anton Chekov’s “The Seagull” and is for audiences ages 17 and up.

Patrick Dizney, director of the play and associate chair for the theater department, explained why the department decided to show this play to the students.

This is one of the first plays that was based in the movement of realism, it constantly breaks the fourth wall, which means that the cast often addresses the audience directly. The revisitation of Chekov’s play was written by Aaron Posner.

“[Posner] is brilliant,” Dizney said. “And [he] so happens to be someone that I went to school with as a young person.”

Dizney said he believes that Posner did a great service to Chekov’s original play, which he says are often done poorly. Dizney said that people are often not interested in going to see a play by Chekov, not unless they want to catch up on their sleep.

“The play is about trying to find new forms,” Dizney said. “New forms in theater, new art forms and new ways of communicating about who we are in relationships.”

This is something that the play discusses in depth. The characters struggle when it comes to the complexity of their relationships.

The play has a lot of intimate and heavy scenes that involve suicide, lust and unrequited love, which can often be difficult or uncomfortable for the actors, according to Dizney.

When handling intimate scenes on stage, the actors and Dizney explained that they have an intimacy choreographer come in who teaches them how to perform the scenes in a safe and comfortable environment. Dizney also mentioned that communication and checking in with each other is incredibly important.

Garret Deffert, a theatre student who plays as Dr. Eugene Soren, talked about how there is a very strict regimen that they follow with the intimacy choreographer.

“Everything is completely consensual,” Deffert said. “We talk through everything and figure out what everyone’s comfortable with.”

Anthony Wyatt Lord, who plays as Dev, talked about how he himself handles intimate scenes on and off stage. When Lord is off stage, he said he leaves the scene to the actors on stage to give them as much privacy as possible.

“When I’m on stage, if I have to be on stage, I respect the scene and who my character is in that scene and I’m as professional as possible,” Lord said.

The actors talked about the importance of the topics and the negative effects that they have.

“Leading up to [the suicide attempt], you see the character unraveling throughout the play,” Skaggs said. “You see the choices he makes and how everyone else treats him, and how that contributes to it. And it shows how things can snowball.”

Deffert mentioned that handling topics such as these is his job as an actor and his responsibility as a storyteller. He said he examines the overall scope of it and acknowledges the fact that these topics are important.

“A lot of topics are very important to talk about,” Deffert said. “And a lot of times, people don’t exactly make the time to talk about topics such as these.”

The cast and the director say they believe the play is important because it is as an art form that covers the topics in all the right ways.

Dizney said he believes that it balances quite nicely the idea that you have an awareness of being in the theater and you can relate to and connect with the characters on a more personal level.

Skaggs mentioned that the play touches on relationships and how people learn to live with their feelings. She spoke about how interesting it is to see how the characters deal with these feelings and the way that they play out on stage, whether it works or not.

“Most importantly, it’s art,” Lord explained. “Art is so important. It shares messages in ways people can’t regularly do.

“I don’t think they’re really supposed to take anything away from it,” Skaggs said. “I think that’s kind of the point, that it’s just a stupid f##king play.”

Lord said he hopes that audiences can understand that this play is a good program for theater, and that they would spread the word.