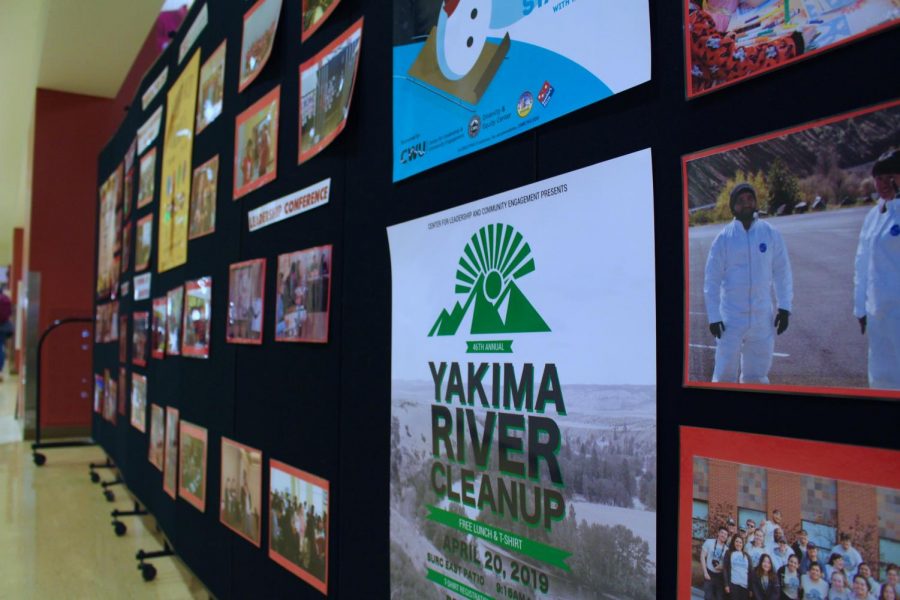 Last week the Center for Leadership and Community Engagement (CLCE) put their community service work on display for the CWU community to see. According to Maurice Watkins III, a program leader within the CLCE, the event has gone on for over five years. Watkins said that having fun while providing a learning experience at the same time is the essence of what the CLCE does.

“That’s something we hold near and dear to our hearts,” Watkins said.

“Civic engagement and volunteering through the university to connect with community stakeholders and partners are considered to be a high impact program, it promotes a sense of belonging … as well as a sense in pride and service,” Dickerson said.

Makenna Thuringer, a sophmore in biology pre-med with a minor in chemistry, is the vice president of S.I.S.T.E.R.S, a club at CWU. She put in 60 hours of community service last year. Of those 60 hours, 17.25 hours came from the CLCE. Thuringer now works for the CLCE as a staff writer.

“I’m really proud of the amount of hours I was able to do and the amount of people I was able to meet my first year,” Thuringer said. “I really put myself out there toward winter [and] spring quarter … I started networking. I started getting involved in the community. I met so many people that set me on the right path to where I am right now.”

According to Watkins, the CLCE puts on around 20 volunteer events per quarter during the academic year.

An event that’s become popular over the years is the Yakima River Cleanup. Dickerson said this year’s cleanup involved over 300 volunteers who planted hundreds of trees, disposed of garbage and fixed fences.

“The feedback and the responses that we get from students are amazing, they truly find purpose in their service and value especially with programs like Yakima River Cleanup,” Dickerson said.

The CLCE doesn’t require students to attend community events in order to volunteer for the next event.

“That’s the beauty in having all of these civic engagement opportunities, because whether you miss one, two or few that should not hinder you and we don’t allow it to hinder you from partaking in community service opportunities in the future,” Watkins said.

Watkins also said when he first got involved with serving the community, it added fuel to his fire and made him want to do more.

“For the people that I’ve spoken to in regards to helping out within the community, they’ve benefited greatly from it. Every one of them has told me they wouldn’t take anything [away] from the journey and if they could do it all over again they would,” Watkins said.

For students looking at graduate school, giving back to the community would be a great way to stand out, according to Thuringer. She also said she didn’t realize how important networking was until she got to CWU.

An event sponsored by CLCE hit home for Thuringer. A group of people went to Wapato high school to mentor students, ranging from freshman to seniors.

“We definitely were able to get in touch with people of a younger mindset who were wanting to get help and guidance and have a mentor. We were able to be that mentor for them,” Thuringer said.

Watkins had a conversation with a student who was at the Yakima cleanup last year, who noticed his photo during the showcase.

“Being able to simply walk by [and] pinpoint that you’ve been apart of something and you can also display the great impact that it had on you says a lot about the impact of the event as a whole,” Watkins said.

Dickerson is pleased to see students taking initiative in making their community a better place.

“Since I’ve been the director for [CLCE] what I’ve been the most proud of is the sense of pride and ownership students have in the campus and the community [along with] how much of an impact they actually have in serving,” Dickerson said.

According to Thuringer, the CLCE is just getting started. She said bigger and better things are ahead.

“I think that there’s always more networking, always more community outreach, volunteer opportunities that we can get CWU involved in,” Thuringer said.

Over the last year, the CLCE has shown that community services benefit both the people in which the volunteers serve and the volunteers.