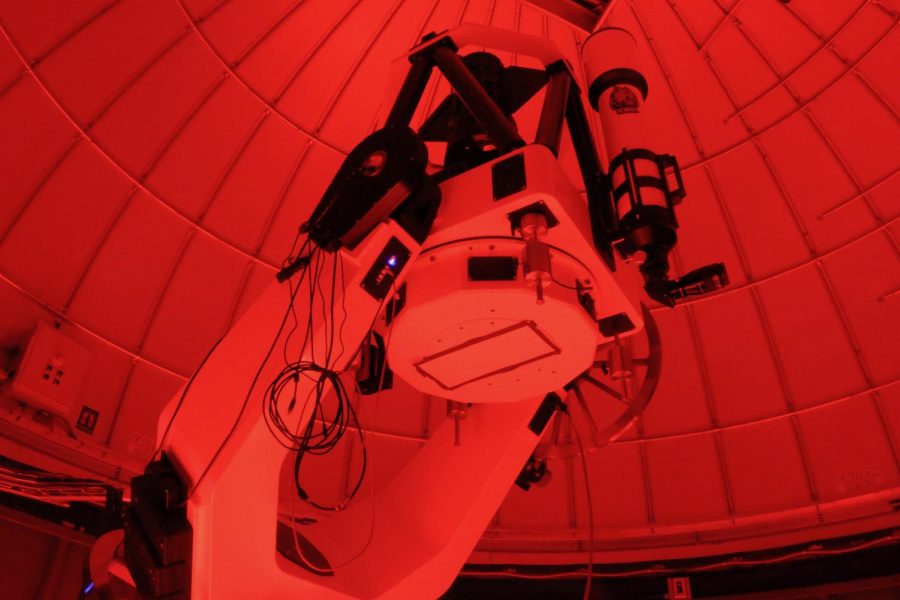 The CWU 0.6-meter research telescope droned loudly as the slit in its domed roof opened up to reveal the night sky. It was met with ooh’s and ah’s from the attendees of the Star Party event that took place on Oct. 8.

The Star Party, hosted by the CWU Astronomy Club, is a bimonthly event where anyone can come and learn about astronomy and stargazing.

A brief presentation at 8:30 p.m. inside the Lydig Planetarium is followed by questions, and the night ends with a trip to the rooftop of Discovery Hall, where attendees can stargaze with telescopes. According to posters, the Oct. 8 event had the theme, “Time Travel Fact vs. Fiction.”

Josh McRae is the president of the astronomy club and a junior majoring in physics with a specialization in biophysics.

McRae said, through the Star Parties, he wants attendees to be able to see the wonders of astronomy and space, even if they don’t have a background in astronomy.

“I want people to … be able to look up at the sky and see the significance of each individual star and be constantly curious and wonder about the things that are outside of our solar system and be able to have that desire to know more,” McRae said.

He presented to an audience of about 40 people the mystery and math behind time and the way the media portrays it in movies and TV shows, like “Doctor Who,” “Avengers: Endgame,” “The Time Traveler’s Wife” and “Hot Tub Time Machine.”

“Because time travel is such an abstract concept for a lot of reasons and in a lot of ways, you can really go into the mystical and the fantasies to really explore this concept,” McRae said.

McRae also delved deeper into the math and science behind time like Albert Einstein’s theory of relativity, and the Lorentz equation, a concept in the study of physics.

“In order to understand the reality of time travel, you have to understand how time progresses and how this relates to the speed of light,” McRae said.

After the presentation, astronomy professor Cassandra Fallscheer and McRae led the group to the roof of Discovery Hall, where telescopes of different sizes were set up.

It was a cold and windy night on top of the 85-foot building, with temperatures as low as 27 degrees Fahrenheit.

During the event, the clouds blocked the view of the stars, so people huddled inside the domed tower that houses the 0.6-meter research telescope and listened to Fallscheer’s presentation about the giant machine.

“What we’re doing with this telescope right now is we’re preparing it for research projects, to look for exoplanets … which are planets that are outside of the solar system,” Fallscheer said. “There are currently over 4,000 exoplanets in known existence.”

Fallscheer also explained that there is a control room on the fourth floor of the tower, right below the research telescope, where researchers can observe and remotely operate the telescope, even on a beach.

“I think the thing that blows my mind the most is Saturn,” Fallscheer said. “It is incredible to me that from here on earth, I can look with my own two eyes, actually one eye if I’m squinting through an eyepiece, and see the rings around that planet.”

Lucas Baker, a freshman majoring in biology and minoring in astronomy and music, first learned about astronomy through his dad’s telescope.

“It was a pretty cheap one, but I would mess around with it a lot,” Baker said.

Baker also said when he was in high school, there was a trend of galaxy-themed merchandise like galaxy-colored leggings, backpacks and phone cases, which made him want to learn more about it.

“And when I had the opportunity to take a class, I took it,” Baker said. “I loved it. My [astronomy] teacher was one of my favorite teachers in school.”

When asked about why he enjoys the subject, Baker answered, “Just the beauty of it all. If you look through a telescope and see the nebula, it’s just so beautiful.”

McRae said if anyone is interested in astronomy and stargazing but doesn’t have the equipment to do so, finding a group that has the resources, such as the astronomy club, is important.

The next Star Party is on Oct. 22 and upcoming ones are on the second and fourth Tuesday of November.