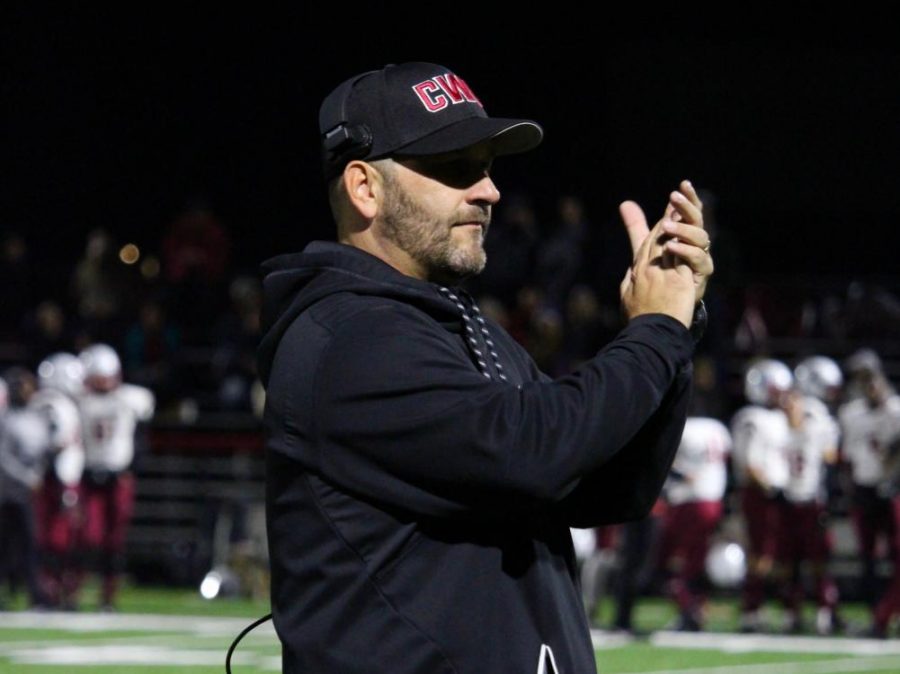 “I knew, maybe around the age of sixteen, that I wanted to be a football coach.”

Jim Koetter’s son, Dirk Koetter, was the offensive coordinator at the University of Missouri (UM) at the time. Dirk would occasionally show up to HHS’s football practices decked out in UM gear.

Fisk thought the life of a college football coach looked glamorous. What he didn’t see was the amount of time and effort that goes into the job.

Fisk’s coaching journey began just after graduating high school. He chose not to go to college right away, instead choosing to stick around and coach HHS’s varsity offensive line for the next two years. He went on to play four years of collegiate football, at the same time earning his degree in physical education.

Fisk, having graduated, went back to coach high school football for two years before moving to North Dakota to coach at the University of Mary.

“I had a two-year-old daughter and a six-month-old baby and we loaded up a U-haul and moved to Bismarck, North Dakota,” Fisk said.

In his initial years coaching the offensive line at the University of Mary, Fisk was living on $200 a month working to help support his family as well as his career.

Fisk spent nine years coaching at the University of Mary, initially coaching the offensive line before being promoted to offensive coordinator.

Life pulled Fisk’s family in a new direction when his wife Jessie got offered a job in Medford, Oregon. He resigned from his position as offensive coordinator and had no guarantee that he would be able to coach football again.

By a stroke of luck, the head coach at Southern Oregon University (SOU) was released around the time Fisk’s family made the move to Medford. Fisk applied but didn’t get the job, however, the new head coach brought Fisk on to coach the offense since he lived in the area.

Prior to arriving at CWU, Fisk already knew Wildcat football’s previous head coach Ian Shoemaker. Shoemaker was coaching at St. Cloud State University when Fisk coached at the University of Mary, and the teams played against each other.

At the 2016 National Coaching Convention, Shoemaker sought out Fisk to ask him if he knew anyone who could coach offensive line for CWU.

Fisk and his family arrived in Ellensburg in March of 2017. Being from a small town, both Fisk and Mrs. Fisk feel right at home. Fisk has two daughters, one who is a track and field athlete at CWU and another who is committed to CWU’s volleyball team once she graduates from Ellensburg High School.

“The good Lord blessed me with two daughters and no sons and I’ve got 100 sons on the football team. That’s how I view it,” Fisk said.

Since joining Wildcat Football’s coaching staff, Fisk has helped the offensive line and the offense as a whole improve dramatically. In 2017, Fisk’s offensive line was held as one of the nation’s best, allowing only 14 sacks in the duration of the season, according to the Wildcat Sports website. The offense was named 11th best in the nation, a leap of 100 spots in the national rankings since 2015.

Under Fisk, offensive lineman James Moore and Nicholas Streubel were both awarded First-Team All-GNAC. Later, Moore progressed to be named a D2CCA All-American, according to the Wildcat Sports website.

“He’s definitely he’s one of the best coaches I’ve ever had,” Streubel said. “He leads with an iron fist. He knows what direction he wants to take the program.”

Streubel said Fisk knows how to make a program run smoothly. He said Fisk brought in systems for the offensive line that were easy to understand and effective. Streubel said Fisk is a serious coach, but he also knows when to turn it down and help the players relax.

“It’s cool seeing him transition to [the head coach] role,” Streubel said. “He’s been ready for it for 10 years.”

Being the head coach is more difficult and complicated than Fisk imagined it would be. He didn’t realize what a grind the position would be, especially with the team having four losses on the season.

“As your an assistant coach, you support the head coach and you kind of think you know what being a head coach is all about, you don’t,” Fisk said.

On a day-to-day basis, Fisk is busy finding ways to motivate the team, keep the team together and manage group dynamics. On top of that, Fisk is responsible for coaching the offensive line, which he sees as one of the more difficult positions to coach, as well as coaching the punt team.

“It’s a lot, but it’s a labor of love,” Fisk said. “If you’re doing what you love, you’re never going to work a day in your life.”

Fisk spends a lot of time doing what he loves. He works around 66 hours Monday through Friday, 10 hours on game day and another 10-12 hours on Sundays. He also works on recruiting potential players for most of the year.

Fisk said as a football coach, you almost need to force yourself to go home, spend time with family, work out or just spend time on yourself. He said it can be tricky to find that balance.

Fisk said the best part of the head coach position is trying to build something. He has been through a notable number of football seasons and finds joy in the journey.