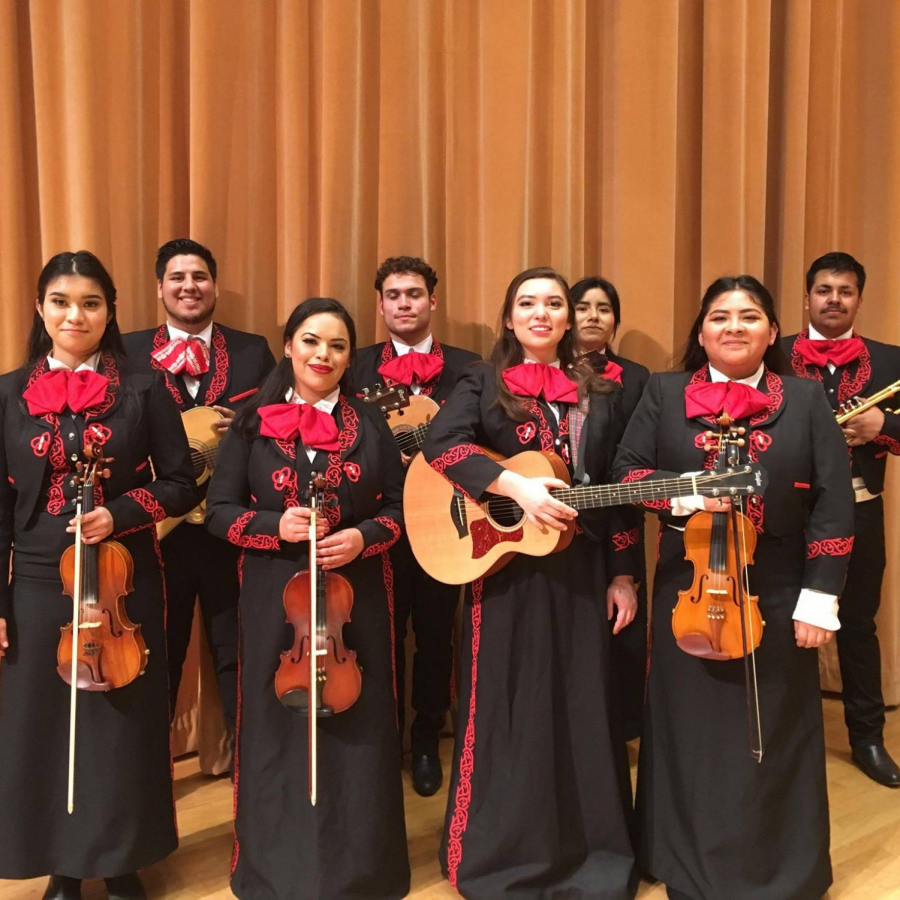 Music has created a powerful bond among the members of Mariachi del Centro. They encourage students who are curious about mariachi and Mexican culture to reach out and learn more.

Amongst the numerous clubs and organizations at CWU is a club filled with talented musicians, yet they aren’t all music majors. With their red and black charro suits and their unique instruments like the guitarrón or the trumpet, the CWU Mariachi del Centro Club showcases Mexican folk music. What makes this club so unique is just how close all the members are to one another.

Founded five years ago by CWU students Oscar Licon and Eduardo Ramirez, the club started with five members, and has since doubled in size. Anybody interested in the mariachi culture can join the club.

The club does not only consist of music majors. Some members are accounting, business and even actuarial science majors. According to Licon, background doesn’t matter. He said as long as you care about mariachi and have some musical background, you can join. The club even encourages those who may not be as musically inclined to reach out and get to know the culture more.

Licon and Ramirez founded the club with the idea of creating a place of belonging. Licon had been involved in mariachi groups since he was a kid. After receiving a scholarship from CWU for participating in a mariachi festival, Licon struggled to find a group to identify with when he first arrived at CWU. They eventually created the club as a response to this lack of feeling welcome.

“My freshman year I couldn’t identify with a lot of clubs, so I started my own,” Licon said. “It’s about creating a space of ‘Hey you belong here. If you come here, you’re a part of this group.’”

Licon believes that the greater presence of the club on campus through gigs and other events leads to more hope for potential Latinx students to come and feel welcome in Ellensburg.

“Coming to campus and seeing someone that looks like you…that can really impact your way of looking at higher education,” Licon said.

When it came to events like Wildcat Day, Licon said, “Latino parents like [our performances] because they know that [CWU] supports Latinos. They can be a part of this club that represents them.”

Many individual members have their own personal reasons for being a part of the club. For Daniel Cedeno, he appreciates the cultural and historical impact of mariachi, but in particular the uniform they wear, the charro, when they perform.

“It’s like wherever you go, it’ll always be there. You’re taking a little bit of Mexico wherever you go,” Cedeno said. “When we wear the uniform, we’re representing the whole country. It’s symbolic.”

He also appreciates the fact that many Mexican adults in the United States have a deep-rooted connection with the mariachi sound.

“The music brings back memories to the parents and to the grandparents,” Cedeno said. “Some of the parents have even cried. They haven’t been in Mexico in so many years and to hear that music again, they feel like they are at home.”

For others, like Pilar Cuevas, mariachi gives her the strength and confidence to uplift her life from her childhood struggles.

“When I put on the charro suit, I feel like I can express myself more,” Cuevas said. “Back then I hadn’t really found myself. Mariachi really helped me get out of that.”

“My sister went through the same thing,” Castorene said. Her sister participates in the University of Washington’s mariachi club.

“It gave her a sense of community and gave her family she doesn’t have. Our family [lives] far away and you’re in college. With mariachi you have all these people you’re always around to bond with,” Castorene said.

Outside of regular practices and performances, the club constantly meets as a form of bonding. Whether it’s at a barbecue at a band member’s house or at a retreat, usually planned by Cedeno, this group maintains a strong bond that is more resemblant of a family than a club or friend group.

They practice twice a week for two hours each day. The club performs at numerous events throughout the school year, including the Dia de los Muertos event and most recently at the College of Arts and Humanities Awards Banquet. They are currently preparing for the first ever CWU Mariachi Festival, held in the SURC Theater on May 24 at 5 p.m. The club encourages all CWU students and faculty to come and enjoy the festival, which will feature traditional Mexican folk songs and as well as music from other mariachi groups. If you want to join the group, message them on Facebook.