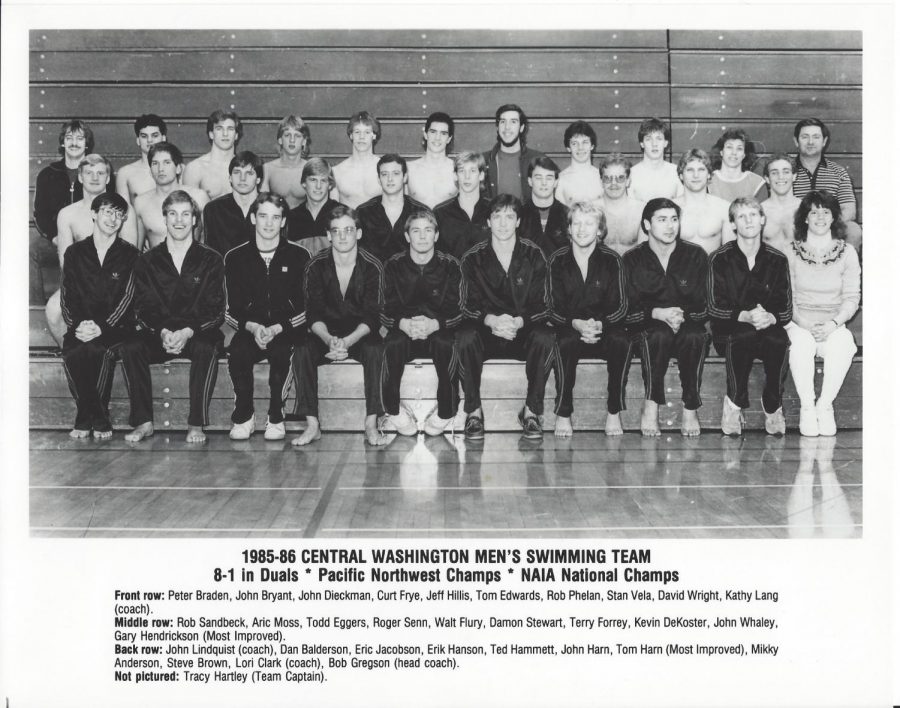 National champions Krissy Tandle-Richerson, Russell Ferguson and the 1986 Men’s Swimming Team have been chosen as the newest editions to CWU’s Athletic Hall of Fame. Athletics will celebrate their achievements during their time here on May 18 as part of the 36th Hall of Fame induction ceremony.

According to Athletic Director Dennis Francois, Krissy Tandle-Richerson competed in shot put for the Women’s Track and Field Team and is a four-time GNAC champion. He said that Tandle-Richerson became the first CWU student-athlete to win a NCAA DII national championship in 2009, and remains the only Wildcat to hold the title to date.

Tandle-Richerson competed in indoor shot put at the NCAA Division II Winter Sports Festival in Houston, Texas and won with a 14.87 meter throw, according to a March 26 CWU press release. It also said she beat the second place competitor by nearly a foot.

Francois said Ferguson was a 23-time All-American and that after he won the national title in 1977, CWU’s Swim Team became dominant in the 100-meter breaststroke as well as other events. They won national titles for every year from 1984-89.

Hall of Fame inductees can not be nominated for at least 10 years after their college career comes to an end, according to Francois. Krissy Tandle-Richerson, who won nationals in 2009, is being inducted right at that ten-year mark.

“It’s really nice when we recognize these people that have achieved such high accomplishments during their time here, and doing that literally the first year they’re eligible,” Francois said.

Francois said the Hall of Fame Committee has been working hard to go through records and looking at national champions and championship teams.

“When you achieve at that level, the best in the nation at your sport or your event, it deserves that recognition in my view,” Francois said.

The Hall of Fame Committee has implemented specialty awards over the past three years, according to Francois. He said these awards include titles like the Trailblazer Award, the Spirit of Central Award and the Distinguished Alumni Award. Francois said the awards celebrate more than athletic achievements and are considered to be full-fledged Hall of Fame awards.

The Hall of Fame inductions begin with a social at the President’s University House. Francois said the purpose of the social is to give the inductees some time to relax and socialize so they aren’t thrown into the proceedings right away.

Doors open to the main event at 5 p.m. at the SURC Ballroom. According to Francois, the event will feature a hosted bar, as well as a silent auction and live auctions. He said the proceeds from the auctions will go towards student athlete scholarships and the cost of the event.

Francois said the silent auction will include items like restaurant gift certificates, baseball tickets, wine packages and more. He said the proceeds will go to the Hall of Fame Endowment Scholarship.

The live auctions will feature a live auctioneer and multiple packages, according to Francois. Some of the packages going up for auction are a tour and dinner for eight at Ellensburg Brewery, Mariner diamond club tickets and an expenses-paid trip to San Francisco, which includes access to the Philadelphia Phillies on-field batting practice. Another package offered is a day with the Grant County Sheriff’s Department, where up to four people will be able to experience the department’s driving course and will have the chance to fire different weapons at their firing range. Francois said that half the proceeds from the Sheriff’s package will go towards a memorial scholarship in recognition of the late Deputy Ryan Thompson’s service.

The induction ceremonies include an introduction of the inductees’ achievements at CWU, followed by a 15-minute acceptance speech. According to Francois, the speeches can get emotional and people often get choked up.

“It’s so nice to see those people in some of their proudest moments,” Francois said. “For most of them, to a T, it’s probably the best time of their lives.