AJ Wood winds up and brings it home

AJ Wood to play summer baseball for the Yakima Pippins 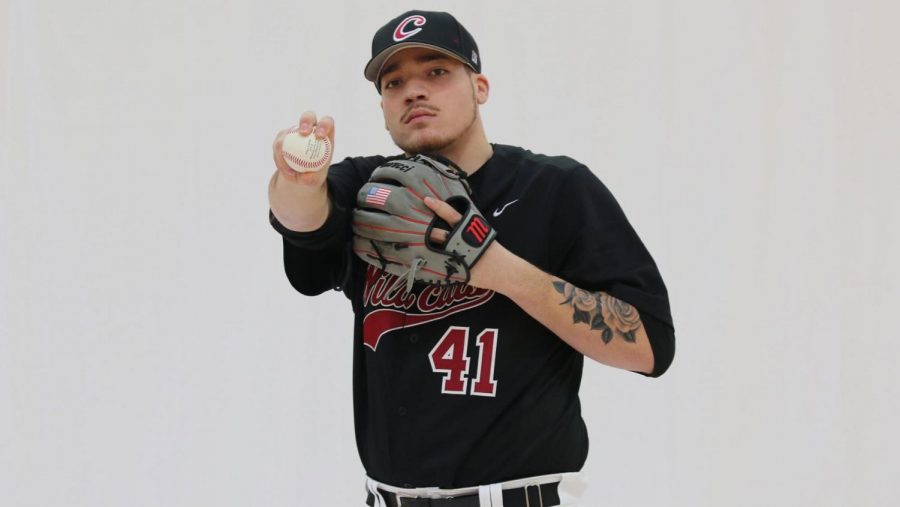 If you don’t know who junior AJ Wood is, then you should remember the name. Wood is a pitcher for CWU Baseball, and according to his teammates and coaches, he is a stand out player, and human being.

Wood attended C.K. McClatchy High School in Sacramento, California. He did not have his father around much growing up so his mother was the one looking after him, which, according to Wood, is why they have such a close relationship. Wood has one sister who is two years older than him and was a college athlete as well, playing soccer at Chico State University. Wood also has a half brother who graduated from the University of California Los Angeles. Wood also has a step sister who is two years old. Finally Wood has a nephew who does not have a father figure in his life, and Wood has taken over as the father figure in his nephew’s life. His nephew looks up to him and Wood said that his nephew is already an athlete.

“He loves sports already. I’m trying to push him into baseball, but he is really into soccer, sad to say,” Wood said.

Wood, growing up in a single parent household, and not living in the greatest neighborhood, said that he didn’t surround himself with the best types of people. Wood said he wasn’t doing the best things and was living the street life.

“Baseball has been an out for me. Like I said I didn’t have the greatest friends growing up, but baseball was my outside life from real life,” Wood said. “I love to be on the field between the lines, and I love to be the All-Star on the field. I always give it my all.”

Wood was a three sport athlete playing football, basketball and baseball. Football was Wood’s main sport throughout high school. He played as both a defensive end and a tight end. Wood was able to get a handful of college football offers, but his senior year he tore his left labrum and decided to take the baseball route. Wood ended up getting C.K. McClatchy’s Male Athlete of the Year in 2016 which helped him get collegiate baseball offers. Right off the bat, Wood took his first offer to go play baseball at Oregon Institute of Technology. After one year, Wood transferred back to his home state of California to play baseball. After a good year there he decided to transfer up north to play for CWU.

According sophomore Mitch Lesmeister, Wood has always been known as the guy on the team to make things relaxed and enjoyable. Wood’s teammates feel that he is one of the funniest guys on the team, and there is never a dull moment when it comes to Wood. They also said always has their backs.

For Lesmeister, this was his first year playing with Wood. Lesmeister said that the role Wood plays is extremely important to the team’s dynamic.

Wood said that his main goal was to make it to the big leagues, and he is now giving up on that dream. According to Wood a scout for the Yakima Pippins, a semi-pro baseball team, has been at CWU baseball games, and liked what he saw out of Wood. Wood has been offered the chance to play this summer with the Pippins. Wood started out his career as a first baseman but when there weren’t any spots open at first base his freshman year the coaches said he could pitch. Wood jumped on the opportunity and taught himself how to pitch. He watched videos on YouTube on how to throw different pitches.

Standing at 6-foot-3 and weighing in around 220 pounds, Wood tops out at around 93 mph, but averages about 91 mph. According to Wood, if you want to be in the big leagues, you have to throw harder, or you have to be able to throw pitches that are off speed to get other players out. Wood decided that he would be a sinker ball pitcher, which is an out pitch. That mentality has worked well for him as a pitcher at CWU.

According to the CWU Athletics website, Wood’s opponents have only hit .228 batting average off of him this past season. He has struggled a bit with his command. Wood said coaches at the next level know that if he can fix that, he has a lot of potential as a pitcher. Head coach Desi Storey played a key role in recruiting Wood to come to CWU.

“AJ is a great guy. Very competitive, wants success for himself and his teammates,” Storey said. “He is a very likeable person and a very social person.”