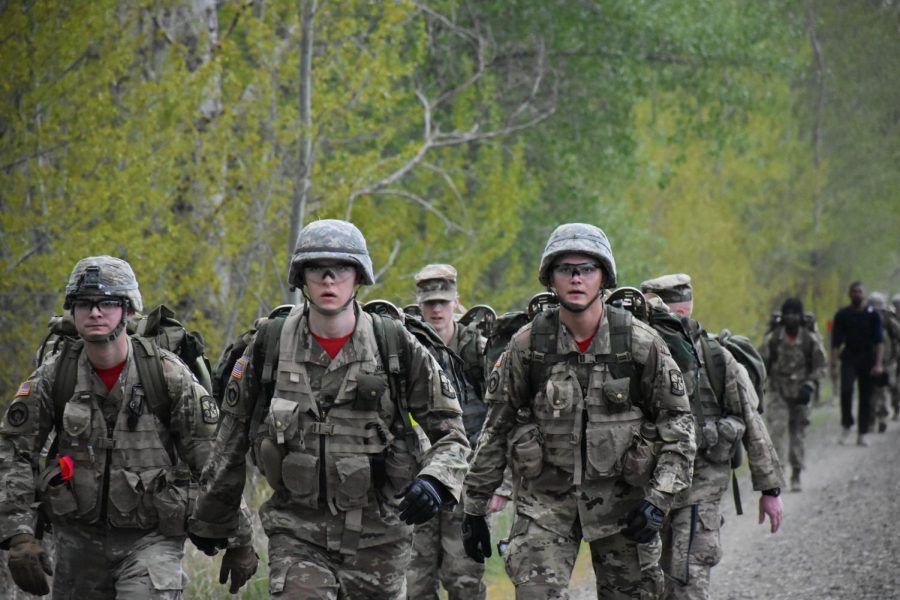 The John Wayne Trail hike is one of the methods ROTC uses to help cadets stay in combat-ready shape. Cadets must trek six miles with 30-40 pound backpacks.

It’s still dark, but the sun has just begun to rise over the hills of Kittitas county. It’s 5:45 a.m. and Army ROTC cadets arrive at the John Wayne Trail next to the Ellensburg fairgrounds. Cadet soldiers line up with their 30 to 40 pound packs on their backs and in full gear ready to take on the six mile hike.

This is something that ROTC is familiar with, as they do these physical activities on the regular to stay ready as a soldier at all times, according to Cadet Joshua Chinco. Chinco is certified as a Master of Fitness, or in other words an expert in fitness, according to the Army’s website. Chinco, Cadet Madison Woodworth and Cadet Emanuel Sanchez tell their idea of what they believe is a perfect soldier, and give insight into how they stay in combat ready shape.

Being combat ready is something that every soldier has to do because it is their job and duty, according to Army’s website. Since 1980, the U.S. Army has used the Army physical fitness test (APFT). The Army is now changing how they measure soldiers ability to perform physically to the Army combat fitness test (ACFT), which aims to cut down injuries. The ACFT will also measure all soldiers, female and male, with one even score across the board. The ACFT will measure soldiers on five components: muscular and aerobic endurance, muscular strength, speed, agility and explosive power. The APFT has only measured the first two components, according to Army’s website.

“If you want to talk about what the army can improve upon now, I think that they are accomplishing that by bringing in the new ACFT,” Chinco said.

Chinco said the Army doesn’t expect its soldiers to be amazing at one thing, but they need to be good at everything.

Woodworth expressed her feeling on the difference between a male soldier and a female soldier. According to the Army’s website, in 2017 the Army started integrating female soldiers into infantry roles.

“The ideal female soldier is not any different than the ideal male soldier,” Woodworth said. “I think that the perfect soldier is someone who is never satisfied and is always willing to change.”

The views and opinions expressed by any person in this article do not represent the views of the United States Army.