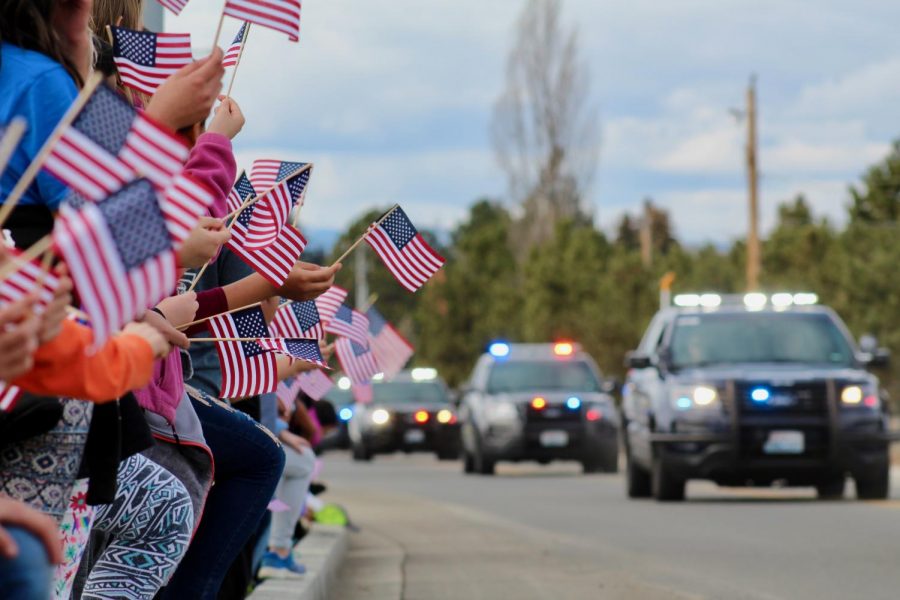 Students from Valley View Elementary stood silently on the sidewalks as the procession for Deputy Ryan Thompson passed by. Many students held American flags.

Hundreds of people from across the country and beyond came to Ellensburg March 28 to celebrate the life and support the family of one of their own. Deputy Ryan Thompson of the Kittitas County Sheriff’s Office was killed in a shootout with a suspect on March 19. Thompson graduated from CWU in 2003 where on Thursday his memorial service was attended by over 2,500 people.

Hundreds of police vehicles from across the country participated in the procession that left Steward and Williams Funeral Home in downtown Ellensburg at 12:20 p.m. It made its way under an American flag held aloft by two Kittitas Valley Fire and Rescue trucks, and arrived at Nicholson Pavilion where officers and civilians were lined up along the sidewalk to pay their respects. Police officers from Seattle and Spokane to New York, Dallas and British Columbia all saluted one of their fallen brothers silently.

According to Public Information Officer (PIO) Kyle Foreman of the Grant County Sheriff’s Office, the risk of getting hurt or killed is always on an officer’s mind. Foreman has participated in about 15 memorial services like this one during his career with fire departments and law enforcement.

“When a law enforcement officer dies, it is felt across the country as well as that community where the officer was lost, and out of respect for that officer, that officer’s family and the survivors, law enforcement will come together in support,” Foreman said. “Deputy Thompson was a part of the community, whether he was investigating a call or just stopping by an espresso stand to get coffee or just chatting with someone on the street, he was a fixture here. Just like when any family loses a family member, this community is gathering for one of ours.”

Bill Hunt, the law enforcement chaplain, gave the service’s invocation. He knew Thompson well and even shared a story of an inmate who told him: “I heard Deputy Thompson was killed. He was the nicest cop who ever arrested me, I’m sorry for your loss.”

Thompson’s warmth, relaxed sensibilities and sense of humor were all spoken about fondly by those who spoke during the remembrances section of the memorial. Many mentioned “Thompson Time,” in reference to Thompson’s easy-going view of punctuality. Matthew Stroe, who grew up and went through the same police academy class with Thompson, talked about how Thompson would keep him and his roommates well-fed and would give hugs that would morph into Thompson taking his friends down like a wrestler.

“I would love to have one more hug from Ryan, even if it turns into a wrestling match,” Stroe said.

Not all who came to the memorial service knew Thompson personally. Sgt. Kevin Lynch and Sgt. Jeremy Orenstein are both officers from the New York Police Department and members of Brotherhood for the Fallen. There are over 500 officers in the New York chapter alone according to Lynch, who is attending his 10th memorial service for a fellow officer.

“Distance doesn’t matter, we all have the same job,” Lynch said. “He’s one of us and the only thing we can do now is be there to support his family.”

Brotherhood for the Fallen has chapters all over the country and donated $1000 to Thompson’s family as they do for all fallen officers. It is one of many organizations set up to honor and support the families of police officers who are killed in the line of duty.

Corporal Kyle Nelson of the Bellingham Police Department is a member of the Behind the Badge Foundation which is made up of officers and civilians, many of which are also surviving family members of fallen officers. In addition to gathering officers to support the families of fallen officers at their memorial services, the Behind the Badge Foundation also maintains the Washington State Law Enforcement Memorial Wall on the state capitol campus.

“They’ll continue to walk with the family even after today’s event because the trauma continues for them,” said Nelson.

Towards the end of the service, members of the audience sat in silence as they respectfully gave time for Deputy Thompson’s family to gather privately outside of Nicholson Pavilion. The silence was broken to give spontaneous applause for Officer Benito Chavez, who was wounded in the leg during the gunfight that killed Thompson, as he left in a stretcher.

One of the last parts of the service came over the intercom of the auditorium: a radio message from the Kittitas County Sheriff’s Office dispatch.

“Godspeed Deputy Thompson,” the voice said to the silent audience. “We have the watch from here.”