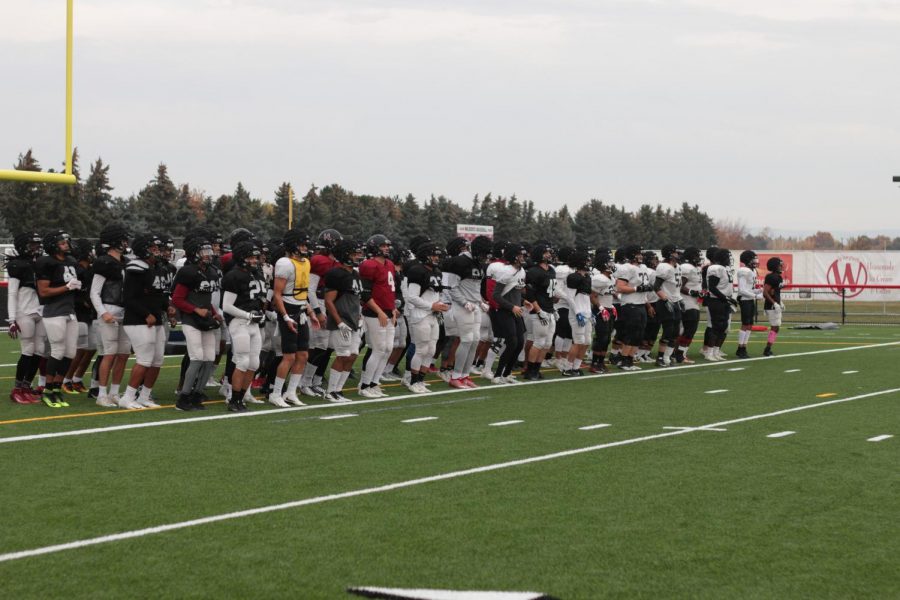 CWU spring football practices will begin April 5. Practices are open to the public and the spring game will take place on May 4, starting at 3 p.m.

Wildcat football is about to kick off spring training. Practice will begin April 5, with two scrimmages throughout spring, ending with a spring game on May 4, according to press release on wildcatsports.com.

CWU Football head coach Chris Fisk said that the goals the team aims to reach this spring is to learn the new system that comes with the introduction of new coaches and leadership among the players. He said they want to push the level of investment in the program as they try to strengthen the bond of the team.

Fisk said the coaches have been implementing changes in schematics, the way they practice and drill, since winter conditioning began, and will continue to do so as they move into spring.

“I think for players, change is hard. So you have to be smart about how many changes you make and the rate at which you try to apply change,” Fisk said.

Fisk said that since he and the previous head coach Ian Shoemaker come from similar coaching backgrounds, there shouldn’t be a huge shift in the philosophies that the team operates on. He said that the biggest change separating his coaching style from Shoemaker’s is that he prefers to emphasize a tempo style offense. Tempo style is a strategy in which the offensive shortens the time between each play, forcing the defense to react faster.

According to Fisk, the biggest changes will come from the hiring of  Kelly Bills, offensive coordinator and quarterbacks coach. Bills is coming over from FCS Division I Weber State University, where he brought the team to the FCS playoffs three times and two Big Sky Championships in his three years.

“We’re excited to take some of the things he’s done at his stops, and implement them into our offense,” Fisk said.

Fisk said he doesn’t think anything that happened in the previous season will have a bearing in the next. He said much has changed in terms of new offensive staff and the experience of the defensive staff. Those changes will be reflected in the upcoming season.

According to Fisk, the biggest change this year as far as positions go will be a battle for the starting Quarterback (QB) title, as they will be losing QB Reilly Hennessey. Hennessey has been signed to the Parma Panthers from the Italian Football League, according to the Daily Record.

Fisk said that some of the candidates for QB include freshmen Canon Racanelli, Tai-John Mizutani and Christian Moore. He said that the fight for that spot is likely going to be the most notable challenge going into fall camp.

Fisk said that they will not be putting a timeline on when the new QB will be chosen. He said one of the questions he is asked is who he will have as QB, but he doesn’t believe in dealing in absolutes.

“It’s exciting because I think all of them are just outstanding persons. They’re just unbelievable people,” Fisk said.

Spring practices will generally be held on Tuesdays, Thursdays and Saturdays, and will consist of position meetings followed by on-field practice, according to Fisk. The schedule is available on wildcatsports.com It states that all practices will be open to the public.

Fisk said that the level of physical contact in practice will progress from two helmet-only practices with little or no contact, followed by two more practices in helmets and shoulder pads, also with minimal contact. They will beginning hitting live on the fifth practice  as mandated by the National Collegiate Athletic Association (NCAA). He said that the NCAA is regulating and monitoring contact more than in previous years.

Players get different levels of academic monitoring based on their current and past performance, according to Fisk. He said that players are placed in different groups, an at-risk group, middle-of-the-road and a non-risk group. Each group has correlating amounts of freedom from how much they need to be monitored.

For those who need their fix of CWU football, the spring game is happening on May 4. Fisk said they put on the spring game to celebrate the hard work the team has put in since January. He said they always try to tie in a young kids’ football camp to get the community involved. Fisk said that even if everyone watching doesn’t necessarily know what’s going on in the game, he likes the social aspect of the event. Fisk said that it gives people a chance to come together, converse, and it’s a great excuse to do some tailgating.