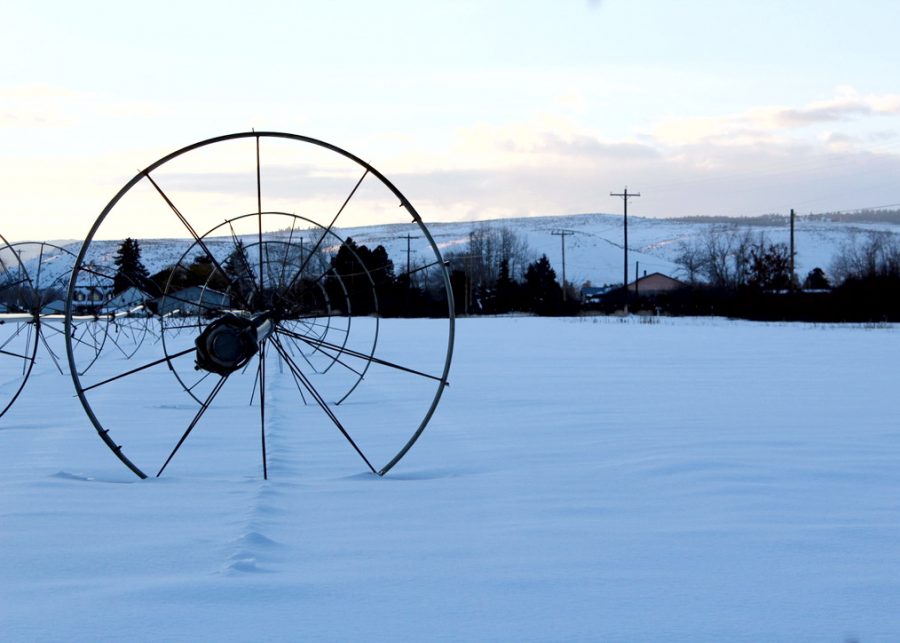 Wheel lines are used to irrigate pastures in preparation for growing seasons. During the winter they stand idle.

Hay and grain exporters in and around Kittitas County are attempting to cut processing costs by skipping fumigation of their timothy hay. According to the Organization of Kittitas County Timothy Hay Growers and Supplies President Carl Jensvold, growers and processors in Ellensburg are concerned that this is creating an uneven playing field regarding trade competitiveness and could damage trade relations with Japanese importers.

Fumigation is the process of introducing chemicals to disinfect an area, or in this case, a container full of hay. According to Jensvold, the reason hay processors in the area fumigate their timothy hay goes back to the 1970s when Japan put a hold on imported hay because of a particularly damaging insect, the hessian fly.

According to a Canadian study of the hessian fly, it is native to North America and uses cereal plants like wheat, barley, and rice as hosts for its larvae. The larvae migrate to the base of the plant and sap its nutrients.

According to Jensvold, hay exports infested with the pest caused Japanese importers to put a hold on incoming hay shipments and later impose a quarantine rule that stated that all hay imports needed to be fumigated.

Brad Habermann with Number 9 Hay said skipping fumigation saves processors about 5 percent of the cost per ton of hay. He said that he believes the processors who are trying to bring the cost down are mainly newer and smaller companies in the Columbian Basin. This cost is higher in the winter, because the containers must also be heated. He said that part of the reason they are doing this is that they haven’t been around long enough to understand the potential risks, and that cutting their costs allows them to get into the highly established market.

“Pretty much everyone in Ellensburg follows that protocol, and it adds more cost to the price by the time it reaches [the] end customer, and the guys who aren’t doing it are able to sell their hay cheaper,” Haberman said.

Wesco President Bruce Grow said that fumigating is something Ellensburg timothy hay processors agreed to do decades ago. He said the issue with some processors bypassing the process is troublesome for two reasons.

“For companies not to do that [fumigate], not only does it not have a level playing field business wise and price wise, but it puts the organizations at risk. If they are not careful, they suddenly introduce doubt or concern on the Japanese side of receiving product that isn’t fumigated,” Grow said.

Jensvold said that losing hay trade relations with Japan is a risk to the local economy. He said that the hay industry brings in roughly $40 million annually and losing that could have trickle-down effects that range from farm workers losing their jobs to the cease of farmers and processors buying vehicles and equipment.

According to Jensvold, there are about 30,000 acres of hay fields in Kittitas Valley. He said that there are other states in the U.S. that grow hay, but it’s mainly for domestic use. According to him, a large part of the industry’s success over the years can be attributed to Japanese importers.

Both Haberman and Grow said that their companies export about 60 percent of their hay crop to Japan. They said that they also export to places like Korea, Taiwan and the Middle East.

Jensvold said that the bulk of hay farming occurs on the west coast, and that locally there has been growth in the industry due to new processors trying to break into the market.

In response to the fumigation issue, both Haberman and Grow said they are having talks with the USDA about those who aren’t following protocol. Haberman said they have also been reaching out to the processors that aren’t complying to discuss the issue.

“We, along with others, are reaching out the USDA, to make sure they are aware of the volume that is now increasing with additional exporters who are not following the protocol. They are protecting that relationship and protecting the image of Washington and Pacific Northwest hay going to Japan,” Grow said.