Open Mic Nights aren’t for everybody 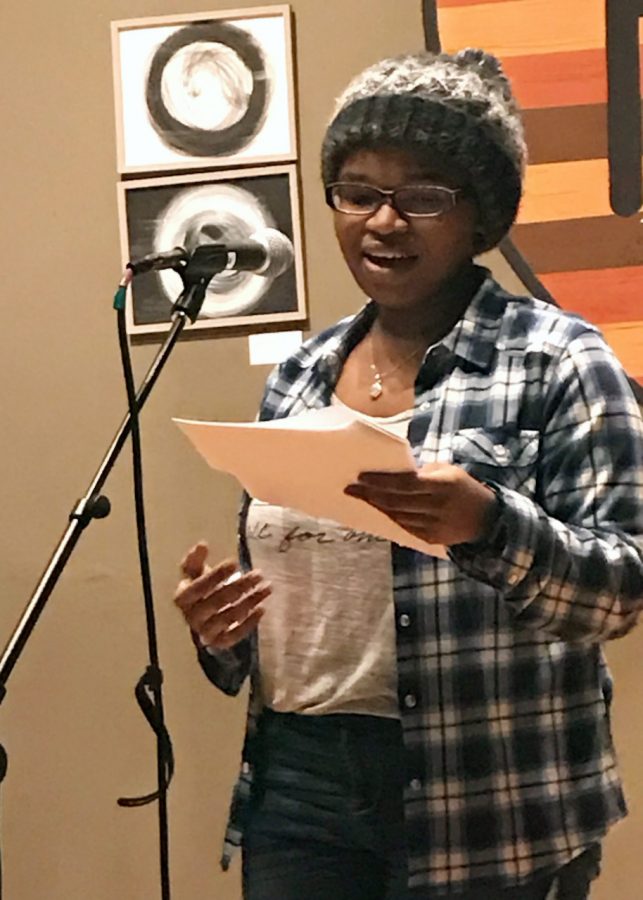 TyYonna Kitchen performed the poem, “Take a Bow” at the Open Mic Night at The Porch on Feb. 13.

On Feb. 14 there was an epic talent battle to the death at one of Ellensburg’s restaurants, The Porch. 10 contestants entered and everyone ended up surviving, but there were a few bruised egos by the end of the night. The bloodbath ended with four winners while everyone else was offered free consolation bubbles. There was even the added bonus of no real deaths occurring at The Porch.

As one of the lucky surviving performers (but not one of the  winners), I have become assured of one thing: I am now an expert on talent battles and open mic nights. As a professional, I must relay my knowledge to people who neither asked for this information nor knew that I existed.

You should probably choose and practice your act before you step foot into the building where the open mic night or talent battle is being held. Even if you wrote or produced your piece yourself, it’s a good idea to know what you want to say once you get on stage.

This next tip is for my fellow poets or anyone else who shares written work; reading from a paper copy of your writing can get complicated. One potential complication is that pages can get stuck together, which may put an awkward wrench in your performance. As a professional who speaks from experience, you should know that it is highly recommended that you either memorize your work or read from your phone. Memorization may seem like a lot of work for a single night, but it is an easy way to impress an audience. However, not everyone can dedicate time to memorizing their own work because some may have class or even homework if we are lucky.

I would also like to suggest that anyone entering the bloodthirsty arena that is an open mic night be ready to be received with relatively open arms. Performing in front of strangers can sound like a terrifying risk. In movies people can be booed off stage as they are pelted by rotting tomatoes. However, even in the talent battle to the death, no contestant left with hurt feelings unless they made jokes about dead babies, and even that guy made it back to his seat safely. Open mic nights offer people a safe space to show off their talents without any intense feelings of impending doom.

One last word of wisdom from an open mic night master: some things just don’t work for everyone. People should be aware of the fact that sometimes trying something once is more than enough. Not everyone who has a talent wants to perform for the masses. Just watching the performances would have been fun enough for someone like me, but it was nice trying something new for that night. Open mic nights aren’t just a safe haven for performers, they are also a night of usually family-friendly fun for audience members.

By the end of the night, the crowd cheered for their friends and cheered on first-time performers like me. With the promise of happy hour priced food and drinks and free bubbles I can easily say that the night was a success. The event was not so much about me winning a prize as much as it was a break from school work, an excuse to abandon SURC food and a night of fun with a few friends.

This open mic night was hosted by CWU’s very own Champagne Ryder who hopes to make this a regular event. For now, students can get their open mic night kicks from Campus Activities’ Open Mic Night on Feb. 21 at 8 p.m. Signups begin at 7:30 p.m.