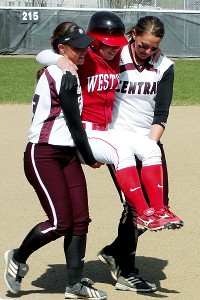 It’s 2008 at Gary and Bobbi Frederick Field in Ellensburg, Washington, as the top two softball teams, Western Oregon University (WOU) and CWU, are battling it out for the GNAC Championship. The Wildcats are down with WOU senior outfielder Sara Bradley (née Tucholsky) up to the plate. Bradley swings, connecting with the core of the bat, sending the ball deep to center field. As Bradley rounds first, she watches the ball soar over the fence, but in doing so, she misses first base. Bradley glances towards her first base coach telling her to come back and touch first base. As Bradley turns around to come back, something terrible happens. A rush of pain enters Bradley’s body as she falls to the ground. She has just torn her ACL. As Bradley lays in the dirt crying out in pain, the game comes to a standstill. College rules imply that a team cannot touch their own player. Mallory Holtman-Fletcher, a senior first baseman at CWU, runs to the umpire with an idea.

“I asked if I could carry Sara around the bases,” Holtman-Fletcher said. “We talked about it for awhile and then they said yes.”

Holtman-Fletcher looks to CWU junior shortstop Liz Wallace, who is nearest to her, and they pick up Bradley. Wallace and Holtman-Fletcher touch Bradley down on first, second, third and then finally home plate, where Bradley’s teammates awaited a home run celebration. Everyone present at the game cheered on the situation as an act of kindness.

“I never thought anything of it at the time,” Holtman-Fletcher said. “But I knew it had picked up steam when ESPN was contacting our athletic director.”

A video taken from the stands and word of mouth had brought a huge amount of attention to the situation. All three players were flown out to the MLB All-Star game at the old Yankee Stadium and honored at different events for their actions on the field.

The Excellence in Sports Performance Yearly (ESPY) Award is the sports world’s most prestigious award show. Bradley, Holtman-Fletcher and Wallace were nominated for “Best Moment” in 2008. Just getting nominated was a big achievement.

“I don’t think I ever thought we would win,” Bradley said. “I think I was just so happy to be there and have all of these great experiences.”

It was clear that even if they did not win the Best Moment Award, they had made an impact on the world of sports.

The time had come to present the 2008 Best Moment Award and against every other moment, Bradley, Wallace and Holtman-Fletcher’s got chosen as the winner. Three girls from small universities that just felt they should help out a fellow player in need. When Holtman-Fletcher and Wallace decided to carry Bradley, they had made the decision that winning isn’t everything. They felt Bradley deserved to finish rounding the bases. This display of sportsmanship reached one of the highest stages in sports, and ultimately became an empowering moment for the whole nation to appreciate.

Holtman-Fletcher explained that the moment was even more powerful because it was awarded at a time when sportsmanship was being questioned in all sports at all different levels. It showed the power of humans and the ability to think about others even in the face of competitive sports.

“We never even second guessed it,” Wallace said. “We just wanted to do the right thing in that moment.”

It didn’t just show athletes that doing the right thing was important, it showed little kids who were growing up and playing sports the true meaning of sportsmanship. This moment showed future generations that selflessness and competition can go hand-in-hand no matter whose side you’re on. This wasn’t just an example for sports, it was an example for life. Holtman-Fletcher and Wallace didn’t need to do what they did. They just acted in kindness.

Their story was inspirational to everyone who had ever faced adversity and needed someone to reach out their hand to help them out.

“I was proud to be there with Mallory and Liz,” Bradley said.

Today, almost 11 years later, all three of their lives have changed in remarkable ways. Holtman-Fletcher spent the next five years, after graduating, as a coach for CWU softball and is now married with a son. Holtman-Fletcher keeps her ESPY award on a mantle in her home in North Carolina, but beyond that, she is most proud of being inducted into CWU’s Hall of Fame as the first and only softball player. Holtman-Fletcher was a standout softball player from her childhood all the way through college and is proud of all the work she put in to get there. She wanted to make it clear that she was inducted into the Hall of Fame for her hard work on and off the field, not for her ESPY. Holtman-Fletcher’s son doesn’t understand why she got the ESPY award, just the fact that his mom carried someone around the bases.

Holtman-Fletcher still plays slow pitch every once in a while with her husband and still loves the game, but now has a family to focus on. Her son is her priority and she wants to make sure she is there for all of his best moments.

“The only reason I quit coaching was to be able to do it for my son,” Holtman-Fletcher said. “I want to make sure I’m there for my son and can watch him grow up.”

Bradley now lives in Portland, Oregon and is married with a son. She feels like she has a duty to continue this story, even after it has faded over time, as a way of passing on the kindness. She keeps her ESPY on a shelf in her house as a reminder that she has an obligation to share her story.

“It taught me that there is a lot of good in people,” Bradley said.

Wallace has since moved around a lot as her husband is in the Navy. She now lives in Virginia with her husband and two kids. Wallace enjoys still hearing from parents about how inspirational their moment was on the field. Her life is all about her kids and knowing she has made a difference is very humbling.

“Eventually we got this big stack of letters from even kindergartners saying how proud they were and that just meant so much to me,” Wallace said.

Their kids are now the most important part of their lives. Wallace believes the moment means so much more to her now because she knows that one day, her kids will have their own best moment to share with the world. There is great representation of the good in people behind their story and it is nice to be reminded of the home run that scored more than just runs on the field. It scored a ton of points in our hearts.