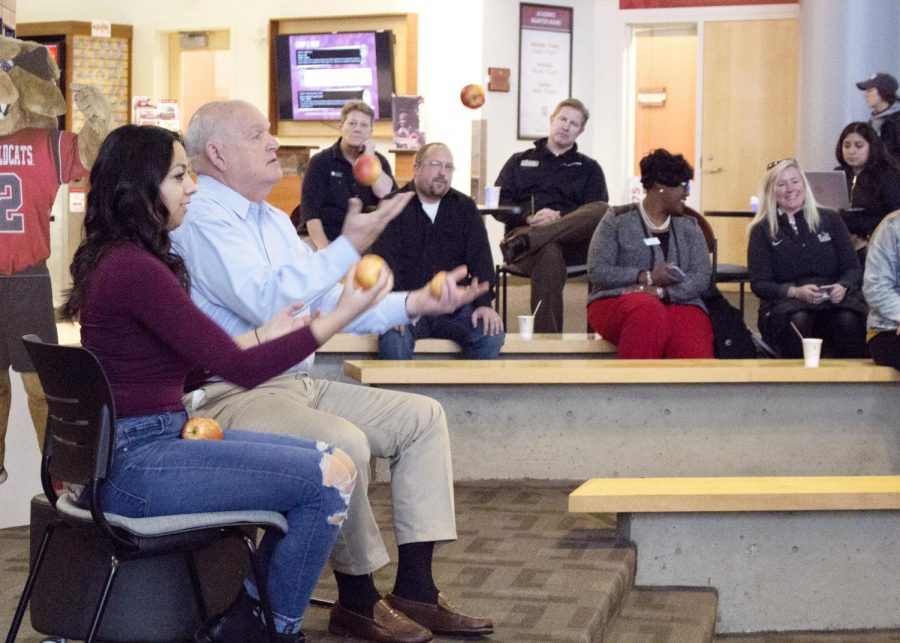 It’s difficult to imagine the presidents of our university juggling side by side, or attempting to come up with “dad jokes” in front of an audience, but that’s exactly what an audience witnessed on Tuesday. Students and faculty got the chance to see a different side of their student body and university presidents at 11 a.m. on Jan 8 as part of CWU’s first “Coffee with Presidents.” The event featured CWU President James Gaudino as well as ASCWU Student Body President Edith Rojas, mediated by ASCWU Vice President of Student Life and Facilities Jocelyn Matheny.

On Nov. 29, Rojas tweeted a poll asking what students would like to see her and Gaudino attempt to do. The top answer was a handstand, which Gaudino swiftly vetoed. Instead, they attempted everything else on the list which included juggling, dad jokes and drawing the CWU mascot.

The two presidents sat down in the SURC Pit and answered questions ranging from what their favorite movies are to what they would change about their lives if they could. Gaudino said they wanted to keep things light and humorous, using the time as an icebreaker for those who had never met the presidents.

“Everybody thinks the president is kind of a stuffy old academic who smokes a pipe and wears patches on his sleeves, and we’re not,” Gaudino said.

Gaudino said that informal meet and greet type events such as this are important for the students as well as the administration. He explained that most of the students he connects with are “engage” students, meaning students who are working closely with administrators such as club leaders and those involved in student government, etc. He said events like this are a great way of connecting with the “average” student who otherwise may never come in contact with the administrators.

According to Rojas, the idea for Coffee with Presidents stemmed from a similar event hosted at Washington State University (WSU). She said that WSU’s version is more of a hangout session than a Q&A, and she wanted to put her own twist on the event. Rojas explained that she wanted to emphasize opening up a dialogue between the students and presidents, as well as showing students that they are much more than their titles.

The SURC Pit seats were filled with about 30 bodies, of students and faculty alike. Sophomore and Political Science Major Dominic Choi said events such as this are crucial to changing the way we perceive the administration, and that other administrators should get involved.

“Some people think of the presidents as like, all stuffy. It was nice to see them in a more relaxed environment,” Choi said.

Associate Dean of Student Success Jenna Hyatt said she thought Coffee with Presidents was a success, and charming to boot. She said she had always known Gaudino to be an approachable man, and that this was a prime opportunity for everyone else to see what she sees. Hyatt added that she thinks Coffee with Presidents should be made a tradition at CWU, and include other members of the student and administrative government.

Zug said he got a kick out the event, especially when he asked Gaudino what type of video games he plays. Gaudino answered that he occasionally jumps on his Xbox to play “Halo”, although, he said his skills are a bit lacking.