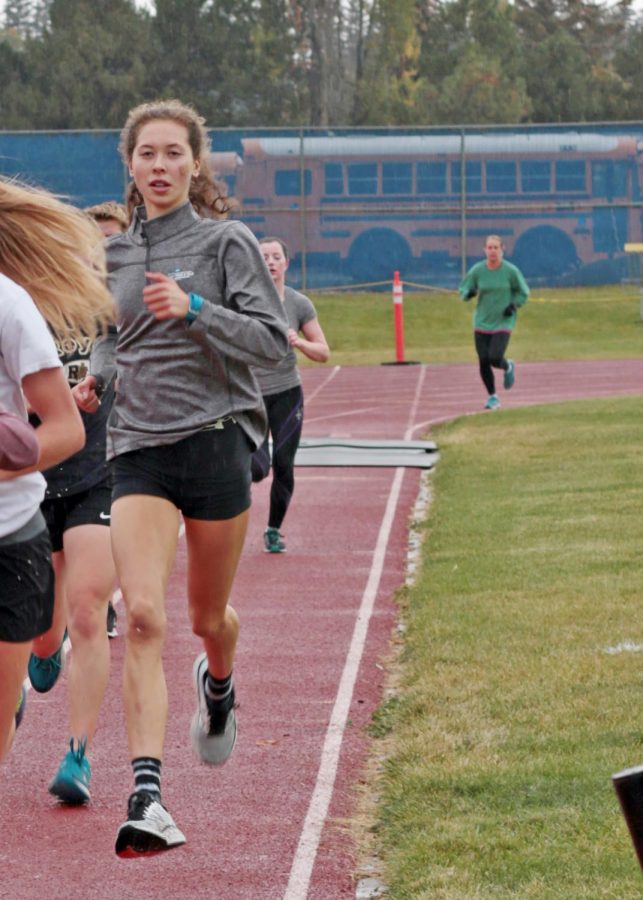 While the rest of us are inside sipping hot cocoa on these crisp autumn mornings, Nicole Soleim and her teammates are training for their next cross country meet. In what is just her sophomore season, Soleim has risen through the ranks to be not only one of the top runners on her team, but also within the GNAC.

Soleim came to CWU one year ago from Kentwood High School, where she was a top runner in her area. She continued her success at CWU by placing well in the 2017 GNAC cross country championships her freshman year, with a time of 23:44.4, one of the best times of any of the freshmen at the 6K meet. This and her team’s placement that year allowed Soleim to compete in the regional championships a couple of weeks later.

The NCAA Division II West Regional Championships was a place for Soleim to gain experience in her freshman season and a place for her to show further improvement. Soleim was able to do both of these things by improving her time from the GNAC Championship by a whole 50 seconds. This stellar end to her freshman year campaign propelled Soleim into a quality sophomore season.

The summer got off to a worrying start this year when Soleim ended up breaking her toe. Never one to let an injury stop her, Soleim rehabbed her broken toe  and fought through the pain to compete this season at a top level. The team set up a training plan that allowed her to train as hard as possible without risking further injury on the toe.

Soleim’s teammates noticed early on how tough she was when it came to fighting through her injury. One of her training partners, freshman Molly Mattson, felt that Soleim’s toughness has contributed to her success as a cross country runner.

“Nicole is gritty and tough and does not let pain phase her. She pushes through adversity and brings others along with her. She never stops believing,” Mattson said.

This training plan has worked as Soleim has continued to improve her times with each passing meet. Typically, Soleim trains with freshman Madison Child and Mattson, each pushing the others to new success during practices and meets. Child has found practice more enjoyable when she trains with Soleim because she pushes Child to be the best runner that she can be.

“I look forward to practice because of teammates like Nicole who inspire me to work hard while also being someone that can make me laugh and can keep me smiling through the toughest of workouts,” Child said.

This kind of chemistry has not only helped both girls have stellar seasons, but it has helped the team as a whole turn in another solid season. On Saturday, Nov. 3, the CWU men’s and women’s cross country teams competed in the 2018 GNAC Championships and Soleim thought that the team would be able to surprise some people with a top-five finish.

“I think we’ve been a little bit underestimated throughout this entire season,” Soleim said.

This, however, wasn’t the only goal that Soleim had in mind, as she had set a personal goal of breaking the 22-minute mark in the 6K, which the GNAC Championships gave her an opportunity to achieve. To beat this mark would mean that, in a year, she would have brought her time down by more than a minute.

According to Child, when it comes to setting goals, Soleim has a knack for achieving exactly what she set out to do.

“Once she has something she wants to achieve, she shares her goal aloud – almost as if she is speaking it into existence. This sheer determination and confidence in herself then allows her to succeed throughout the race,” Child said.

That’s precisely what Soleim was able to do in Monmouth, Oregon for the GNAC Championships. She fought and clawed her way to a sixth-place finish and to top it off, she attained her goal of cracking the 22-minute mark in the 6K.  Her new personal record is 21:42.8 in the 6K distance, which shatters her mark from the previous year.

So as to not to fall short of her team goal, Soleim helped the team finish in the top five as well. The whole CWU Cross Country team looks to perform even better at the West Regional meet in two weeks. The NCAA West Regional Championship will be in Billings, Montana on Nov. 17, so make sure to cheer on Soleim, Child, Mattson and the rest of the team.