Indoor track back in session at CWU 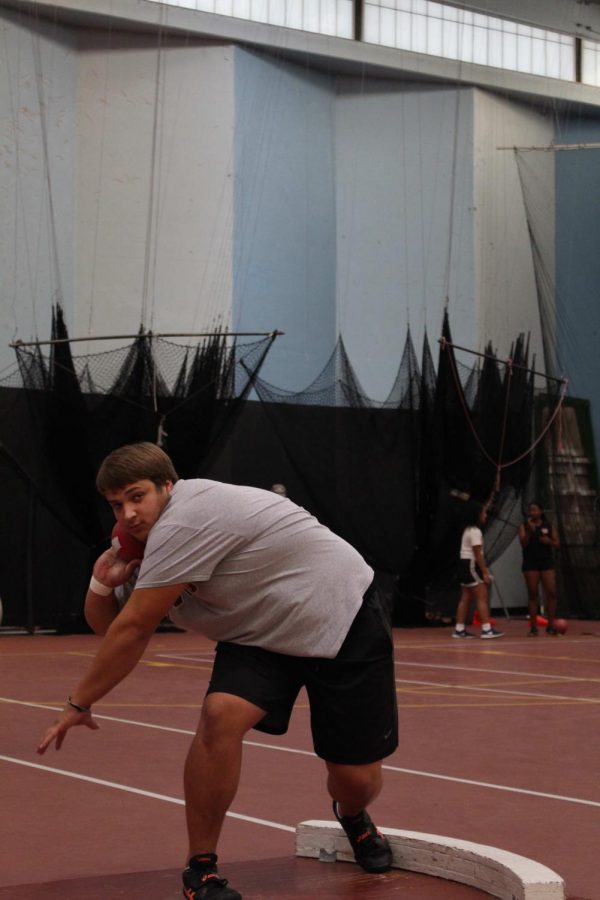 Riley Maier practices shot put in the field house at Nicholson Pavilion. The indoor season will officially begin when the team heads to the Candy Cane Open at Eastern Washington University on Dec. 1.

CWU Indoor Track and Field sets their eyes on the 2018-19 season looking to fly high into the GNAC Championship. According to senior HarLee Ortega, in 2017, the Wildcats were able to achieve a lot in terms of finishing tied for GNAC Champions, but this year they’re striving to take the title home alone. The GNAC has been dominated by Seattle University and Alaska Anchorage since the GNAC has been a conference.

“We were only the third team in GNAC history to ever win a title, so we would like it to just be ours and not have to share it,” Brittany Aanstad said.

CWU will continue to rock their team motto all year which is short and sweet and that is “ Excellence”.

HarLee Ortega is a Division II athlete from Payette, Idaho, who has had a knack for competition, dating all the way back to fifth grade. She got her start in track and field when her fifth grade teacher told her that she would enjoy it, and most likely be very good at it. From that point on, she was hooked and she was notably one of the best players in Idaho, if not the nation. Ortega was up-front about not being great at the mile, but said that she wanted every event and she was determined to be the best at all of them.

When it came to her senior year in high school, Ortega was getting attention from colleges, most notably Nevada University, but when coach Brittany Aanstad called her and recruited her to be a Wildcat with a scholarship, Ortega jumped on the opportunity. .

“I want to be the best version of myself,” Ortega said.

Ortega is one of the most decorated track and field athletes at CWU. She holds the school record in the triple jump, heptathlon and pentathlon. She was GNAC Champion in outdoor triple jump, and she is an All-American in the heptathlon and pentathlon. As a freshman, Ortega dealt with stress fractures that hindered her from performing at her best, but she hasn’t let that slow her down.

Now a fifth-year senior, Ortega isn’t planning on pursuing track and field after she graduates. Ortega is a recreation and tourism major specializing in event planning and hopes to become a wedding planner.

The Candy Cane Open in Eastern Washington on Dec. 1 is where the Wildcats  will start their journey to becoming GNAC Champions.