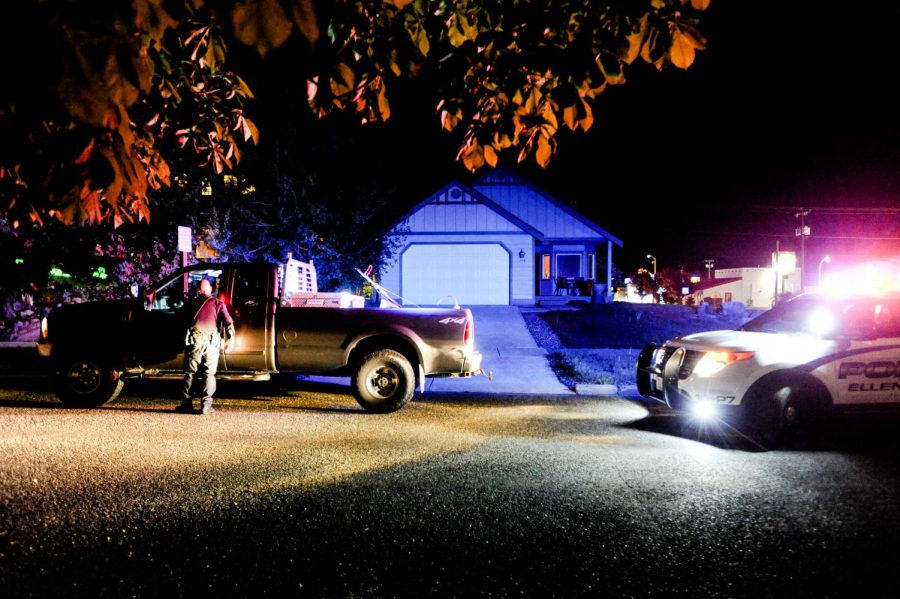 An Ellensburg police officer performs a traffic stop at around 1 a.m. on a Thursday night.

Every weekend hundreds of students descend on the downtown Ellensburg area like a plague of locusts. The rabid pack of wildcats hit the downtown bars like clockwork in search of cheap alcohol and much needed relief from the week’s stresses.

With more than 11,000 students enrolled in classes at CWU the task of policing and keeping the peace amidst the horde of collegiate students falls squarely on the Ellensburg Police Department.

After an article published by The Observer in April related to an incident outside of Club 301 where an African-American male was cited for disorderly conduct the EPD invited The Observer to join officers on foot patrol to experience a night from the officer’s perspective.

According to Captain Dan Hansberry of EPD, the department has been doing foot patrols for over 25 years and the foot beat is an integral part of law enforcement in Ellensburg.

The EPD currently schedules foot patrols every Thursday, Friday, Saturday and Sunday of the week due to the large amount of foot traffic found in the city on those days.

Law enforcement can appear intimidating at times, especially to inebriated students. Hansberry says that officers on the downtown foot beat are simply there to keep the peace and resolve issues.

According to Hansberry during a month of foot patrol, officers interact with around 400 students and within those interactions only a handful receive citations. The number one citation issued during the downtown foot patrol is disorderly conduct followed by public urination.

On Thursday, officers Stephanie Druktenis and Derek Holmes responded to and resolved a variety of calls including a traffic stop made on foot by chasing down a sedan that was going the wrong way down a one-way street on the corner of Fourth Avenue and Pine.

20 minutes later true to Hansberry’s prediction a young man began urinating in an alleyway with his back turned to a port-a-potty.

Less than 10 minutes later in the same alley a second student began urinating behind a dumpster. Before he was cited, officers yelled out to him as a warning and he ducked down in an attempt to escape the long arm of the law.

Officer Druktenis said she takes personal offense when it comes to public urination during the downtown foot patrol because she has small children who love to touch everything.

“It’s disgusting,” Druktenis said. “Sometimes I see kids rolling around on the floor and I want to tell their parents what was there two days ago.”

During the two citations for public urination, a group of students gathered around the alley and formed a crowd. Some were upset that the students were receiving a ticket.

Druktenis says that students often complain to officers asking for a pass from citations because of the fact that they are students and already pay enough money to go to school. Students who attempt this never get a reprieve and Druktenis says the requests come from a lack of life experience.

According to Hansberry students don’t receive special treatment from the department.

“On our point of view the student is treated no differently than any other member of the public. In other words if you commit a crime whether you’re a student or not a student it’s the same. You’re going to be treated the same way.”