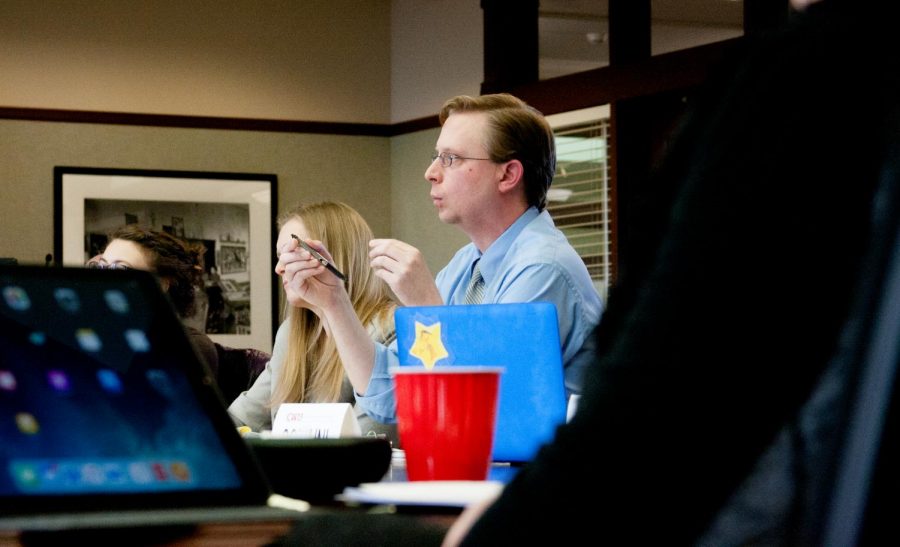 Having a place to go where people can voice opinions and concerns within a community is essential to keeping issues at bay. Faculty Senate meetings provide an opportunity for faculty and administration at CWU to voice their opinions and concerns. The first conference of the quarter was held on April 4 in Barge Hall.

A topic for all institutions is campus safety. CWU Police Chief Jason Berthon-Koch spoke to the audience about the status of campus safety. Faculty in Dean Hall expressed concern that the doors in the building are not lockable from the inside and they open outwards, making it difficult to barricade the doorway.

“We are fairly safe…. We are an open and inviting campus,” Berthon-Koch said. He reminded the staff that they are responsible for themselves and that their students are responsible adults as well. His advice to anyone in an active shooter situation is “run, hide, fight,” the same protocol recommended by the Department of Homeland Security.

CWU’s student population has grown over the past few years and will continue to do so in the future. With that growth comes the need to ensure that CWU has the resources to handle student-used programs such as Canvas.

“We had a downtime of 43 min… our goal is to be at four minutes,” Bohman said.

Even though 43 minutes of downtime per month  isn’t a huge amount, Bohman realized the impact it can have on students.

“We see ourselves as an integral part of student success,” Bohman said. “We take this seriously.” The Information Security Services Department spent 40,000 of its $9.2 million annual budget on more hardware and storage to build toward the goal of only  four minutes of downtime per month

The film department adjusted its curriculum by creating two new minors: screenwriting and cinema studies, both of which used to be offered as majors.

“It was cost prohibitive to offer three degrees when 90 percent [of students in the major] were in Film Production,” Film Program Director Jon Ward said. Over the last three years the department’s curriculum has been re-envisioned.

“It’s a nice clear vision… the curriculum is much more rigorous,” Ward said. “We want our students to be prepared.” The department will be more effective because the course work will be ordered. To find out more information regarding the curriculum, see the link below

Finals week is tough on everyone involved. It becomes even more stressful when a class doesn’t finish within their two-hour window. Supervisor of Academic Scheduling Amy Alder said, “The finals schedule is done automatically… A system does it on a matrix.” She said that after the schedule is generated, it’s advised that professors and instructors check for conflicts because although it’s rare, it can happen.

“We already talked to registrar’s office about the issue,” Alder said. The last final is taking place between 6 and 8 p.m., it would be tough to push the schedule back even 10 minutes to create more time between finals.